Home
Stocks
Market Extra: Oil prices are on the brink of logging fastest slump to a bear market in about 4 years
Prev Article Next Article
This post was originally published on this site 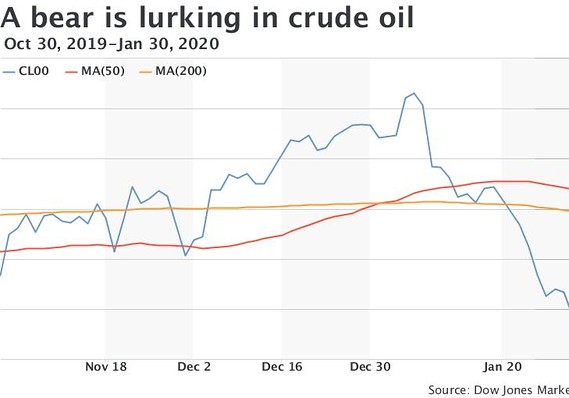 Oil prices on Monday sank, extending a recent brutal slump and putting futures on the verge of a bear-market settlement, amid rapidly rising concerns that the coronavirus outbreak could wallop China’s already sluggish economy and ripple through the rest of the globe.

Entry into a bear market is defined by a price drop of at least 20% from a recent high.

A settlement below $50.62 would push it into a bear market, according to Dow Jones Market Data.

Meanwhile, Brent UK:BRNH20, the international benchmark, wasn’t faring much better. The commodity was down 3.5%Monday afternoon and off by more than 20% from its recent high of $69.02, hit Sept.16, 2019. Brent crude will enter a bear market with a close below $55.22.

Chinese President Xi Jinping said the coronavirus, which has sickened more than 17,500 people and killed more than 360, was a major test of the country’s system of governance, and vowed consequences for officials who shirk responsibility in tackling the crisis, according to the Wall Street Journal.

“Anyone who fails to perform their duties will be punished according to discipline and law,” Xi said, according the Journal, citing Xinhua News Agency.

The World Health Organization officials declared the viral outbreak a public-health emergency of international concern last week and the Trump administration’s coronavirus task force said it is imposing measures to curb the influenza, including banning travel to China.

The illness has been likened to SARS, severe acute respiratory syndrome, which caused disruptions to markets in 2002-03. The virus reportedly originated in Wuhan City, China, but has spread rapidly since being first identified back in Dec. 31.

See: What the 2003 SARS epidemic tells us about the potential impact of China’s coronavirus on oil and metals

The spread of the virus came ahead of the Lunar New Year celebration, which begins on Jan. 25 and can last through to the Feb. 8 Lantern Festival. It is a significant travel period for the Chinese, raising the potential for further spread of the illness.

Read: Coronavirus is less deadly than SARS — but that may explain why it’s so contagious