Home
Stocks
Market Extra: Tesla’s surging stock is starting to remind Wall Street of bitcoin’s parabolic rally in 2017. Here’s why
Prev Article Next Article
This post was originally published on this site 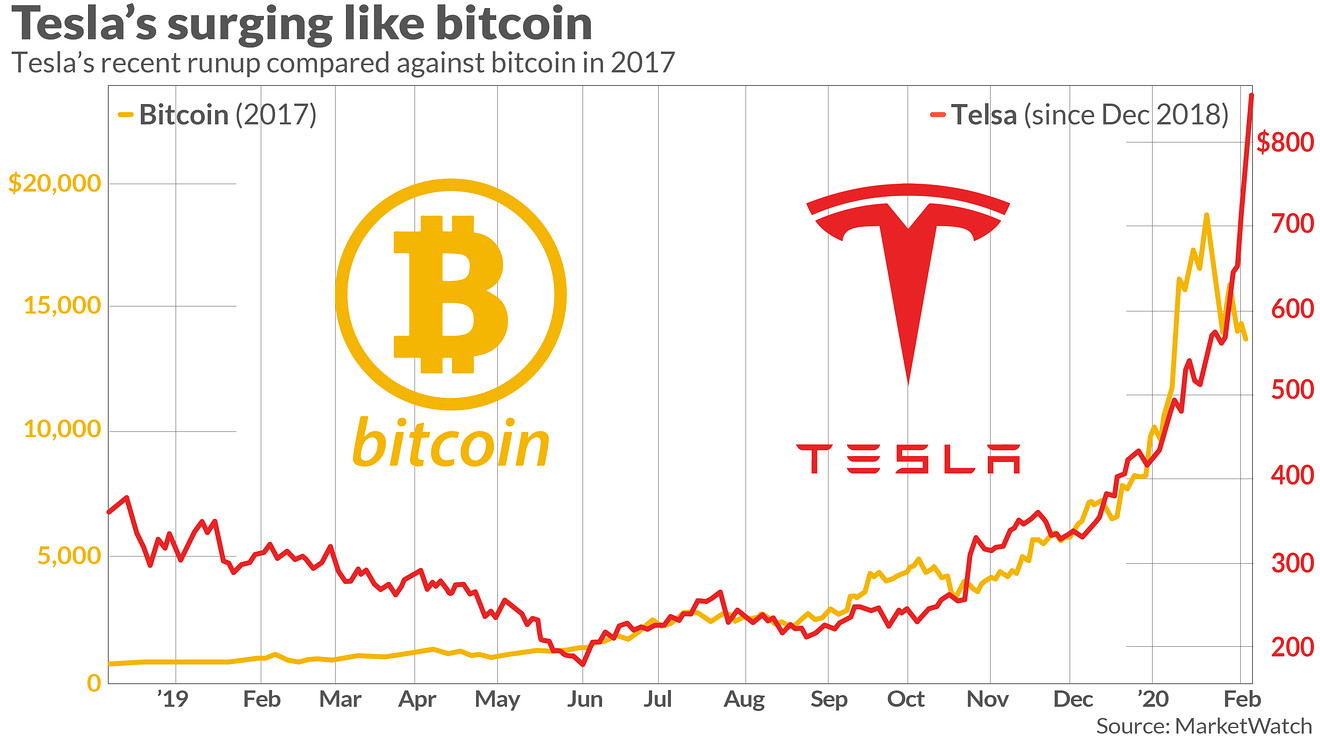 Tesla Inc. is on a tear. Not just any ordinary tear for shares of a popular company whizzing to records on Wall Street. The ascent for shares of the electric-vehicle maker are near-parabolic and the unabashed run-up in recent days has some investors comparing the jump to bitcoin’s surge back in 2017.

To put things in perspective, Tesla’s shares TSLA, +13.73%  have risen 36% to a record price around $887 in just the past two sessions alone. The Silicon Valley darling run by Elon Musk has jumped 180% in the past three months and from its June 3 closing low at $178.97, the company’s shares have gained more than 395%.

Tesla’s outsize gains, predicated partly on more bullish calls from analysts and better quarterly results from the vehicle maker, have raised eyebrows among some Wall Street investors worried that gains have come too far, too fast.

Novogratz famously in 2015 left the world of private equity, after helping found Fortress Investment Group, to venture in to the world of digital currencies.

Of course, it is clear how that story played out. Bitcoin’s price cratered soon after peaking.

However, on the bright side, it is still up at $9,140, which may be cold comfort for those who bet on further gains in the No. 1 digital asset in the world.

Prominent analyst Tom Lee of Fundstrat said that some of Tesla’s gains may be attributed to investment managers in the Russell 1000 Growth RLG, +1.96% adjusting their portfolios to line up better with Tesla’s weight in that index.

“In other words, [the fear of missing out] of Russell 1000 Growth managers is likely contributing to this stupendous surge. Last year, Tesla return was roughly in line with market and it was quite volatile, so many managers likely underweighted Tesla,” he wrote.

In any case, many market watchers are advising caution when it comes to buying Tesla now, with one of the top searches on Google being: “Should I buy Tesla’s stock?” That is similar to the days of bitcoin when investors would input similar internet searches.