Home
Stocks
Market Extra: The Dow is on pace for its worst month since the Great Depression, but here’s why all hope isn’t lost amid the coronavirus stock rout
Prev Article Next Article
This post was originally published on this site

The month of March has rolled in like a ferocious lion for bullish stock-market investors, leaving little but carnage in its aftermath, as uncertainties about the effects of the coronavirus outbreak abound.

The decline for the Dow Jones Industrial Average DJIA, -4.55% has been simply gut-wrenching for the average investor, with the monthly plunge so far for the nearly 124-year-old, blue-chip gauge poised to represent its steepest since 1931 — a year that falls within the Great Depression, the worst economic crisis in U.S. history.

The Dow has shed a staggering 6,235 points, or 24.54%, in March so far, which has dragged the stock index down to its lowest level since December of 2016. The percentage drop so far ranks as its second-worst in history after the 30.7% monthly skid in September of 1931, when the unemployment rate was at a lofty 15.9%.

The velocity of the dive has been stunning.

Besides obliterating the bullish trend the plunge has done a lot of technical damage, with a bearish, so-called death cross forming in the Dow, where the 50-day moving average — which many chart watchers use as a short-term trend tracker — crosses below the 200-day MA, which is widely viewed as a dividing line between longer-term uptrends and downtrends.

So is all hope lost for investors anticipating a turnaround?

It is important to note that the market’s reaction isn’t necessarily irrational to experts. The emergence of COVID-19, the infectious disease first identified in Wuhan, China, in December that has infected nearly 300,000 people globally and claimed almost 12,000 lives, is unlike any crisis markets have faced in generations.

It has required unprecedented actions by the central banks and governments across the globe because the disruptions to global economies and supply chains is likely to throw the U.S. and other economies into a recession.

Business and consumer activity have ground to a halt to mitigate the pandemic’s spread.

See: It will take a $1.5 trillion stimulus to save America, former Fed economist says

And the length and severity of the illness isn’t yet clear, though some are expecting peak infections to occur in the next 45 days or so.

That said, a number of investors are hopeful that the market will begin to regain its footing, even if it declines further in the next few weeks and if the country slides into a recession.

Here’s the outlook from a few strategists, economist and investors:

‘The massive amounts of stimulants being injected into the financial markets will likely avoid a total collapse of the global economy; it is, however, too late to forestall a moderate to shallow recession, which has already started.’

Peter Cardillo, chief market economist at Spartan Capital Securities says the emergency actions undertaken by the Fed and elsewhere in government may soften the length of the coming recession.

Cardillo added the “collapse in the stock market in such a short period of time suggests the worst fears of the unknown are being discounted. Indeed, calling a bottom is very difficult, but value is beginning to pop up in many sectors,” he said.

“The good news is that will springload the recovery.”

Anthony Scaramucci, the former White House communications director and the founder of hedge fund SkyBridge Capital, told MSNBC during a Saturday interview he expects another 10% drop is likely before the markets stabilize.

However, he believes that an effective stimulus package could help give the economy and markets a big lift. Larry Kudlow, the director of the National Economic Council, on Saturday said that a rescue package to help lessen the impact of the epidemic could top $2 trillion.

‘The Wuhan lockdown lasted 50 days, which means that the US and Europe should be prepared that we may get to early May before we begin to see some normalization in economic activity.’

Torsten Sløk, chief economist at Deutsche Bank Securities, says that the recovery in Wuhan, where the virus reportedly originated, could hold some clues for the U.S.

Sløk notes that the lockdown in the Hubei province capital lasted 50 days and extrapolates that based on current attempts to limit the movement of people in the U.S. economic activity may return to normal by May, with a market rebound, perhaps, in anticipation.

“The Wuhan lockdown lasted 50 days, which means that the US and Europe should be prepared that we may get to early May before we begin to see some normalization in economic activity. Markets, however, are likely to rebound before, and many conversations this week have been about what the rebound will look like,” he wrote in a Saturday research note.

However, the economist, said that in the wake of the so-called Spanish flu in 1918, where between 50 million and 100 million people are thought to have died, the Dow’s rebound was more subdued. 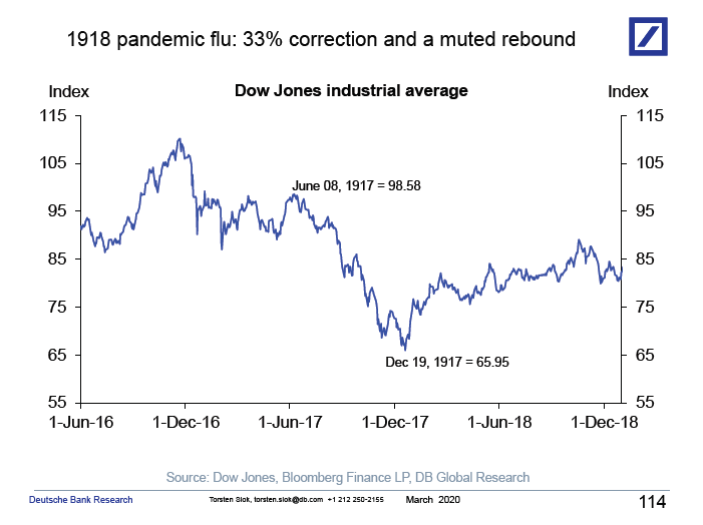 But Sløk says that measures that have been taken thus far, and those that likely will be taken, could foster a stronger rebound.

But it’s far too early to call a bottom in the current market downturn.