Home
Stocks
Market Extra: The U.S. dollar’s unwelcome surge relents — will it resume?
Prev Article Next Article
This post was originally published on this site

The U.S. currency’s relentless rise as a result of worldwide scramble for cash — specifically, U.S. dollars — relented on Friday.

A calmer dollar could go a long way toward taming the extreme volatility that has rocked financial markets as investors deal with the COVID-19 pandemic, investors and economists say.

The ICE U.S. Dollar Index DXY, -0.13%  , a measure of the U.S. currency against a basket of six major rivals, was off 0.5% Friday at 102.27 after hitting a series of more-than-three year highs earlier in the week. The index is on track for a 3.6% weekly surge, which would be its strongest since a 4.9% weekly rise in October 2008, when a similar scramble for dollars helped push up the currency.

Read: The U.S. dollar refuses to stay down — here’s why

“Like it or not, the U.S. dollar is the world’s reserve currency and, therefore, the axis upon which the global financial system turns,” said Matt Weller, global head of market research at GAIN Capital, in a note.

See: How a ‘disorderly’ U.S. dollar is adding to the stock-market rout and adding to volatility

The dollar soared this week as investors liquidated positions across a range of assets, including traditional havens like gold and U.S. Treasurys, in a rush to meet margin calls and raise cash. Businesses around the world drew down bank credit lines, with foreign firms that have borrowed in dollars scrambling to secure the currency amid fears dollar revenues will dry up.

The Fed over the past week took a series of steps aimed at addressing the dollar squeeze, including lowering the rate on existing dollar swap lines with major central banks and increasing the frequency of swap operations, while also establishing new swap lines with central banks for other countries.

That scramble was seen adding to the dollar’s rise, particularly against emerging market countries where the collapse in the oil price amplified downside pressure on some currencies. The rise in the dollar contributed to a vicious cycle that led to more indiscriminate selling across markets that in turn reinforced the currency’s rise.

Analysts credited the central bank swap lines with helping to ease the funding crunch on Friday, but weren’t ready to declare the dollar crunch over.

The surge in demand for dollars blew out the cross-currency basis, a measure of how expensive it is to borrow dollars (the more negative the number, the higher the borrowing costs). As of Friday morning, the euro-U.S. dollar basis swap had returned to almost zero basis points, indicating some stress in the dollar funding market had been reined in, though it remains volatile, said Chiara Cremonesi, fixed-income strategist at UniCredit, in a note (see chart below). 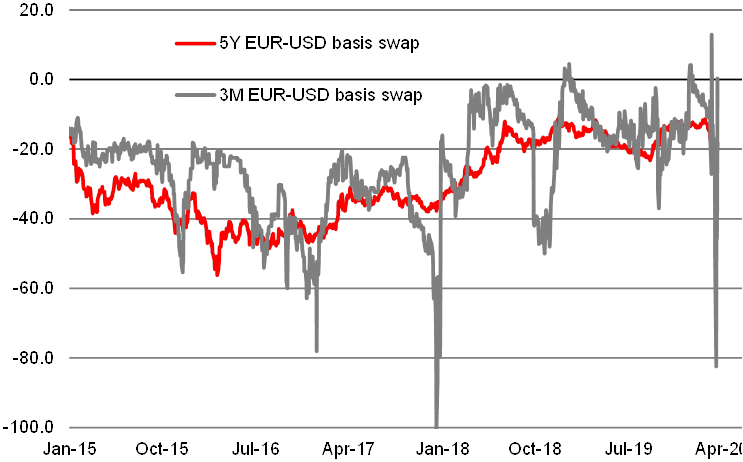 “While the Fed has been very responsive in announcing a comprehensive set of measures to address U.S. market dislocations, with the current level of uncertainty in the economic outlook, we believe disruptions in U.S. funding markets may not be behind us,” she said.

While econonomists have argued that progress toward slowing the spread of COVID-19 and stabilization of financial markets would likely set the stage for longer-term dollar weakness, analysts said the DXY remains technically poised for more gains.

“As of writing today, the greenback is actually the weakest major currency. Whether that’s due to the aggressive actions by governments across the globe, the Federal Reserve’s rapid monetary easing and crisis-era responses to ease financial conditions, or mere profit-taking ahead of the weekend, the medium-term technical outlook for the US dollar remains bullish following the big breakout above the 100.00 level earlier this week,” Weller said.