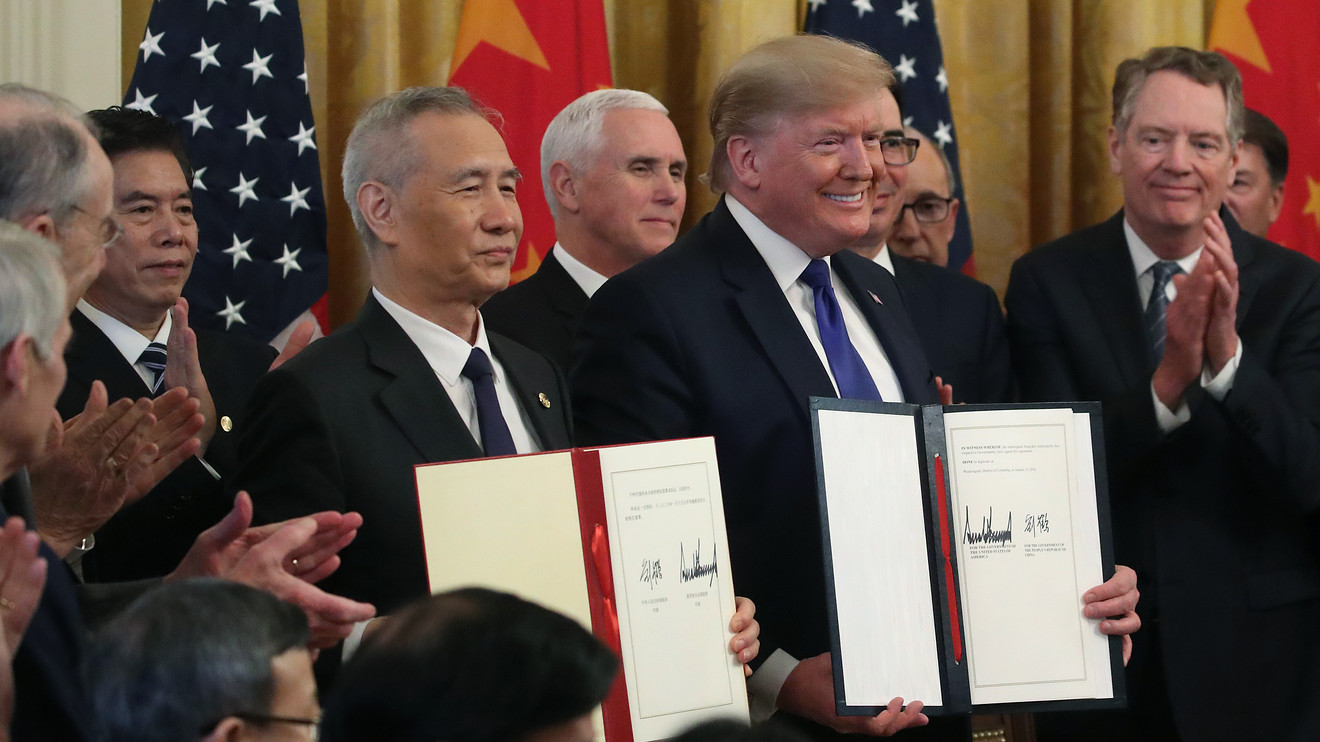 Markets appear to be impressed by the substance of the U.S.-China trade deal, unveiled by President Trump at a White House signing ceremony Wednesday.

The Dow Jones Industrial Average DJIA, +0.92%, S&P 500 SPX, +0.84%  and Nasdaq Composite COMP, +1.06%  indexes all surged to new intraday records on Wednesday, with further gains on Thursday, in the wake of the deal’s announcement, with investors and analysts praising the details found in the 96-page document.

“The critics of the trade deal underestimate some of the accomplishments the Trump administration was able to achieve,” Michael Arone, chief investment strategist with State Street Global Advisors told MarketWatch.

He added that the market wasn’t expecting China to commit to purchasing as much as $200 billion in additional U.S. imports over 2017 levels in calendar years 2020 and 2021, nor did investors predict that manufacturing and energy products would compose such a large portion — $115 billion — of the overall commitment.

Arone also lauded the new bilateral dispute mechanism that will give U.S. companies a new avenue for raising complaints about intellectual property and an enforcement mechanism backed by the threat of new tariffs.

“These are solid achievements,” Arone said. “There’s real teeth to this deal.”

Unfortunately for stock-market bulls, however, investors and analysts told MarketWatch that the deal will likely fall short in creating an environment of certainty for businesses hoping to plan new capital investments — and therefore fail to boost economic or corporate profit growth.

David Bahnsen, chief investment officer of The Bahnsen Group, which manages $2 billion, said, “It strikes me as incredibly obvious that there will be more volatility and trade flip-flopping, more threats” by the president to major trade partners.

Bahnsen said these new threats could be toward China, if it isn’t acting aggressively enough to meet import targets, but that Europe is also a likely target. “The president won’t suffer politically with his base to start jawboning Europe, and yet it would create volatility in the market that isn’t currently appreciated.”

The White House has threatened to impose tariffs on $2.4 billion in French exports in response to a new digital tax France instituted, which the administration says is aimed at U.S. firms. In October, the Trump administration imposed new levies on $7.5 billion of EU exports, in retaliation for what the World Trade Organization agreed is unfair subsidies to Leiden, Netherlands-based aerospace company Airbus SE AIR, -0.64%, and it has still hasn’t revoked threats to impose tariffs on European auto parts and automobiles, which analysts have predicted would be a major problem for auto makers globally.

Meanwhile, the trade deal only rolled back a fraction of the new tariffs imposed by the U.S. and China during the past two years, with the U.S. keeping tariffs of between 7.5% and 25% on $370 billion in Chinese exports and China maintaining retaliatory duties on $110 billion in U.S. exports. JPMorgan analyst Dubravko Lakos-Bujas estimated that these already-existing tariffs are imposing an annual cost of $600 per American household and $5 in per-share earnings for the S&P 500.

“Nothing in phase one will specifically add much to global [economic] growth,” wrote Tom Essaye, president of the Sevens Report in a Thursday note to clients. “All we need to do is look to Treasurys and market internals to see that.”

“Yesterday, on a day when the trade war truce became official, the 10-year Treasury TMUBMUSD10Y, +0.93%  yield fell to a six-week low an the yield compressed further,” he said. “Similarly, cyclical stock sectors, which stand to benefit the most from a rebound in global growth, lagged behind defensive sectors.” That said, the benchmark bond has mostly been trading in a range between 1.71%-1.95% in January.

Some strategists make the case that, despite major equity benchmarks marching to new highs, the fundamental case for current valuations is becoming weaker, given tepid earnings growth, and likely won’t be helped much by the effects of a trade truce.

Another headwind that could blunt economic benefits of the deal is rising political uncertainty, as the outcomes of both congressional and presidential elections foster an element of uncertainty that isn’t ideal for business planning. The outcome for the 2020 presidential race and the composition of Congress are acutely significant because the economic policy platforms of the Republican and Democratic parties are as divergent as they have been in generations, increasing the potential for volatility on corporate business strategies, notably surrounding tax rates and regulatory posture.

“Investors have set themselves up for some disappointment if we don’t see follow through to much better numbers going forward.” said State Street’s Arone. “It will likely take a couple quarters to play out, that’s why investors are underestimating the impact of a too-close-to-call election on business confidence.”