Home
Stocks
Market Extra: Why low rates are raising questions about the next commercial real estate unwind
Prev Article Next Article
This post was originally published on this site

Rents may be too damn high for apartment dwellers, but they look pretty weak for the rest of the U.S. commercial property market as prices skyrocket.

That might not be a problem now, particularly as the Federal Reserve reaffirms its plan to keep rates low, its balance sheet available and credit spigots open.

Yet analysts at BCA Research see potential trouble when the next downturn comes for office buildings, shopping centers and industrial properties that were purchased in the past decade at soaring prices.

This chart shows sagging rents at most U.S. commercial property types since the 2007-’09 recession, even as property prices have eclipsed their prior peak. 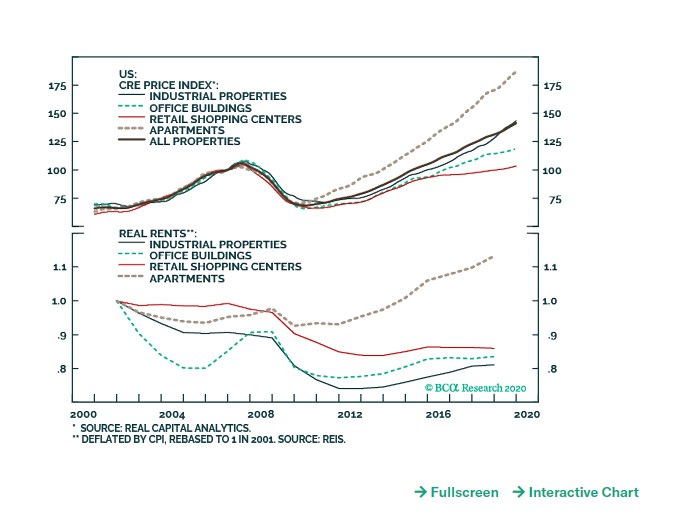 But in the new era of negative yields globally, investors have been willing to plunge capital into riskier assets at lower cap rates, even as valuations have hit uncharted territory and their investments might offer only slightly more yield than haven assets like U.S. Treasury debt.

The yield on the benchmark 10-year Treasury note TMUBMUSD10Y, -0.17% fell to 1.593%, its lowest since early October, on Wednesday, spurred by buying after Fed Chairman Jerome Powell opted to hold interest rates steady at 1.5% to 1.75%, but also indicated the central bank would be monitoring any future economic fallout from China’s deadly coronavirus.

After the harsh blow of last decade’s subprime mortgage crisis, central bankers have expressed concerns about letting asset bubbles form in other parts of the market, including corporate debt and commercial real estate.

But even with the current U.S. expansion being the longest on record, few signs recently indicate that interest in owning commercial properties is slowing or that a domestic recession might be imminent.

Notable recent downturns in U.S. commercial real estate can be traced back to credit drying up, an economic slowdown or significant declines across specific industries.

Last year, after the Fed’s sharp U-turn on rates with three cuts, commercial property prices carved out fresh highs, increasing 7.8% nationally and 8.3% in non-major markets from 2018 levels, according to Real Capital Analytics data.

And the forecast this year is for another round of mid- to high-“single-digit” growth in commercial property prices, per analysts at BofA Global Research, who stressed that “not all property types” will benefit equally, in their most recent weekly note to clients.

The BofA team noted that apparel company Express, a part of the embattled fashion retailer L Brands, Inc. LB, +12.94% , stationery and greeting card chain Papyrus, as well as others are likely to keep retail “under pressure in 2020 as consolidation and store closures accelerate.”