Home
Stocks
Market Extra: Why the coronavirus outbreak could trigger a stock-market pullback
Prev Article Next Article
This post was originally published on this site

The spread of China’s coronavirus is providing stock-market investors with another reason for near-term caution as major U.S. equity benchmarks trade near all-time highs, analysts said, offering a potential trigger for a near-term pullback.

“Conditions in the broad market are ripe for a pause as sentiment measures and overbought conditions are at extreme levels. However, the missing ingredient to temporarily halt the advance in the market has been a catalyst,” said Jeff deGraaf, chairman of Renaissance Macro Research, in a Friday note.

Read: Here’s how the market has performed during past viral outbreaks

Indeed, financial markets remain sensitive to headlines surrounding the outbreak. U.S. stocks gave up early gains Friday, trading lower as the death toll in China mounted and after the Centers for Disease Control and Prevention confirmed a second case in the U.S. Cases have turned up in other countries as well, including Japan, Taiwan, South Korea and Singapore.

DeGraaf on Thursday highlighted the spread between bullish and bearish investors in the closely watched Investors Intelligence survey (see chart below). While bullish extremes aren’t as strongly contrarian as bearish extremes, the reading nevertheless added to a growing number of other sentiment extremes and indicators of an overbought indicators. 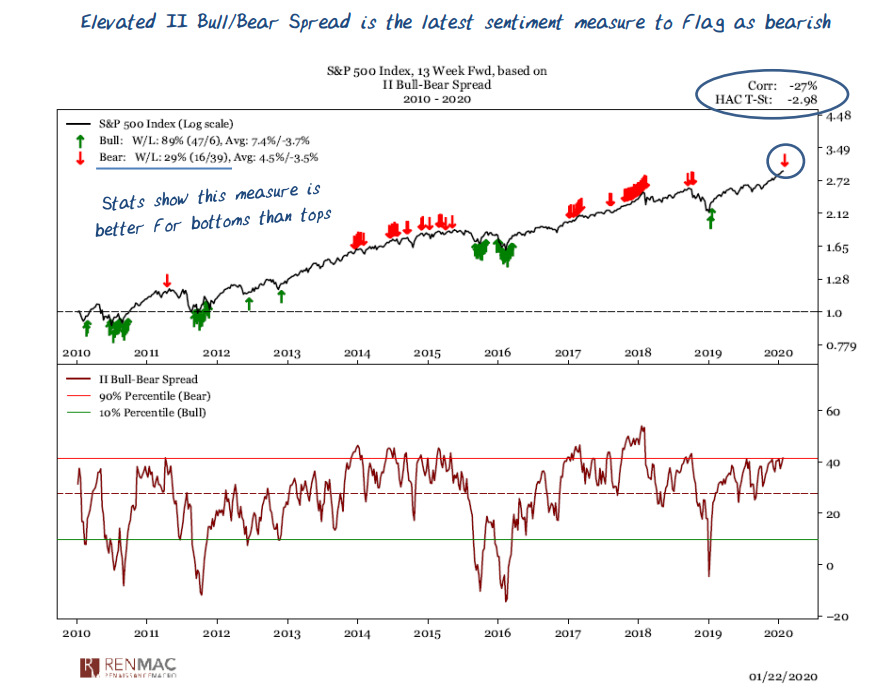 The percentage of respondents with a bullish view in the survey rose to 59.4%, while the American Association of Individual Investors’ survey saw its bullish percentage rise to 45.6%. Those are the highest bullish readings for both measures since October 2018, said Tony Dwyer, analyst at brokerage Canaccord Genuity, in a Friday note.

Dwyer, a long-term market bull who earlier this week said it was time to take the “offense temporarily off the field” and tactically move to a neutral position on stocks, highlighted a breakdown in the three-month correlation between individual S&P 500 components and the index, which fell to its lowest level since the first week of October 2018.

“In a new world of passive investing, it means investors are picking stocks rather than just buying broad equity exposure, and the current level represents a level of complacency that only existed late in 2017 and the fall of 2018,” he said. Stocks sold off sharply in the final quarter of 2018.

Dwyer also flagged the poor relative performance of consensus favorites, including financial stocks, small-cap stocks and emerging markets. He argued that the market and the information technology sector, which has driven the overall market to records, need a “reset” to clear the way for a sustainable move higher.

DeGraaf, meanwhile, said headlines about a potential pandemic could stir fears of an “exogenous shock” that would create doubt among investors and bring bullish sentiment readings back down from extremes.

“We’ve seen outbreak panics in the past and the resulting fear-based moves in the market have been buying opportunities,” he wrote, a phenomenon he suspects will hold true with the coronavirus.