Home
Stocks
Market Snapshot: What in the world can the Fed do to cure a coronavirus-stricken stock market that erased $4.3 trillion in 7 sessions?
Prev Article Next Article
This post was originally published on this site

A historic week for the stock market ended with a big, fat question mark: what will the government and the Federal Reserve do about the coronavirus outbreak that threatens to decimate the longest-running bull market on record?

Cases of the illness have stabilized in China, but its spread outside the country, nearly 60 in total, is what may have truly injected uneasiness into markets (see attached FactSet chart). 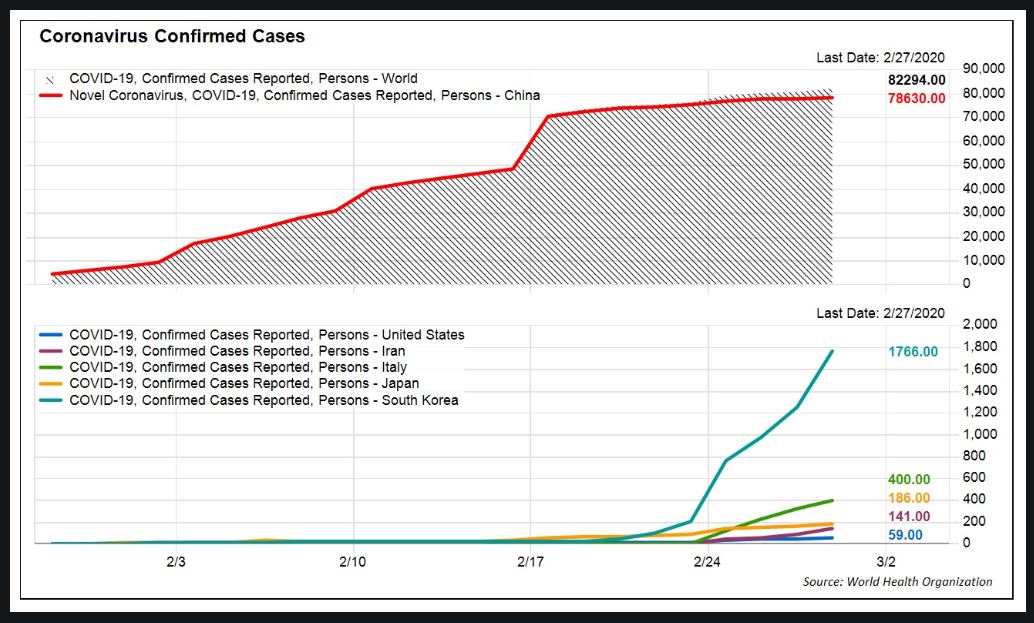 Approximately 84,000 cases have emerged, and almost 2,900 people have died, with several countries reporting their first incidences of Covid-19, including Brazil, Georgia, New Zealand and Norway.

In an op-ed in the New England Journal of Medicine on Friday Microsoft co-founder Bill Gates said the outbreak could be a once-in-a-century pandemic. “The data so far suggest that the virus has a case fatality risk around 1%; this rate would make it many times more severe than typical seasonal influenza, putting it somewhere between the 1957 influenza pandemic (0.6%) and the 1918 influenza pandemic (2%),” he wrote, adding that the Bill and Melinda Gates Foundation has committed substantial resources to prevent such diseases.

Check out: How the stock market has performed during past viral outbreaks, as coronavirus spreads to Italy and Iran

Those factors have, perhaps, sent risk assets into virtual free fall this week after mostly shaking off developments related to the virus since at the start of the year.

The structural damage to Wall Street’s bullish patina is undeniable, as the Dow Jones Industrial Average DJIA, -1.39%, the S&P 500 SPX, -0.82% and the Nasdaq Composite COMP, +0.01% indexes booked their worst weekly declines since the 2008 financial crisis and all three stock gauges fell into correction (a drop of at least 10% from a recent peak).

Those statistics don’t necessarily capture the severity and velocity of the move for stocks, which had only days before been putting in all-time highs. Indeed, the deterioration from the peak has been nothing short of breathtaking, highlighted by the S&P 500’s fastest slide from a record close to correction in history on Thursday.

All totaled, global equity markets wiped out $7 trillion from the Feb. 19 record for the S&P 500 and the U.S. market alone lost $4.3 trillion, according to Howard Silverblatt, senior index analyst at S&P Dow Jones Indices.

Here are the top 10 worst performers in the S&P 500 from the week, according to Dow Jones Market Data:

Read: Are stocks headed for a bear market? Here’s how far they would have to fall as coronavirus-fueled selloff continues

Reports late Friday from the Washington Post (paywall) suggested that the Trump administration may be discussing ways to avert further damage to the market and prevent a pronounced slowdown in the domestic economy. Proposals reportedly included fiscal measures like targeted tax cuts and other emergency actions.

CNBC reported that Trump has leaned on the Federal Reserve to intervene to help address the possible the fallout from the spread of coronavirus.

Fed Chairman Powell midday Friday delivered a rare, unscheduled statement, saying that the virus posed an “evolving risk,” and reiterated that he was closely monitoring the outbreak, which market participants took as implying that the central bank might be ready to cut rates further from the current 1.50-1.75% range. Markets are pricing in two Fed rates cuts for this year, with the 10-year Treasury TMUBMUSD10Y, +0.00%  yield, which moves opposite to price, ending Friday at a record low at 1.127%.

During a CNBC interview Former Federal Reserve Gov. Kevin Warsh argued in an op-ed in the Wall Street Journal that the central bank should take “immediate action” and jointly cut interest rates and explained his view on CNBC as well.

Reuters also reported on Friday that global central banks may be inclined to kick off efforts, if not coordinated moves, to help stem the expected problems from the spread of the illness.

‘But at this stage, how much help can additional rate cuts really offer?’

What makes the epidemic unique for financial markets is it has resulted in a rout driven by an event that is nonfinancial in nature and hard to incorporate into financial models.

How do you solve a problem like a virus?

Natural disasters have a sense of finality, trade wars may eventually be resolved, but the coronavirus has the potential to deliver lasting disruption to supply chains. And to think, the markets had been fretting a few short months ago about an unceasing tariff clash between China and the U.S.

“No matter how much the Fed cuts rates and stimulates consumer demand, it cannot eradicate the need for quarantine and travel barriers to arrest the spread of infection,” wrote Seema Shah, chief strategist at Principal Global Investors, in a Friday blog post.

It isn’t clear that the central bank can deliver the stimulus necessary to inoculate financial markets from fears of an infectious disease that could hinder growth and that has already dented China, the second-largest economy in the world.

Reports out of Beijing, Saturday local time, indicated that the country’s manufacturing activity for February fell to a record low. The official manufacturing purchasing managers index tumbled to 35.7 from 50 last month. Any reading below 50 signals contracting conditions. A separate reading on service also fell to record low, hitting 29.6 compared with 54.1 in January.

“Movement and activity is restricted in China, and China is at the center of many critical global supply chains,” wrote Katie Nixon, chief investment officer at Northern Trust Wealth Management, in a Friday research note before the data was released.

“Research suggests that even today about two-thirds of factories in China are still not operating properly, lacking supplies and labor,” she said.

Ultimately, the “most immediate impact of the growing spread of the coronavirus is on sentiment: People are fearful,” she said.

But it is the economic impact that investors are struggling to calculate. However, it is difficult to forecast for an epidemic that may hamstring developed economies for an undefined period. Morgan Stanley analysts on Friday speculated that three scenarios could play out for the epidemic and markets:

Already pre-emptive restrictions on travel are taking place in the U.S. Indeed, a number of corporations are advising employees to defer and limit certain types of travel both professionally and personally.

Read: How to Prepare for the Coronavirus

Central banks cannot, some strategists and economists argue, cure economies that are slowing due to a viral outbreak.

“It surely won’t take too much more negative economic data and infection news to prompt the Fed to deliver the rate cut the market is pleading for. But at this stage, how much help can additional rate cuts really offer?” Shah wrote.

That may explain why Powell’s comments on Friday offered only cold comfort for investors rattled by the epidemic and their inability to predict.

The result is that this downturn may be more than just a garden-variety correction and could possibly be a downturn that could send stocks into a bear market, ending a lengthy bull-run in its 12th year, some analysts forecast. That’s hard to fathom with a jobs market that has been outstanding and other parts of the economy that have been humming along.

However, the recent slide in markets has tightened financial conditions by one measure, according to Oxford Economics, which shows that one indicator of stress in the market is at its highest level since before Powell & Co. embarked upon a series of three, consecutive quarter-percentage point rate cuts in 2019: 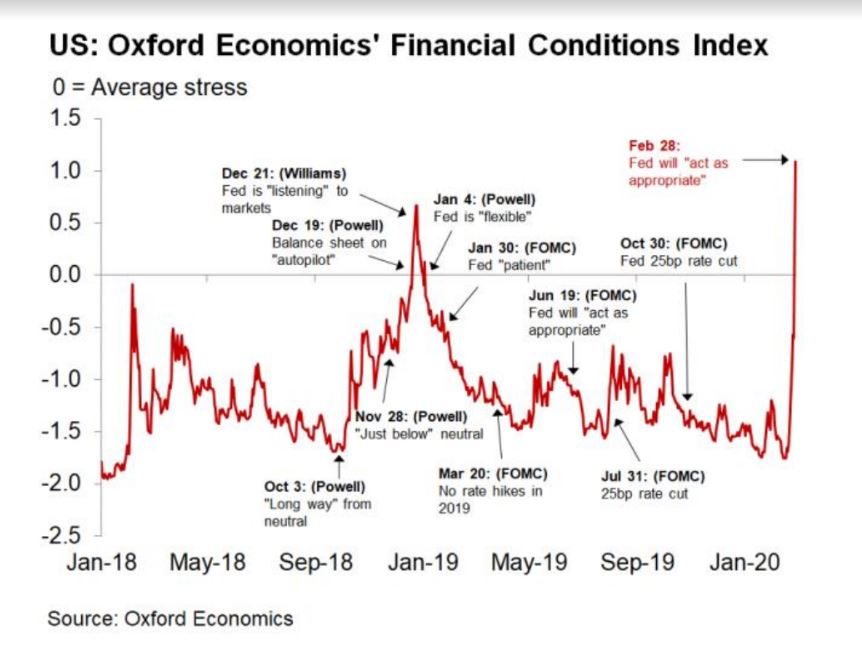 MarketWatch’s Joy Wiltermuth reported that cracks are, indeed, beginning to form. She said speculative-grade, or “junk-bonds,” saw credit spreads gap out by 100 basis points. Debt widening out is an indication of souring sentiment and rising costs in a key area of funding for corporations. Energy bonds have taken the brunt of the pain as crude-oil prices CL00, +1.12% have been one of the main casualties of the coronavirus outbreak because investors fear that the demand for crude could be hurt by the epidemic.

Oxford Economics forecasts that the U.S. economic expansion will be hurt, if the virus turns into something that is eventually classified as a pandemic by the World Health Organization.

“Our upcoming baseline will feature 2020 US GDP growth around 1.4% and Q1 growth flirting with zero. The second quarter is also likely to remain lackluster at 1.3%,” wrote senior U.S. economist at Lydia Boussour (see chart attached): 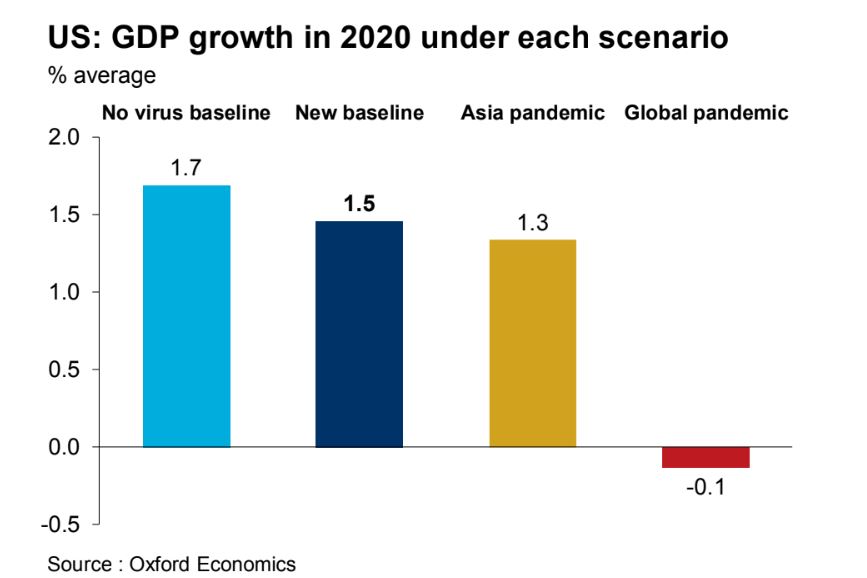 “Factoring the possibility of a coronavirus-lockdown in the US, we believe risks are heavily skewed to the downside,” she wrote.

Markets were certainly trading as if risks were skewed lower. Investors said that the action was characteristic of market that is selling off, with stocks and so-called safe-haven assets like gold also dumped indiscriminately.

One reason for the trading action has been compliance officers tightening the reins on trading shops and forcing investors to adopt more neutral positions, neither long nor short, as the week of selling intensified in the latter half of the week and altered the balance of investor portfolios.

“I think we’ve gone from de-risking to de-grossing,” Peter Tchir, head of macro strategy at Academy Securities told MarketWatch Friday midday. “People are being told to reduce their position sizes: ‘let’s just cut the long and the shorts’,” he explained of the strategies.

Some of that action may explain why gold GCJ20, +1.31% was driven to its worst daily loss in seven years even as the stock market, which usually moves in the opposite direction of bullion, notched its worst week in 12 years. Investors also may have been forced to sell gold, which already had a powerful run-up before this selloff, to meet margin calls, some strategists speculated.

Breakdowns in such correlations Tchir said are a signature feature of a market that is unwinding in a spectacular fashion. That includes previously beaten-down stocks like travel services and cruise operators like TripAdvisor Inc. TRIP, +3.21%, Booking Holdings Inc. BKNG, +2.16%, Royal Caribbean Cruises Ltd RCL, +4.43%, Norwegian Cruise Line Holdings Ltd. NCLH, +7.25%  and Royal Caribbean Cruises Ltd RCL, +4.43%, which all rose when they ought not to in an outbreak scenario.

The curious movements also came with a spike in volatility, with the Cboe Volatility Index VIX, +2.43%, a gauge of expected volatility, jumped to 40.11, marking its loftiest close since August of 2015, according to FactSet data.

In intraday terms, the Nasdaq Composite, which finished Friday’s trade in positive territory, for example, had been down by as much as 3.5% earlier in the session until notching its sharpest reversal since 2008, according to Dow Jones Market Data.

The stunning moves likely suggest that market may be nearing a so-called bottom—or simply unable to find purchase in this environment. But where things stand is anyone’s guess.

Traders said that the bulk of trading hasn’t felt panicky but noted that volatility borne of a virus is a different variable for investors to compute.

When will things level out?

Jason Katz, a UBS managing director and senior portfolio manager, on CNBC may have put it best: “We don’t need a rate cut, we need a vaccine,” he said. “And the only cure [the market needs] is time.”

Katz said he was advising his clients to use the weekend to “take a deep breath,” and said that corrections are par for the course even if this week felt less than normal.

That may turn out to be sage advice, even if taking that deep breath happens to be behind a N95 respirator mask.

Check out the CNBC video below:

Here’s what the week ahead looks like with the Friday jobs report likely the most important data point: 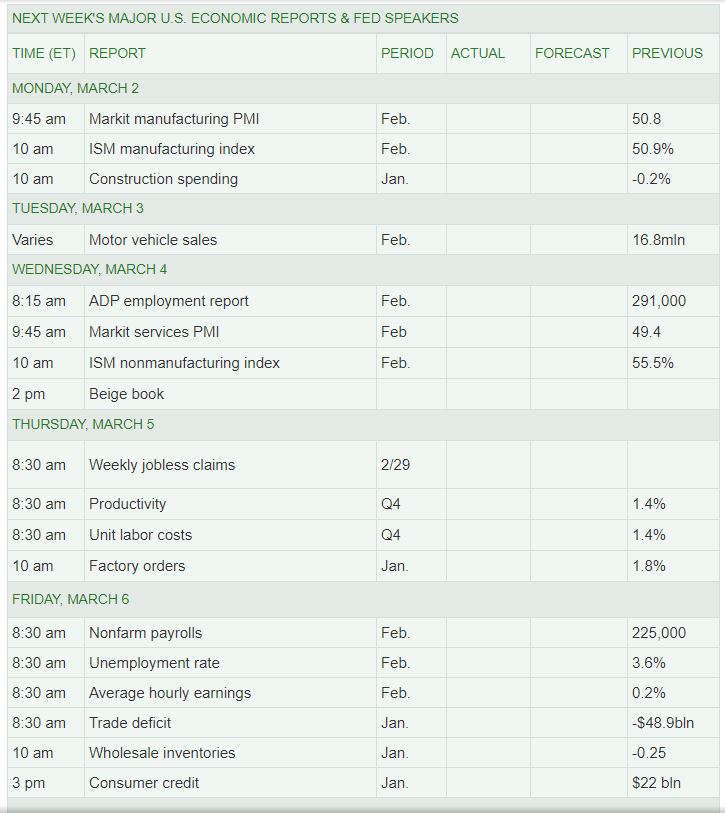