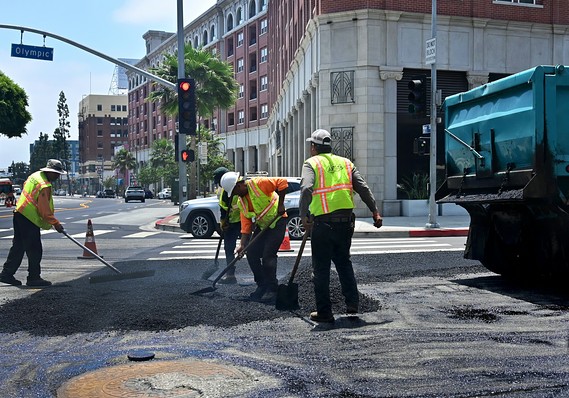 House Democrats on Wednesday unveiled a five-year, $760 billion package for rebuilding roads and improving railways, signaling a new election-year priority and urging the White House to get on board.

“This is just one part of what we will be doing when we have our legislative week for infrastructure,” Pelosi said. “We’ll also have a special focus on housing, a special focus on education, school construction — all of it very important to this,” she added at a news conference on Capitol Hill.

The plan designates $329 billion for modernizing highways and improving roadway safety, including fixing 47,000 “structurally deficient” bridges and reducing carbon pollution. It also devotes $105 billion to transit agencies, $55 billion to rail investments such as Amtrak, and $30 billion to airport improvement.

How to pay for the package remains up in the air. Though President Donald Trump and Democrats agreed to pursue a $2 trillion infrastructure deal last spring, Neal said they would not “volunteer a revenue stream” until the administration is on board with the proposal.

“We have a tremendous opportunity here to do a transformative, 21st century infrastructure package,” said DeFazio, an Oregon Democrat. “We have been living off the legacy of Dwight David Eisenhower with small tweaks for 75 years. It’s falling apart and needs to be rebuilt. And we can rebuild it in ways that are resilient for climate change.”

Rep. Jim Clyburn said there needs to be reliable and equitable internet access across the country for education and housing legislation to be successful.

“You’re not going to have an effective school system — no matter how good the buildings are — unless you connect those schools to the rest of the world,” said the South Carolina Democrat.

Neal said one Republican leader told him there could be “up to 70 votes” from the GOP for an infrastructure IGF, -0.76%  bill in the House.

“What we’re looking for is an agreement that we can then take to the public between the two sides about how best to pay for it, so there’s not one-upmanship,” Neal said.

Pelosi said the House Democrats will bring legislation to the floor “when we’re ready,” but she stressed the attainability of the plan, even during a contentious election cycle. “Infrastructure legislation in the past has not been partisan,” she said.