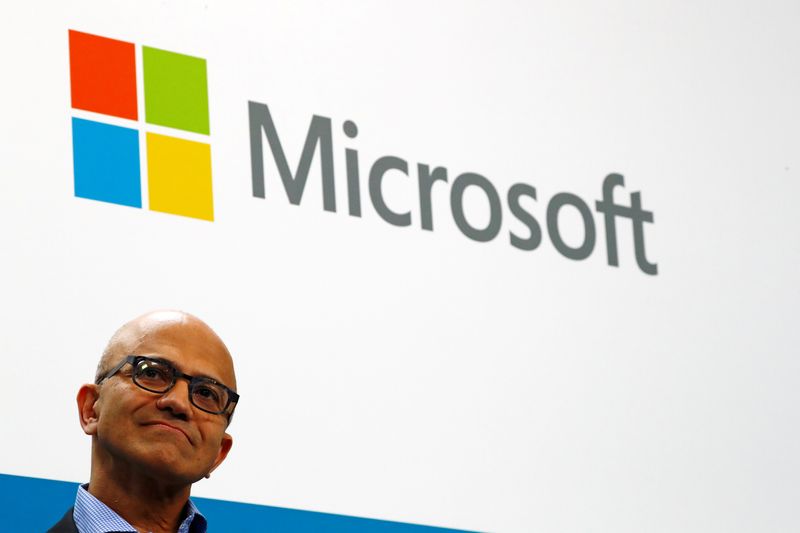 The results sent shares in the world’s largest software company to all-time highs in after-hours trading. They also reflected the approach of Chief Executive Satya Nadella, who for five years has re-centered Microsoft around the cloud, renting out its computing power and technology to large businesses.

Microsoft said Azure, its primary competitor to Amazon’s cloud, grew 62% in the quarter, down from a 76% revenue growth rate the year before but up from 59% in the fiscal first quarter.

“We did have good usage, which matters a ton to that number,” Hood told Reuters in an interview. “The core thing that we focused on – which is consumption growth – was quite good.”

Microsoft said revenue for what it calls its “commercial cloud” – a combination of Azure and the cloud-based versions of software such as Office – reached $12.5 billion, up from $9 billion the year before.

Commercial cloud gross profit margins – a key measure of cloud profitability that Microsoft has told investors it expects to improve – were 67%, versus 62% the year before.

“This quarter was an absolute ‘blow out quarter’ across the board with no blemishes and in our opinion speaks to an inflection point in deal flow as more enterprises pick Redmond for the cloud,” Wedbush analyst Dan Ives said in a note.

Patrick Moorhead of Moor Insights & Strategy said Microsoft had targeted older business sectors to transition to them to cloud services and had “stepped up its sales and marketing in key verticals like retail, manufacturing, healthcare, financial and large government which I believe had a very positive impact.”

Microsoft’s revenue and profit for the quarter ended in December were $36.9 billion and $1.51 per share, compared with analyst estimates of $35.7 billion and $1.32 per share, according to IBES data from Refinitiv.

Microsoft has focused on so-called hybrid cloud computing – in which a business can use a mix of Microsoft’s data centers and its own – as well as on delivering its longstanding productivity programs such as Office via the cloud.

The shift to the cloud has driven Microsoft’s shares up more than 50% in the past year, as it gains ground against market leader Amazon and also parries the threats to its classic software programs from newer entrants like Alphabet Inc’s (O:) Google.

In 2019, Microsoft had 22% share of the cloud computing infrastructure market, compared with 45% at Amazon and 5% from Google, according to data from Forrester Research.

Revenue in the unit that contains Windows was $13.2 billion, compared with estimates of $12.8 billion. Over the past year, Windows sales had been hampered by shortages of PC chips from Intel Corp (O:), but the chipmaker said last week it had alleviated most of those supply concerns.

“Chip supply came in better than we had anticipated going into the quarter,” Microsoft’s Hood said. “And so when that happens, because demand is still quite strong, all of that (chip supply) certainly got put to use” by PC makers.