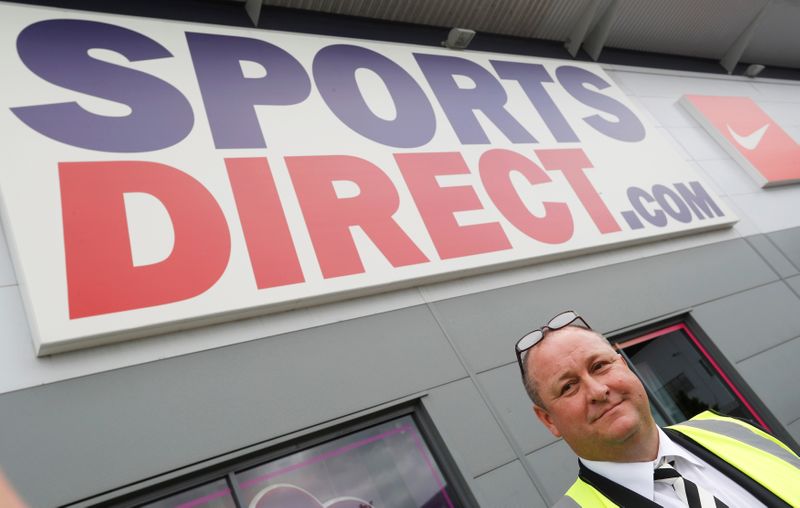 © Reuters. FILE PHOTO: Mike Ashley, founder and majority shareholder of sportwear retailer Sports Direct, leads journalists on a factory tour after the company’s AGM, at the company’s headquarters in Shirebrook

The tax issue first came to light when Frasers, which is majority owned by Mike Ashley, reported 2018-19 results in July.

Shares in the group were up 1% at 1048 GMT on Thursday, extending gains over the last year to 79% and valuing the group at 2.55 billion pounds. Ashley owns 63.3% of its equity, according to Refinitiv data.

“This update is a clear positive, removing to a large degree a significant uncertainty that has been in place since the prelims,” said analysts at Liberum.

Frasers said the Belgian Tax Authority confirmed in writing it had completed its review of “Matter 1” – which accounts for 73% of the possible claim – and was satisfied with the explanation provided.

The group, which made core earnings of 288 million pounds in 2018-19, said it is not required to make any payment to the authority regarding this part of the review.

“Our view at the time (July) was that this VAT bill was without merit so I am delighted we have so far been vindicated in that view with the extinguishment of the main part of the proces-verbal”, said Frasers’ finance chief Chris Wootton.

The group said it had however made some historical clerical reporting errors and would continue to fully engage with the tax authority in order to resolve “the smaller remaining matters”.

“Frasers Group management still believe that it is less than probable that material VAT and penalties will be due in Belgium as a result of the tax audit,” it added.

Last month the group forecast core earnings growth of as much as 15% in 2019-20, helped by a nascent turnaround at department store chain House of Fraser, which it bought out of administration in 2018.