Home
Stocks
More new cases of coronavirus confirmed outside of China for the first time: WHO
Prev Article Next Article
This post was originally published on this site

There were more new confirmed cases of the coronavirus reported outside of China for the first time, the head of the World Health Organization said late Wednesday.

“Yesterday, the number of new cases reported outside China exceeded the number of new cases in China for the first time,” Tedros Adhanom Ghebreyesus, director general of the WHO, according to a transcript of a speech to diplomats in Geneva. But he called for people to refrain from using the word “pandemic.” An “epidemic” is when a disease spreads through one or several communities; a pandemic occurs when a disease spreads throughout the world.

WHO said there were 411 new confirmed cases of COVID-19 in China as of Tuesday and 427 in other countries. The sudden increases of cases in Italy, the Islamic Republic of Iran and the Republic of Korea are deeply concerning,” he said, according to a prepared statement of his speech. “There are now cases linked to Iran in Bahrain, Iraq, Kuwait and Oman,” Ghebreyesus added. “There are now cases linked to Italy in Algeria, Austria, Croatia, Germany, Spain and Switzerland.”

“The increase in cases outside China has prompted some media and politicians to push for a pandemic to be declared,” he said. “We should not be too eager to declare a pandemic without a careful and clear-minded analysis of the facts.” Ghebreyesus added, “Using the word pandemic carelessly has no tangible benefit, but it does have significant risk in terms of amplifying unnecessary and unjustified fear and stigma, and paralyzing systems.”

Also see: Coronavirus fatality rates vary wildly depending on age, gender and medical history — some patients fare much worse than others

There were 81,191 confirmed cases of COVID-19 and at least 2,768 deaths as of Wednesday, according to a tally published by the Johns Hopkins Whiting School of Engineering’s Centers for Systems Science and Engineering. On Thursday, China’s National Health Commission said there were 433 new confirmed cases of coronavirus and 29 more deaths as of Wednesday, bringing the total number of cases in that country to 78,497, and the total number of deaths there to 2,744.

Also Thursday, South Korea reported 334 new cases, bringing that country’s total number of cases to 1,595; Denmark and Estonia also confirmed their first cases of the novel coronavirus. Meanwhile, Brazil confirmed its first case of coronavirus late Wednesday. There are more than 440 cases in Northern Italy. A man in California tested positive, bringing the total number of confirmed cases in the U.S. to 60, the Centers of Disease Prevention and Control said on Wednesday evening.

The outbreak has spread rapidly in recent weeks. Clusters in Iran and Italy, and its spread to over 40 countries have rattled markets. It’s believed to have originated at a food market in Wuhan. People may not know they’re carrying the virus. Symptoms of common human coronaviruses include a runny nose, headache, cough, sore throat, fever and a general feeling of being unwell, according to the CDC. Symptoms of the new coronavirus can include fever, cough and shortness of breath. 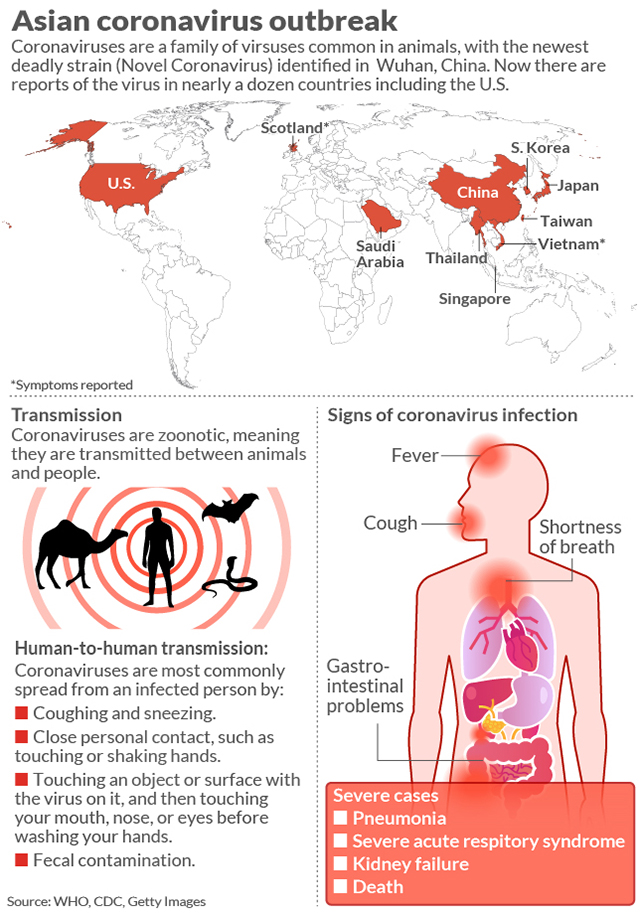