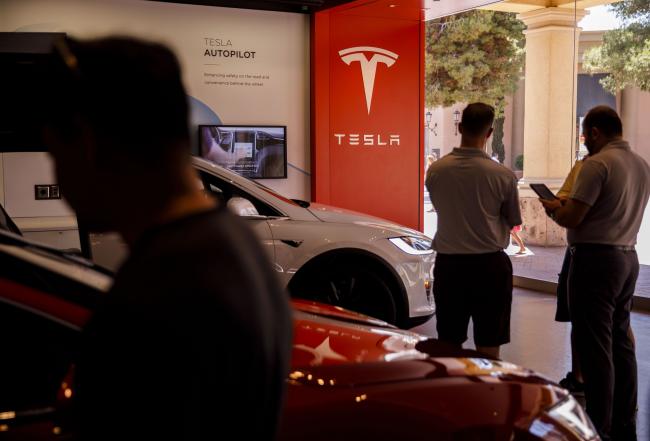 (Bloomberg) — Tesla (NASDAQ:) Inc. has always had one foot in the automotive world and the other in technology. But when it comes to the company’s valuation, neither truly fits.

The stock’s stunning ascent — doubling in just the first 23 sessions of the year on record vehicle deliveries, the opening of a China plant and an earlier-than-expected profit at a jointly operated battery factory — has cooled off as exuberance gives way to caution. But the still-meteoric advance of the last five weeks has prompted more comparisons with high-growth technology names, and even has tech-focused market watchers looking more closely at the stock’s fundamentals.

“With Tesla’s extraordinary rise from $180 last year to nearly $1,000 this past Tuesday, we are receiving an increasing volume of calls from tech PMs and analysts who have begun to pick up coverage of Tesla from the traditional industrials/autos cohort,” Morgan Stanley (NYSE:) analyst Adam Jonas wrote in a report, referring to portfolio managers.

The stock was volatile again Thursday, reversing early declines after two Democrats in the U.S. House of Representatives introduced legislation to create a nationwide network of electric-vehicle charging stations. The measure is unlikely to pass in an election year with Republicans controlling the Senate.

Tesla’s valuation, which hovered around $132 billion after Wednesday’s plunge, reflects a price-to-sales multiple around 5, compared with 0.4 for General Motors Co (NYSE:). and 0.2 for Ford Motor (NYSE:) Co. Toyota Motor Corp. and Volkswagen (DE:) AG also trade at a multiple of less than 1. Tesla bulls, however, say it’s unfair to compare it with legacy automakers, pointing instead to technology companies as its true peers.

“It appears Tesla, in the market’s view, has gone far past the point of comparison vs traditional auto companies,” Jonas said. While Tesla’s valuation is an order of magnitude higher than autos peers, he said, “we think this is largely deserved — Tesla is a significantly faster-growing auto company, and it is also more than an auto company.”

Tesla can’t yet be measured on a comparable price-to-earnings basis since it hasn’t had four straight profitable quarters on a GAAP basis. It was in the black in the past two periods on an adjusted basis.

“Tesla could be at $900, but it would need revenues like Volkswagen, margins like Apple (NASDAQ:), and reinvest like no other manufacturing company in history has ever done,” said Aswath Damodaran, a professor at New York University’s Stern School of Business who specializes in valuation. It’s possible Tesla succeeds in doing one of those things, but “connect them together and that’s when the story implodes. This is a Grimm fairy tale with manic swings.”

“Tesla is trading at well over two times the enterprise value of Daimler, and three times of BMW,” Roth Capital analyst Craig Irwin, said in an interview. “That doesn’t seem to make so much sense to me.”

The debate comes down to whether Tesla has a years- or some day even a decade-long lead over other automakers in the electric-car race. It “seems the market has decided it’s a much longer lead than a one or two years,” Irwin said.

“Not to sound like an ‘OK, boomer’ to the younger investors rushing into Tesla shares, but the recent price action brings to mind Nasdaq circa 1999,” Barclays (LON:) auto analyst Brian Johnson said. The recent price surge opened up the possibility of raising capital cheaply, reducing any chance of a stalled business, yet Tesla remains fundamentally overvalued, he said.

Tesla’s volatile swings over the past few days called to mind a similar performance from Qualcomm (NASDAQ:) Inc. almost exactly 20 years ago, when the stock soared 360% over five months. After touching a high of $100 in early January 2000, the stock started paring the gains. Only now, roughly two decades later, has it re-approached those levels. Qualcomm traded around $88 Thursday after issuing a disappointing forecast for second-quarter chip shipments.

“The whole thing seems preposterous, it is the craziest thing since 1999,” said Williams (NYSE:) Trading’s Brad Meikle, who is one of the most bearish Tesla analysts on Wall Street. “It is absolutely a bubble.”