Home
Stocks
Need to Know: Amazon and other stay-at-home stocks are starting to stall. They may hold the key to the market, strategist says.
Prev Article Next Article
This post was originally published on this site 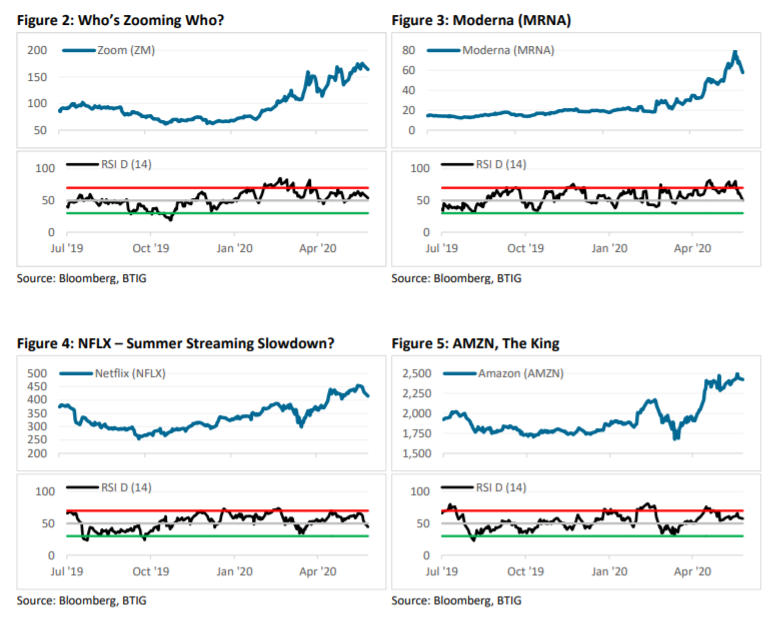 But some of the big coronavirus plays are losing momentum. Software company Zoom Communications ZM, -4.12%, drugmaker Moderna MRNA, -16.36%, and home entertainment providers Netflix NFLX, -3.38% and Amazon AMZN, -0.61% all have, if not declined, at least stopped rising, notes Julian Emanuel, chief equity and derivatives strategist at BTIG.

He says that is cause for concern.

“We’d suggest that the ability for the broad market to build on its recent gains is contingent on names like Zoom, Moderna, Netflix and Amazon and other highflying ‘shelter-in-place’ names whose momentum has waned in recent days, to at least sustain their meteoric advances as leadership passes off to the more cyclical areas and themes,” Emanuel said.

Don’t blink, though — London-based strategists at J.P. Morgan Cazenove say the rotation into value and cyclical stocks won’t last longer than four to six weeks. “Bond yields and oil price are unlikely to sustainably move higher, therefore they will not confirm the rotation, and some of the pent-up demand driving a normalization in [purchasing manager indexes] is likely to be exhausted soon, especially as the lingering negative impact of labor market dislocation starts to bite,” say the strategists led by Mislav Matejka.

The European Union is due to release its proposal for a rescue fund, amid competing ideas from a Franco-German proposal and the so-called Frugal Four (Austria, Sweden, Denmark and the Netherlands). Bloomberg News reported the EU proposal would consist of €500 billion in grants and €250 billion of loans.

The U.S. is considering a range of sanctions to punish China for its crackdown on Hong Kong, Bloomberg News reported, citing people familiar with the matter.

European Central Bank President Christine Lagarde said the eurozone economy is likely to contract along the lines previously outlined in the bank’s medium-to-severe scenarios, ruling out the “mild” possibility. The severe outlook is for a 12% gross domestic product decline and the medium scenario is for a 8% drop, while the mild was for a 5% drop.

Amazon.com is in talks to buy autonomous driving technology company Zoox for less than the $3.2 billion valuation the firm achieved in its last funding round, according to The Wall Street Journal.

Senate Majority Leader Mitch McConnell said on Tuesday that there would “likely” be a fifth coronavirus relief bill “in the next month or so,” according to The Hill.

The Federal Reserve’s Beige Book of economic anecdotes is due at 2 p.m. Eastern.

Lyn Alden of Lyn Alden Investment Strategy has put together this chart — updating one of hedge-fund titan Ray Dalio’s — showing how the monetary base surges at the end of debt supercycles. She says that in the 1930s, private debt as a percentage of GDP peaked without much inflation, and in the 1940s, federal debt-to-GDP peaked and there was a rise in inflation. That could repeat this time around, she says, with inflation having stayed muted during the recovery from the housing bubble and accelerating as federal debt skyrockets.

Car-rental company Hertz paid out millions in bonuses (to executives) before going bankrupt.

Comedian Kathy Griffin still, it appears, does not like President Donald Trump.

Chimpanzees smack their lips together the way humans talk.