Home
Stocks
Need to Know: Even a portfolio of 40% bonds won’t escape further coronavirus losses, MSCI says
Prev Article Next Article
This post was originally published on this site

MSCI, the index and portfolio analysis firm, has done its own scenario analysis, modeling what it called a “severe but plausible short-term downside scenario.” 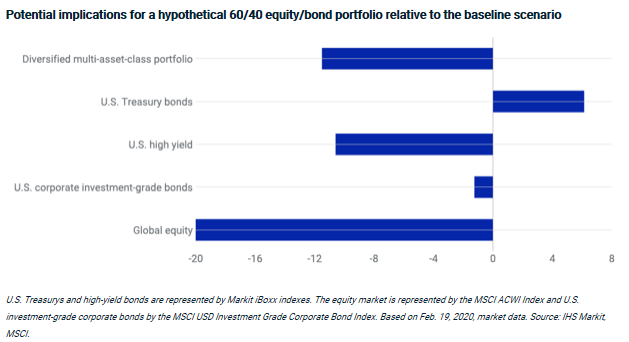 MSCI assumed not just a 2-percentage point decline in global economic activity but also a higher risk premium, since investors may turn more risk-averse in response to the increased uncertainty.

Dhaval Joshi, chief European investment strategist at BCA Research, argues financial markets will have fully priced in a downturn when the time horizon of investors that have fully capitulated equals the length of the downturn. 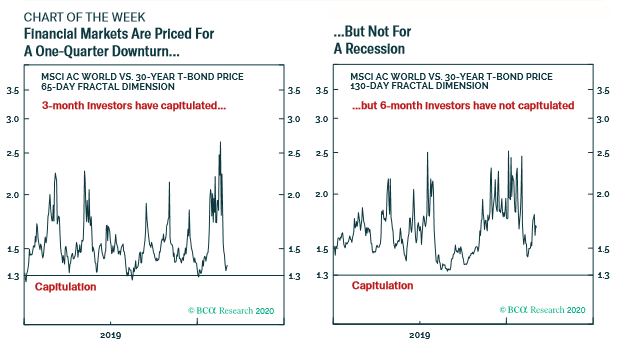 He says financial markets on Friday reached the point where they were fully priced for an economic downturn of one quarter but not two.

“The message right today is to go tactically long equities versus bonds if you have high conviction that the coronavirus induced downturn will last no longer than one quarter,” he says.

There are now 95,738 confirmed coronavirus cases globally, including more than 15,000 outside of China, according to the Johns Hopkins tracker. California declared an emergency, and a Princess Cruises ship is held up off its coast.

The International Air Transport Association said the passenger airline industry could see a revenue shortfall of up to $113 billion. The trade group said the 25% decline in airline share prices is 21 percentage points worse than the decline at a similar point of the severe acute respiratory syndrome crisis of 2003.

U.S. economic data reports have been largely fine since the virus outbreak. Data set for release on Thursday include weekly jobless claims as well as January factory orders ahead of Friday’s key nonfarm payrolls report.

St. Louis Federal Reserve President James Bullard told Bloomberg that the Fed isn’t likely to cut interest rates further at its scheduled meeting this month because “it’s unlikely we are going to have that much different of information when we get to the March meeting.”

U.S. stock futures were in retreat mode on Thursday with futures on the Dow Jones Industrial Average YM00, -1.81% down over 400 points. European SXXP, -1.55% stocks also were weaker, and Asian stocks closed lower.

Hyundai developed a concept car controlled by a joystick instead of a steering wheel.

Glowworm numbers have plunged by three-quarters since 2001.

Not that there is a connection to the previous story, but a “full worm moon” is coming.