Home
Stocks
Need to Know: Here’s why the next 10% stock move is likely to be down, warns Miller Tabak’s top strategist
Prev Article Next Article
This post was originally published on this site

Thank China (again) for what looks like another bullish day on Wall Street after Beijing pledged to halve tariffs on $75 billion in U.S. imports, while political uncertainty has eased after the Senate acquitted U.S. President Donald Trump. That is as investors have decided the deadly coronavirus isn’t a reason to sit on the sidelines of markets.

But all that appetite for investing in equities, which tends to invite more risks than other asset classes, is worrying a few. “The odds that the next 10% move is to the downside versus the upside, I think, are much higher,” Miller Tabak + Co.’s lead strategist Matt Maley told MarketWatch in our call of the day.

Maley said the market has been “priced for perfection” for a while, making it harder to rally much higher from here.

I don’t know about the rest of you, but I keep seeing more reasons to be much smaller, not bigger, in the current market environment. There is a time to make money and a time to keep money. I think now is the latter

And because most individual investors had a pretty stellar 2019, they don’t need to go chasing the stock market or the movements of bigger investors right now, he said.

“At the beginning of the year, if the market is rallying, [institutional investors] have to be in… they can’t fall behind their bogeys early in the year, because they spend the rest of the year playing catch-up and it’s too hard to do,” Maley explained, adding that those big players must buy stocks in a rising market regardless of their longer-term goals.

And regular investors shouldn’t invest on the theory the market will take off like it did in 2019. “Too many people talk about the extremes too often. ‘Oh my gosh, I’m going to miss another 30% rally like we got last year.’ Or ‘The stock market’s going to crash,’” he said.

Most years, the stock market ends up somewhere in between and “right now with the market as extended as it is, I just don’t think chasing it is a great idea,” said Maley.

The last word goes to Citigroup’s chief U.S. equity strategist, Tobias Levkovich, who reportedly wrote that nearly “every client we talk to wants to buy the dip, and that is not comforting.” While the coronavirus’s spread outside of Hubei has slowed, “we are reticent to think that impact is behind us now,” he said. 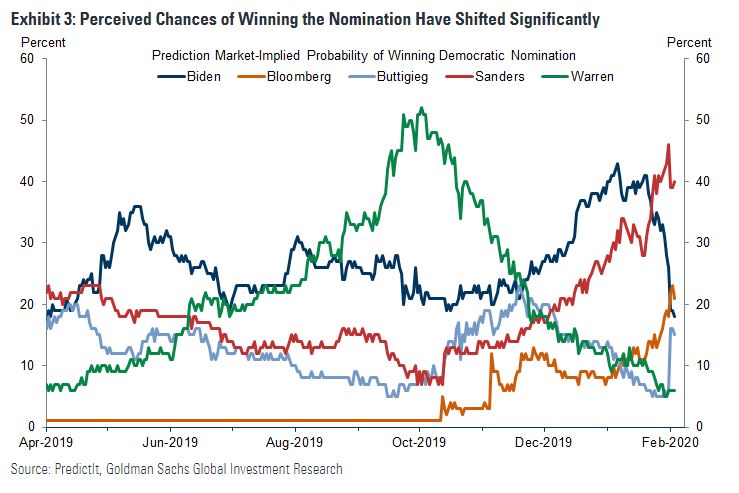 Tesla shares are down another 4% in premarket trading after the electric-car maker tumbled 17% on Wednesday TSLA, -17.18%.

The World Health Organization wants $675 million to battle the coronavirus, amid the biggest jump in cases in the last 24 hours since the outbreak began. China’s confirmed cases surged to 28,018 and at least 563 deaths, while more quarantined passengers got sick on cruise ships.

This badger and coyote friendship is everything right now.

Others are also being remembered:

Yesterday we bid a final farewell to our dear Terry J… Not the Messiah, just a very naughty boy. pic.twitter.com/Yw1m3OwNcm