Home
Stocks
Need to Know: High volatility is here to stay for 2020. Goldman names 31 stocks to deliver the best risk-adjusted returns amid the turbulence
Prev Article Next Article
This post was originally published on this site

The grim milestones of 10 million global coronavirus cases and more than 500,000 deaths, along with spikes in a number of U.S. states, haven’t deterred investors on Monday. U.S. stock futures pointed higher before the open, despite more indications a second wave may be around the corner.

Of the 10 million cases worldwide, more than 2.5 million have come from the U.S., according to data by Johns Hopkins University. The U.S. also hit a daily record for new cases on Friday, reporting 44,000 new infections, and lockdown measures have been reinstated in Texas and Florida.

In our call of the day, Goldman Sachs strategists said high volatility and low risk-adjusted returns were likely to linger in the coming months. After last week’s 2.9% dip, they expected the S&P 500 SPX, -2.42% to end the year at 3,000 points — 0.3% lower than its closing price on Friday.

“Consensus expects 9% upside to the typical stock over the next 12 months and volatility should remain elevated through the rest of the year, suggesting low risk-adjusted returns in the coming months.”

The investment bank’s portfolio strategy research team added 31 stocks to its high Sharpe ratio basket, which now tilts toward health-care providers, media, information technology services, and aerospace & defense industries. The Sharpe ratio measures the risk-adjusted return of an investment, with a higher ratio having a more attractive return once risk is factored in.

Goldman’s high Sharpe ratio basket has underperformed the S&P 500 year-to-date by 591 basis points, which the team put down to its tilt toward value stocks. Historically, the basket has outperformed the S&P 500 in 66% of semiannual periods since 1999 by an average of 271 basis points. The basket outperformed the index in May and early June, as economic data improved and value stocks rallied, they said, but has lagged behind since as fears of a second wave have mounted.

This chart from Fundstrat Global Advisors shows that, despite the rising U.S. infection rates and spikes in states, such as Texas, Arizona, Florida and California, the daily deaths in America from COVID-19 have fallen to their lowest since March. 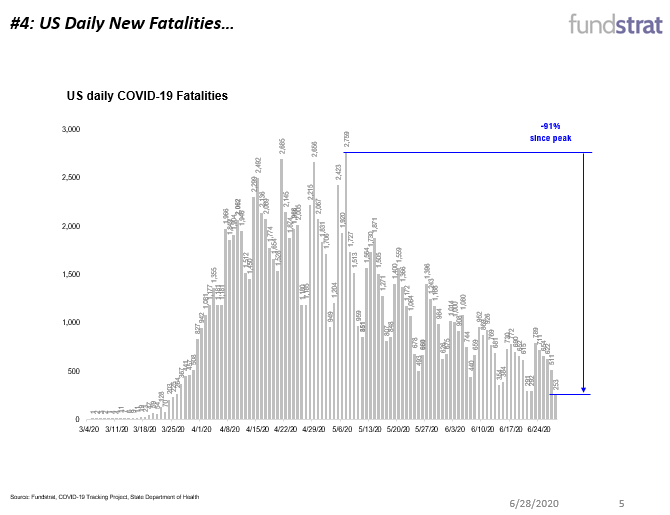 Facebook Chief Executive Mark Zuckerberg reportedly wanted to remove an incendiary post by then-candidate Donald Trump as far back as 2015, The Washington Post reported on Sunday. Instead, he was convinced to change the platform’s rules to allow such posts in the name of political disclosure.

The U.S. is “unlikely” to develop herd immunity to COVID-19 due to a likely partially effective vaccine and a large number of people refusing to take it, said Dr. Anthony Fauci, director of the National Institute of Allergy and Infectious Diseases, on Sunday.

Airbnb co-founder and Chief Executive Brian Chesky warned travel will “never, ever go back to the way it was pre-COVID” in an interview with Axios.

Britain’s top civil servant and one of the most powerful people in the government, Sir Mark Sedwill, announced plans to step down on Sunday, as Prime Minister Boris Johnson looks set for a shake-up.

Son sails solo across the Atlantic to reach his 90-year-old father.