Home
Stocks
Need to Know: Stocks haven’t bottomed yet, so wait for this signal, advises Charles Schwab strategist
Prev Article Next Article
This post was originally published on this site

Can Wall Street stocks add to the best gains in a year even as coronavirus cases and deaths continue to rise outside China?

Stock futures are saying yes, for now, as investors pin their hopes on a Group of Seven finance ministers and central banks emergency teleconference call later on Tuesday. That’s as Australia announced its own coronavirus-fighting interest rate cut overnight, which prompted U.S. President Donald Trump to again call for one from the Federal Reserve.

Caution abounds though, as investors push further into uncharted coronavirus territory. JPMorgan strategist Mislav Matejka told clients on Monday to expect an “immediate relief bounce,” for stocks. But he also warned they’d “remain under pressure for longer,” and markets would “struggle to rally sustainably” amid the outbreak.

That brings us to our call of the day from the Schwab Center for Financial Research’s vice president of trading and derivatives, Randy Frederick, who has this message for investors: “Don’t panic and don’t sell on the lows.”

Frederick advises against trying to bargain hunt among beaten-down stocks right now, and offers up one guideline that he says has worked well over market history. “My general rule of thumb, which has been pretty consistent, is if you’re going to start buying on a dip, you need to wait until you get two good solid up days,” he told MarketWatch.

It is tough for investors to find the exact bottom for stocks, he says. “Imagine if we had two really strong up days right now, we would still be significantly lower than where we started before this thing went down. At least then you’re jumping in when the momentum, has shifted.”

Frederick believes markets may be able to find a floor once coronavirus headlines start to slow down, and not just the politicians, but those in the U.S. professional medical community “tell us we can stop panicking.”

“I don’t think we’ve seen that just yet. People need to be a little bit cautious and wait. We don’t know where the bottom’s going to be, but it doesn’t feel as though it’s here just yet. It’s too risky to be doing any bargain hunting and buying at the moment, but that also means don’t panic and sell out of your 401(k)” and retirement portfolios.

“Just simply wait and see how this plays out.”

What concerns me the most is less than 50% of $SPX names remain above their 200-day moving averages. Interesting that $XLK including $AAPL remained above, but the more telling stat is most broke down. This usually means deeper correction in time and/or price. pic.twitter.com/NliQFjHUVR

Goldman’s chart says we may have reached peak internet-search interest for the coronavirus. 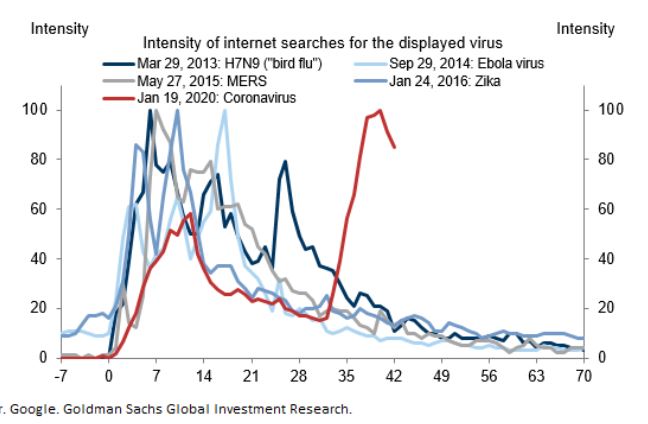 The World Health Organization’s director-general says we are in “uncharted territory,” as coronavirus deaths rise outside China, but fall in that country.

On the corporate front, Hyatt Hotels H, +0.57%  yanked its guidance, while micro-messaging service Twitter TWTR, +7.89%  has asked all employees to start working from home.

As locked-down Wuhan residents struggle to get food, American coronavirus hoarding may be kicking off. Amazon AMZN, +3.73% is reportedly warning of delays for its food delivery services as customers rush to stock up — bottled water demand has apparently been huge. And toilet paper is running low for big-box retailers like Costco COST, +9.96%, which reports earnings on Thursday.

Let me tell ya how my “weekly positive” pregnancy test turned out.

Auto sales are on tap for Tuesday.

Nashville has been hit by a pair of tornadoes

UPS worker arrested by California police had 20,000 rounds of ammunition