Home
Stocks
Need to Know: This clear signal says the big tech unwind isn’t done yet, according to strategist
Prev Article Next Article
This post was originally published on this site

Get that Dow DJIA, +0.97% 32,000 beanie hat ready for Tuesday, as pressure in the bond market continues to ease and celebrating over a $1.9 trillion stimulus package carries on a bit. Futures are also pointing to a sharp rebound for technology stocks after the Nasdaq Composite fell into correction territory on Monday.

One valid question to ask right now is, how much more of a pullback for techs will we see? “Our work on positioning suggests that the big tech unwind may be at least halfway done, but isn’t finished,” said Lori Calvasina, RBC Capital’s head of U.S. equity strategy, in our call of the day.

Calvasina based this on a tracking of weekly Nasdaq futures contracts, provided by the U.S. Commodity Futures Trading Commission. The data are used by some on Wall Street as a measure of sentiment of how hedge funds and institutional investors are positioning in the U.S. equity markets.

“This indicator…returned to 2013-2014 peaks on a dollar value basis [left image] earlier this year, and to levels that have marked the peak several times since then in terms of the number of contracts owned [right image],” she said. “While U.S. equity futures positioning generally has been highlighting risk of a pullback in stocks in recent months, that signal has been the most clear in Nasdaq positioning.” 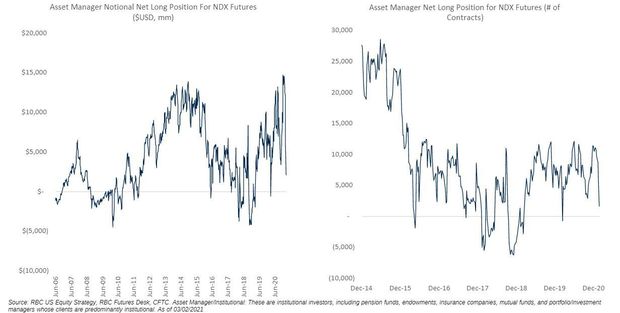 As of the last update (last Tuesday’s close), the decline in Nasdaq futures positioning was roughly halfway back to the lows of 2018 in terms of dollar value and contracts, she said.

Calvasina also suggested investors keep an eye on valuations for the tech + internet + media + telecom (TIMT) space, based on where those levels were in the bubble of 2000.

“Our work here also suggests that big tech underperformance hasn’t run its course,” she said, even with sharp falls seen early this year, the weighted median forward price/earnings measure of TIMT sits at 26.2 times, well above a long-term average of 18.3 times. It is also elevated on a forward price/earnings relative to the S&P 500. 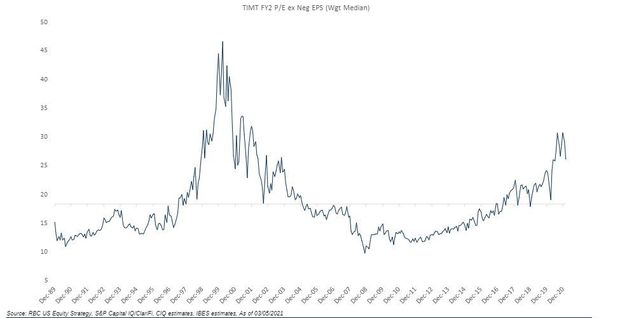 As for what investors should do now, Calvasina has been telling clients that small-caps look cheap versus large-caps, and financials, energy and material don’t look expensive yet.

She is also eyeing the midcap space for a few reasons. Firstly, the Russell Midcap RMCC, -0.03% and S&P 400 MidCap MID, -2.48% benchmark indexes are more exposed to cyclical sectors than TIMT, futures positioning on those smaller stocks isn’t looking stretched (see chart below) and valuations look attractive versus large-caps, and reasonable versus smaller companies, she argues. 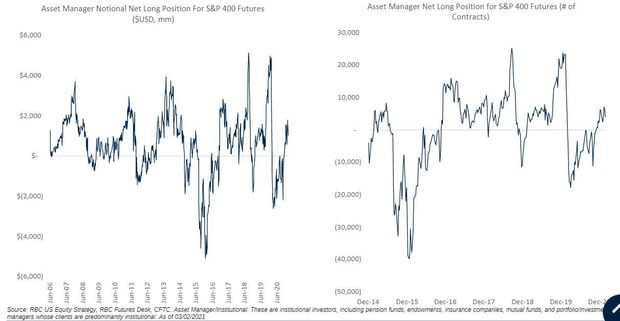 “We’ve been advising managers to move down market cap, given the tendency of low market cap to outperform within the Russell 1000 RUI, -0.60% coming out of recessions and over time,” said Calvasina.

“I’m happy that the market is broadening out.” That was Cathie Wood, founder of the popular ARK Investment Management and exchange-traded funds like ARK Innovation ARKK, -5.82%, speaking in a Bloomberg interview late on Monday. She says she’s finding opportunities in the recent tech selloff.

One stock that several ARK ETFs are exposed to is electric-car maker Tesla TSLA, -5.84%. The tech selloff has erased more than a quarter of a trillion dollars off the electric-car maker’s market cap in just over a month. But shares are up about 5% in premarket.

Small businesses are less anxious, but wrestling with an uneven recovery, the latest data compiled by the National Federation of Independent Business showed.

The COVID-19 vaccine from drug company Pfizer PFE, -0.12% and its partner BioNTech BNTX, -6.14% neutralized a fast-spreading Brazilian variant of coronavirus, according to a new study. And Russia’s Sputnik V vaccine will soon be produced in Europe.

Shares of videogames retailer GameStop GME, +41.21%, the poster child of the retail frenzy from earlier this year, are surging in premarket after the company said it has created a new strategy committee to identify ways to accelerate its transformation. The Senate Banking Committee will hold a hearing on the GameStop saga on Tuesday.

Older than the earth: A piece of a meteorite that landed in Algeria.

Need to Know starts early and is updated until the opening bell, but sign up here to get it delivered once to your email box. The emailed version will be sent out at about 7:30 a.m. Eastern.

Want more for the day ahead? Sign up for The Barron’s Daily, a morning briefing for investors, including exclusive commentary from Barron’s and MarketWatch writers.