Home
Stocks
Need to Know: Wait for these signals to buy coronavirus-battered stocks, says BNY Mellon strategist
Prev Article Next Article
This post was originally published on this site

President Donald Trump’s coronavirus press conference has not stemmed the global equity slide as world-wide infections climb. Meanwhile, one patient in California is of particular concern because officials don’t know where he got infected.

Some believe the next big fall in equities will come when we see a cluster of U.S. cases, which may partly explain why that popular past time of buying stocks on any dip seems less popular lately.

Citigroup strategists are advising against buying equities right now, on the view that if a Federal Reserve lifeline is coming, it may not happen right away.

Our call of the day comes from BNY Mellon’s chief strategist Alicia Levine, who has advice for those wanting to know when to buy beaten-down (and down) stocks. She said they first need a solid view on where this virus is headed.

“If you think it is essentially a short-term problem, a hit to growth, but then it is over by the summer, then you’re fine going into the market. But if you think it is worse than that, then you have to play that out,” she told MarketWatch.

“We do think by the summer, this will be a memory and that growth will recover,” she said, though she admitted risks to their baseline view are pretty real. She is watching out for signs of a dramatic daily drop in China infections, and pickups in usage of coal, electricity and road and rail in that country, alongside property sales. As well, she wants to see signs that the mortality rate is lower, which will mean fewer quarantines and containment shutting down activity.

For average investors, it is OK to wait for more information, but also “take some risk off the table if you’re sitting on gains,” and don’t go overboard on buying perceived safe-haven assets, Levine said.

Here’s our chart from Goldman Sachs strategist David Kostin and his team, who predict the S&P 500 could drop to 2,900 from here if investors start to believe the coronavirus outbreak is spreading, but rebound to 3,400 by year-end. They suggest buying defensive stocks, such as real estate and utilities. 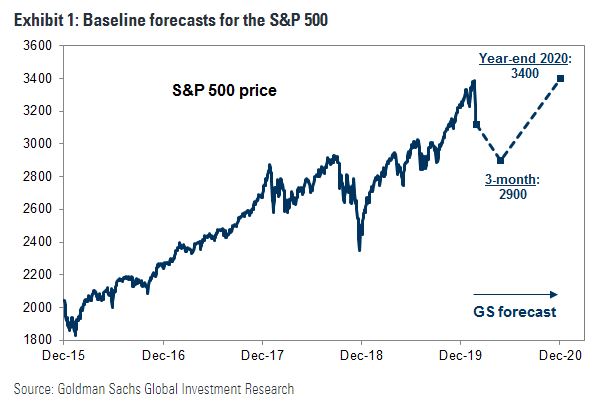 Here’s their earnings chart, and Kostin adds that if the coronavirus epidemic drives the U.S. into recession, S&P 500 earnings per share would fall 13% this year: 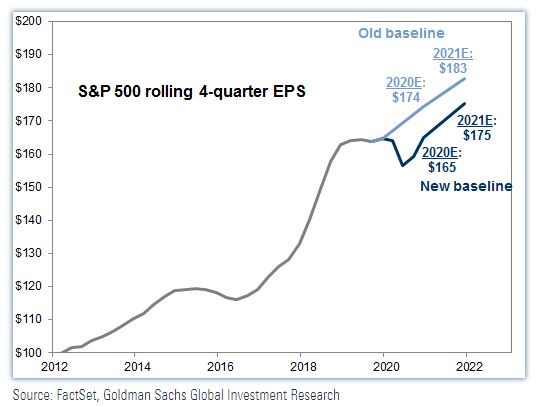 Shares of Microsoft MSFT, +1.25%  are down after it warned of not meeting recent guidance for its personal computer business due to the coronavirus. Expect PC and hardware makers to follow, say some. And beer giant AB-InBev BUD, -0.94%  says the virus has cost it $170 million in profit so far this year.

Some fear an infected Northern California man could mark the first sign of the virus’s spread in a U.S. community. Global cases are now rising faster than those in China and the World Health Organization is worried. Germany warns it is at the “beginning of an epidemic” and Australia’s prime minister says we’re almost certainly in a pandemic.

What started as a joke — Corona beers are being shunned

Army of Chinese ducks deployed to fight locusts in Pakistan