Home
Stocks
Need to Know: Why a JPMorgan strategist says markets are about to get calmer if not better
Prev Article Next Article
This post was originally published on this site

One sign of just how intense the market turmoil has been is when decadeslong views get thrown out the window.

Albert Edwards, the strategist at Société Générale who has been right about bonds and wrong about stocks for the duration of the just-ended bull market, sees a coming thawing of what he has long dubbed the Ice Age, his label for a Japanese-style deflationary bout. The thawing, he says, is being brought about by central bank financing of fiscal spending. The recent spike in bond yields had him contemplating that a top in bonds has been reached, though that is not his expectation.

“I would be highly surprised when the market has sight of depression-like economic data over coming months and experiences the ongoing equity markets rout, if government bond yields did not make new lows, with the U.S. 10-year converging with bund yields deep into negative territory,” says Edwards.

The intensity of the moves in markets, though, haven’t simply reflected a pricing in of a recession brought about by a lockdown of the global economy. Market depth has disappeared and volatility has surged, leading to computer traders pulling their liquidity, which creates even more violent markets.

“Many aspects of this crisis have played out in-line with our prediction: severe liquidity disruptions, forced deleveraging of systematic strategies, record speed of equity declines, and failure of bonds to offset equity losses,” says Marko Kolanovic, quantitative strategist at JPMorgan.

The expiration of key options contracts on Friday may make for some less-turbulent markets ahead, he says. The month-end rebalancing of portfolios also will be a help.

“The stark underperformance of equities vs. bonds [month to date] leaves fixed-weight asset allocation portfolios about 4% underweight equities, which suggests they are likely to do a large rotation out of bonds and into equities to rebalance back to target weights,” he says.

“Our model suggests these flows could drive about 4% outperformance for equities during the last week of this month (all else equal), but given the record low liquidity and compounding effect of short gamma, the impact could be up to 4x times larger.”

There were no new domestic cases in China for the second day in row, as Italy’s death toll of 3,405 now tops the world. Italy has the world’s second-oldest population.

The Bank of England canceled stress tests on its banks.

Oil futures CL.1, +6.58% jumped 8%, a day after The Wall Street Journal reported the U.S. may intervene in the Saudi-Russia standoff over production. 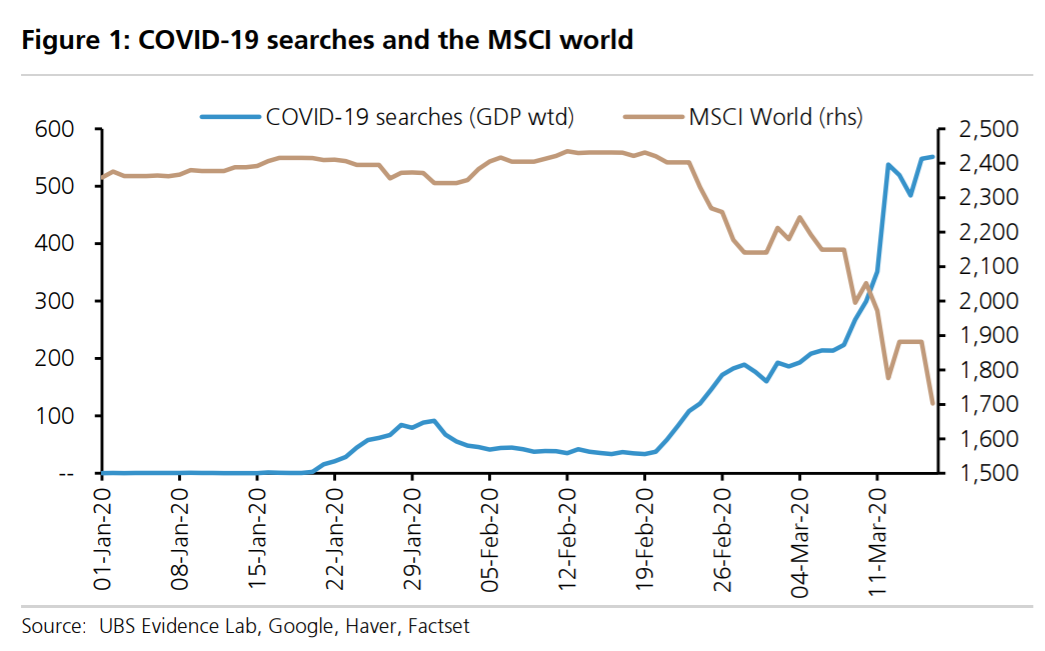 UBS finds that daily searches for coronavirus have led reported cases in many areas impacted by coronavirus, which could be because it is an indication of when people begin feeling symptoms. And there seems to be a correlation between searches and stock moves. “In addition to watching new coronavirus cases, in the short term we think searches could potentially be a leading or coincident indicator for equities as the virus progresses amid a global response and social distancing,” said the UBS strategy note.

Livestreams to nature when you’re stuck at home.

Yale is offering a free course in how to be happier.