Home
Stocks
Need to Know: Why one quantitative analyst says stocks may have seen their ‘darkest day’
Prev Article Next Article
This post was originally published on this site

What traders could use are a few good epidemiologists on hand.

Seeing none in the financial sphere, however, traders are left staring at headlines over the latest coronavirus news and trying to compare current events to how the market reacted to past health scares.

Masanari Takada, macro and quantitative analyst at Japanese brokerage giant Nomura, in the call of the day says there is good news ahead.

First, the bad: “Discretionary investors had been picturing a V-shaped recovery in the global economy and corporate earnings, but, confronted with the surge in COVID-19 infections, many are now being forced to drastically change their strategies. While the selling could be an overreaction, the situation is suggestive of global macro hedge funds and long/short funds turning to trades that prepare for a global recession,” says Takada.

The selling that has wiped out over 6% in the S&P 500 SPX, -3.03%  in two days has sent its measure of U.S. equity sentiment two standard deviations below its rolling average. 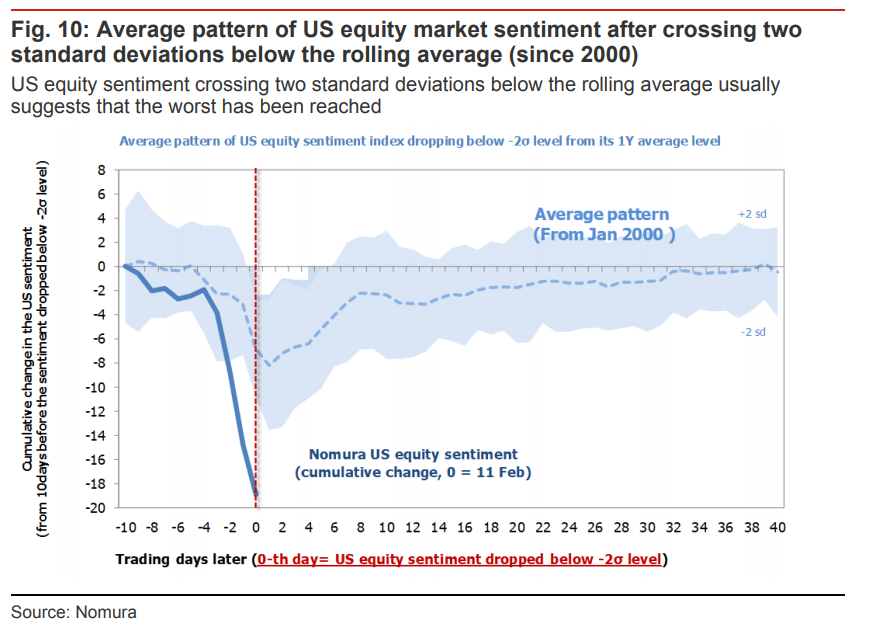 Historically, a fall of that size is good for stocks. “If the market gets the sense that the global economic downturn scenario is excessive and sentiment follows past patterns, the current situation could in hindsight be seen as the darkest day,” Takada said.

That doesn’t mean the returns will come tomorrow but, on average, over one to three months.

If you’re a believer that it is the bond market driving the stock market and not vice versa, however, BCA Research has a worrying chart. Even as the yield on the 10-year Treasury broke below its all-time low, its technical indicator is only just entering overbought territory. 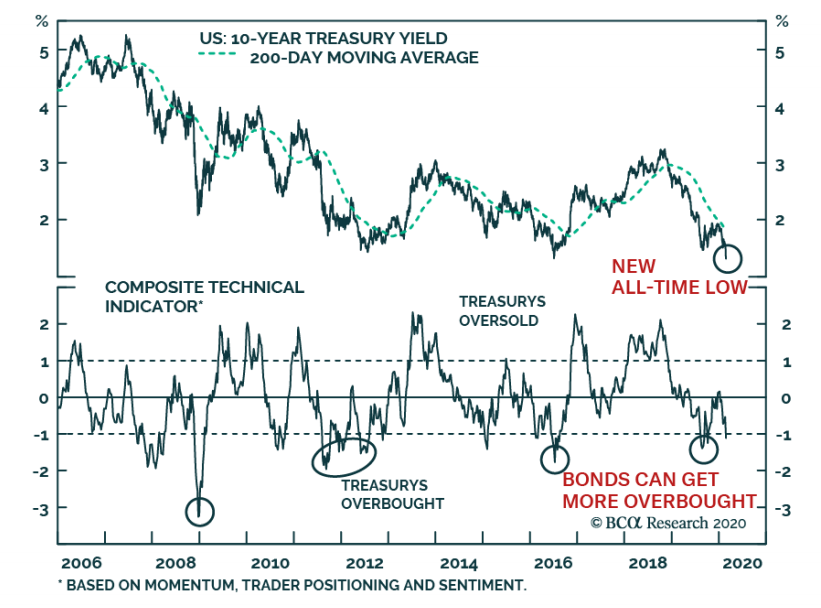 That means yields could fall much further as this indicator “tends to plunge deeper into overbought territory” at “climactic” bottoms. Yields, as we always remind, move in the opposite direction to prices.

The main story continues to be coronavirus, which as of Wednesday morning, has killed 19 in Iran, left one German in grave condition, led to a second death in France, and infected a U.S. soldier in South Korea. The coronavirus has infected more than 80,000 people globally and killed 2,762, mainly in China.

Federal Reserve Vice Chairman Richard Clarida said it was “too soon to even speculate” on the impact of the virus on the U.S. economy.

The Democratic presidential candidates held another debate, with Sen. Bernie Sanders on the receiving end of criticism as President Donald Trump was blasted for his coronavirus response.

Every permanent Hong Kong resident will get a cash handout of about HK$10,000, or $1,200, as that economy reels from the twin impact of the coronavirus and political protests.

It is bumpy for Martians — a NASA probe has detected over 450 significant seismic events since touching down in 2018.

There goes the neighborhood — restoration work on the U.K. Houses of Parliament unearthed graffiti from 169 years ago.