Home
Stocks
Need to Know: Years of stock gains are ahead, but also ‘scary’ drops, says strategist
Prev Article Next Article
This post was originally published on this site

Does that mean we can now start wringing our hands over phase two? While a re-escalation in U.S.-China tensions is always possible, optimism is lingering for now, with the Dow DJIA, +0.45%  and S&P 500 SPX, +0.43% pointing to fresh records on a light earnings day.

Our call of the day from the founder and chief executive of Ciovacco Capital Management, Chris Ciovacco, tells MarketWatch that investors should prepare for several more years of this bull market, albeit with some “scary pullbacks occurring along the way.”

Ciovacco made the case in May and October that equities have at least two more years of gains ahead. While 2019 wasn’t completely smooth for investors, the S&P 500 ended up rewarding faithful bulls with the best annual gain since 2013.

He said the bigger picture for stocks is now coming together. “A sound argument can be made that the stock market made a cyclical low in 2018 within the context of a secular trend,” Ciovacco said. He was alluding to that big equity drop in December 2018, while a secular trend refers to a rising or falling market trend. It can last from five to 25 years, peppered by smaller bear or bull markets, respectively. 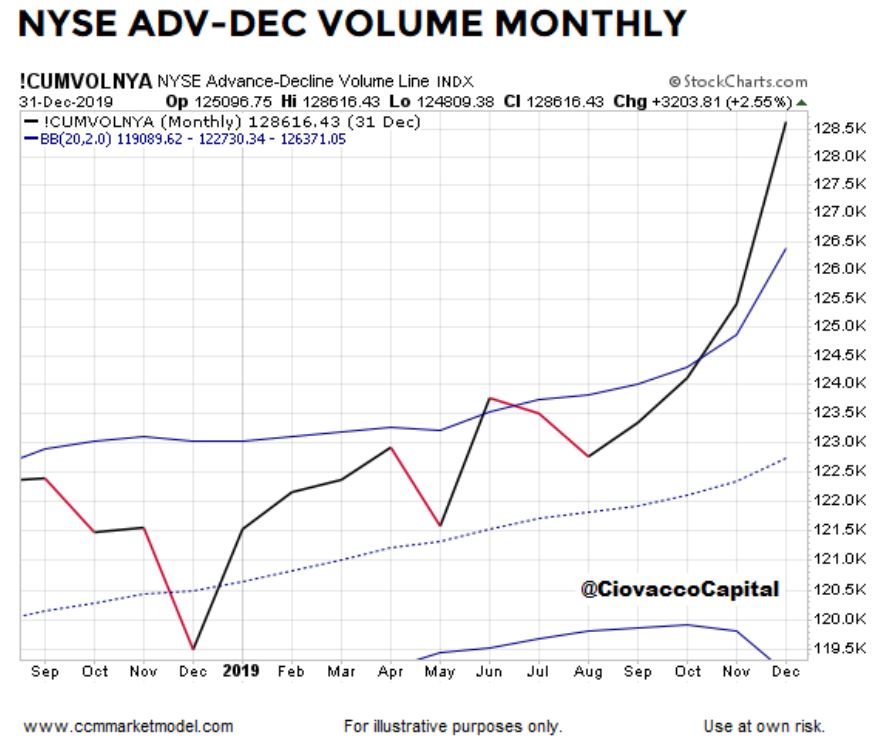 He pointed to the above chart that shows “rare and lopsided market breadth that has marked the early stages of stock moves that began in 1982, 1985, 1991, 1995, 2003 and 2009.” Market breadth refers to the number of stocks advancing versus those declining, and when more stocks are rising it can confirm an uptrend and that bulls are at the helm.

“Consensus has been saying ‘late cycle’ for a few years now,” said Ciovacco. Indeed, some have been worried that markets and the economy have had a good run, but it is reaching the end. “History says we should be open to early-to-mid cycle in terms of a secular stock market trend,” he said.

Read: The last time this ‘clear danger’ sign flashed in the stock market was 1999

Read: Winklevoss twins say Wall Street has yet to really get involved in cryptocurrencies

The below chart from The Daily Shot shows the Cass Freight Index, which measures monthly freight activity and can be used to monitor economic trends in North America. It reveals how a freight recession deepened in December, with the 2019 decline “the worst in a decade.” 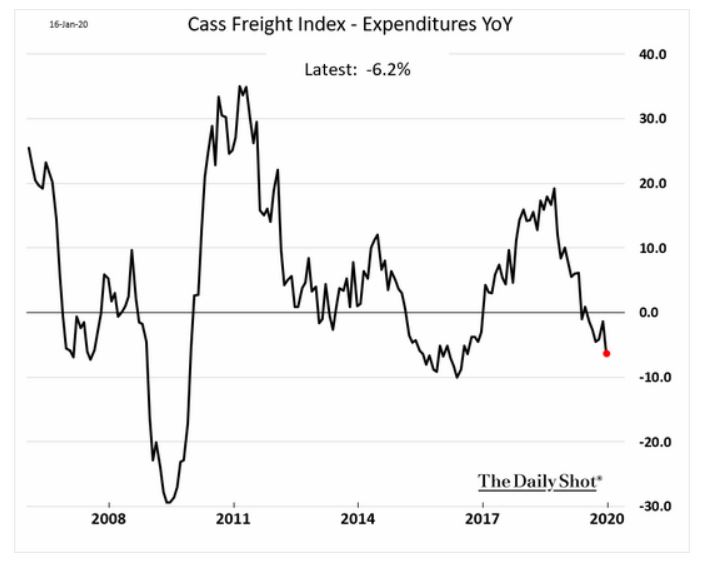 Weekly jobless claims fell for a fifth-straight week, retail sales were solid in December, the Philadelphia Federal Index jumped to its highest level in eight months and import prices rose 0.3%. Business inventories and a home builders index are still to come.

Shares of Morgan Stanley MS, +5.63%  are rising after the bank’s earnings and revenue beat forecasts. Signet Jewelers SIG, +33.38%  shares are climbing after the jewelry retailer lifted its outlook. Brokerage Charles Schwab SCHW, +1.32% missed profit forecasts and the stock is down.

Author Stephen King has been criticized for his comments on Oscars diversity.

European lawmakers want all smartphones to have the same charging point.