Home
Stocks
Netflix’s earnings: The price tag on global domination is getting clearer
Prev Article Next Article
This post was originally published on this site

On most accounts, the earnings report proved Netflix’s NFLX, -3.58%  resilience to pressure from upstart competitors Disney+ and Apple TV+. The company reported 8.8 million new paid subscribers, compared with expectations of 7.9 million. In the U.S., there were a net new 550,000 subscribers versus 589,000 expected. International came in at 8.33 million, better than forecasts of 7.17 million. In total, the company had 167 million global paid subscriptions.

Also on Netflix: How the company could nearly double its subscriber count by 2025

And: Netflix ends year strong, but questions surface about 2020

Netflix is where many great tech companies have ended up: dominating a saturated market in the U.S., with the next phase of growth coming from overseas. Facebook FB, -0.05%, for instance, has reported 1%-2% monthly active user growth in the U.S. for many consecutive quarters.

Meanwhile, competitors Apple AAPL, +0.36%  and Disney DIS, +0.31%  are way behind. Netflix claims 87% of over-the-top (OTT) subscribers in the U.S. and 50%-70% of subscribers in developed regions such as Europe. In addition, Netflix penetration is at 11.8% of subscribers in Asia-Pacific and is set to grow to 14.3% in 2020, with double digits in Asia being no small feat for an American media company.

Netflix’s numbers put a price tag on global domination: Free cash flow (FCF) was an astonishing negative $3.3 billion for 2019. The company forecasts negative free cash flow of $2.5 billion for this year. It’s expensive to produce high-quality local originals for many geographic regions. Still, the company said in its release that the “plan is to continually improve FCF each year and to move slowly toward FCF positive.” 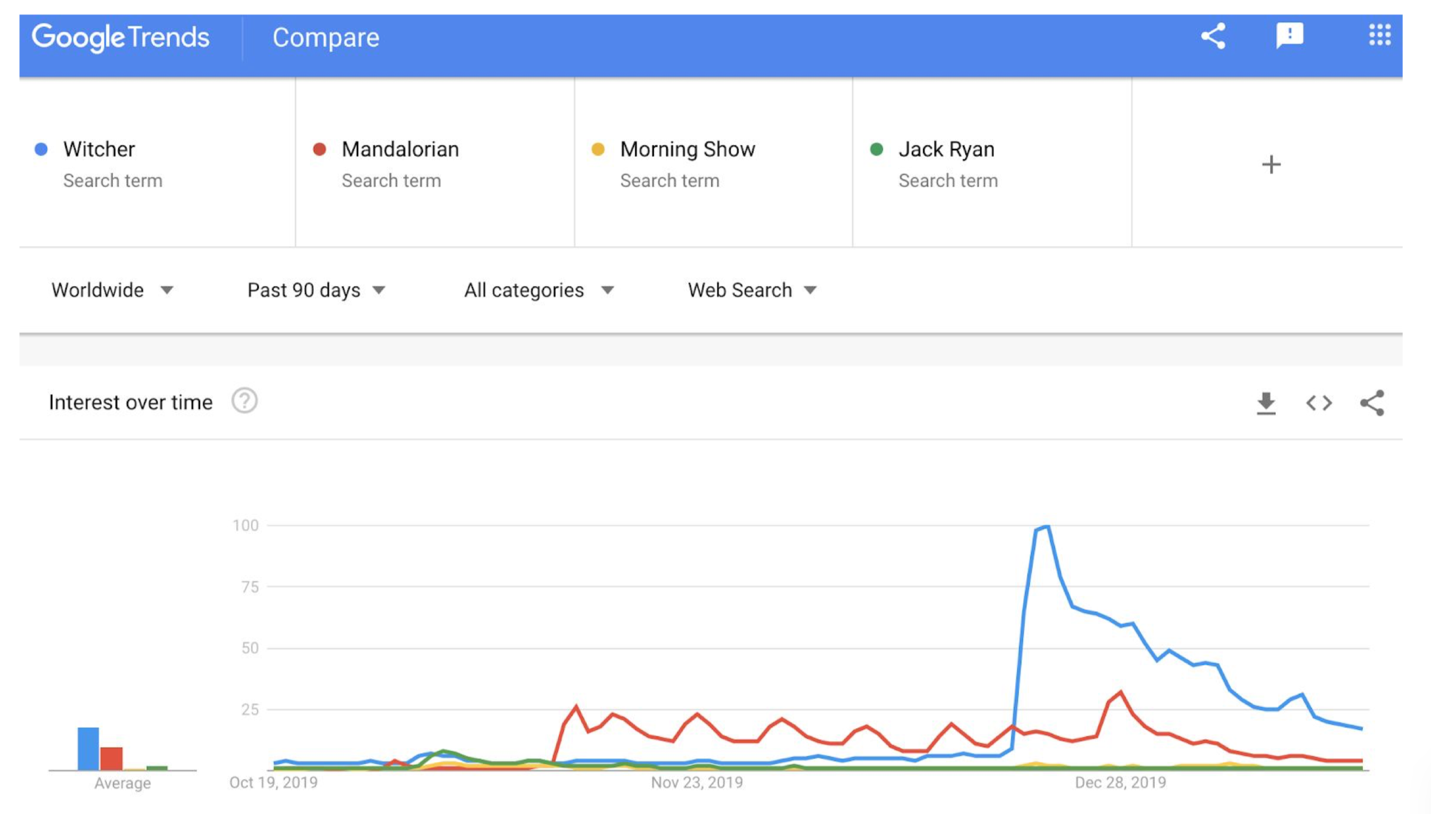 Netflix’s content quality is reaching a level never before seen in either Hollywood or on television. The company is up for 24 Oscars, more than any other major Hollywood studio, while simultaneously claiming 19 of the top 20 streamed shows for two years in a row. (Source: 2018 and 2019.)

Top-20 streaming lists prove that not only is Netflix in the lead by a wide margin on subscribers, but is also crushing its competitors with user engagement. For instance, Amazon Prime is the second-most popular streaming app by subscriber numbers, yet does not rank on the top streaming lists, even with its top show, “The Marvelous Mrs. Maisel.”

As more streaming services enter the market, the importance of pleasing members and a focus on user engagement metrics are things Netflix is keenly aware of. This strategy worked for Amazon’s AMZN, -0.24%  Jeff Bezos, who ignored Wall Street’s pressure for the company to turn a profit.

User engagement will continue to come under scrutiny across all OTT streaming services, especially as Disney and Apple run promotions for free subscriptions and Amazon packages its OTT app with its e-commerce Prime delivery offering. In other words, competitors are likely counting subscribers who signed up for the service as part of a free promotion, yet are not very engaged with the content (at a time when Netflix has been rising prices).

Therefore, investors would be wise to compare the top streaming lists and other engagement rankings, and not only rely solely on subscriber numbers when judging who is in the lead for OTT streaming.

As noted in MarketWatch, Netflix is changing the definition of viewership from any customer that streams 70% or more of a single episode to a new definition that only requires a customer to view any offering for two minutes or more.

The new definition in viewership is likely an attempt to level the playing field as Netflix becomes more aligned with how The New York Times, YouTube and the BBC iPlayer count views. The company also included Google GOOG, +0.10% GOOGL, +0.13%  search trends in the earnings letter that depicted its series “The Witcher” exceeding other competing content, such as Disney’s “The Mandalorian” or Apple’s “The Morning Show.”

As for Netflix’s stock price, it has held the $385 resistance zone since late 2018. This is an important level that Netflix is looking to retest in the coming days and weeks. Netflix just reclaimed the 50-day and 200-day simple moving averages (SMAs), which will now act as support. Look for Netflix to either break through $385 with heavy volume or to retest the October low of $250.

Disclosure: The stock analysis and pricing information provided are opinions and not financial advice. Beth Kindig does not own Netflix shares at this time, yet may enter a position in the future.

Kindig is a San Francisco-based technology analyst with more than a decade of experience in analyzing private and public technology companies. She publishes a free newsletter on tech stocks at Beth.Technology and runs a premium research service.