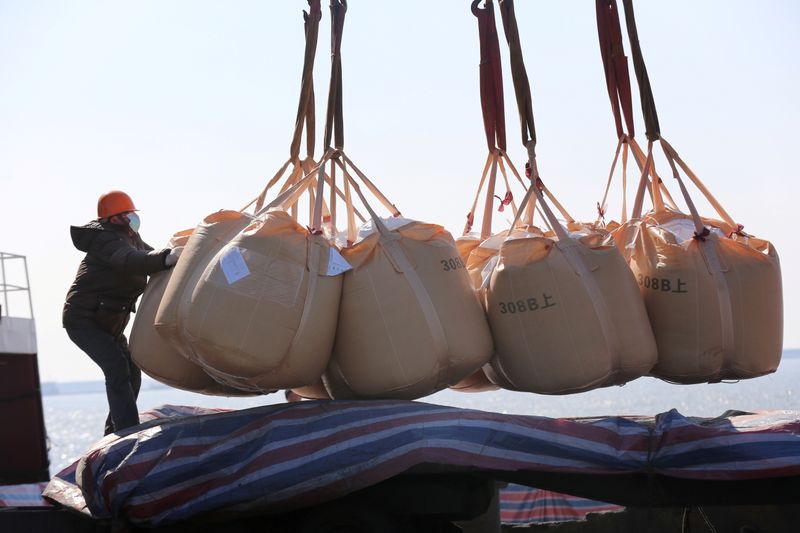 By Muyu Xu and Praveen Menon

BEIJING/WELLINGTON (Reuters) – The economic impact of China’s coronavirus lockdown is being felt across the globe, with exporters, miners and manufacturers of everything from coal and timber to meat and fruit facing delays and potential shipment cancellations.

As the most populous nation and factory floor for most of the world’s manufactured goods, China is normally the largest and most voracious consumer of a slew of global raw materials, fuels and foods.

But the combination of an extended Lunar New Year holiday and the rapid spread of the deadly coronavirus that has killed over 420 people and restricted the movement of millions more has jammed logistics channels into and across the country.

That’s caused supply line backups stretching all the way to New Zealand, the United States and beyond. However, for now, the effect is more pronounced for smaller items such as food and forestry products – bulk items like iron ore, fuel and coal have mainly automatic offloading and transfer to storage that has not been affected.

Exports of goods from China have also been disrupted, leading to other supply chain problems. Hyundai Motor (KS:) has said it will suspend production in South Korea, its biggest manufacturing base, because of the lack of spare parts from the mainland.

At Gisborne’s Eastland Port on the east coast of New Zealand’s North Island, log exports to China – the port’s main source of revenue – have been halted until further notice, while forestry workers across New Zealand have been told to go home. The port is the country’s second largest log exporter.

China is by far the largest market for New Zealand’s export logs, earning half its annual log income from the country.

“The industry is reeling a bit as you would expect,” said Prue Younger, CEO for the Forest Industry Contractors Association.

For a full coverage of the coronavirus outbreak click, https://graphics.reuters.com/CHINA-HEALTH/0100B59Y39P/index.html

Compounding the impact of port congestion are the several city-wide lockdowns aimed at stopping the virus’ spread that are preventing people from getting to work.

That is leading to reduced staffing for all the necessary functions at typical entry ports, such as customs officers and freight-handling and inspection workers.

There are also reports of a shortage of pilots for tugboats, meaning large ships now take longer than normal to dock at certain ports.

Officials at several of the larger ports say they have been able to sustain normal operations but smaller port facilities are struggling.

“Our port and docks are running normally. But the real problem now is the downstream receiving ports, such as (around) Shanghai and Ningbo,” said a logistics manager at Yingkou port in the northeastern province of Liaoning, a major iron ore and coal hub.

“What we heard from their report is that they don’t have enough people to drive trucks and boats to transfer goods out of the ports by road and by river. So they are having congestion and want us to slow down our pace to send vessels to them.”

The manager of a state-backed logistics firm in Ningbo said that the waiting time has swelled to “at least four days” to unload river barges due to the staffing shortages.

But an even bigger problem, he said, is the weak downstream demand due to the extensive lockdowns.

“Traders are supposed to get their goods and sell it to downstream users, but right now they can sell to nobody. So they just stock it at ports, making less and less space for further goods to come in.”

The knock-on effects of those delays are starting to be felt farther and farther afield.

U.S. exporters of agricultural goods said some container shipments may be getting delayed due to uncertainty about the grace period for demurrage, or the fees owed to cargo buyers for any delivery delays.

Roughly 20 large ports and two interior shipping firms across China have reduced or removed demurrage and detention fees for container, bulk and oil shipments through February 9 to try to sustain the flow of goods to market.

Even so, exporters with weeks-long journey times to China remain concerned about the potential for lengthy delays once their goods arrive, especially for food that is liable to spoil if held up.

“Carriers extended the grace period to February 9, but beyond that the shippers could face steep penalties,” executive director Peter Friedmann at the Agriculture Transportation Coalition, a U.S.-based industry body

He added that normal demurrage fees for refrigerated containers – used to ship fish, meat and fruit – could run to $350 per container per day, potentially leading to steep losses on low-margin shipments of perishable goods if offloading delays are extended.