Home
Stocks
One possible coronavirus side effect — cheaper almonds for U.S. shoppers
Prev Article Next Article
This post was originally published on this site 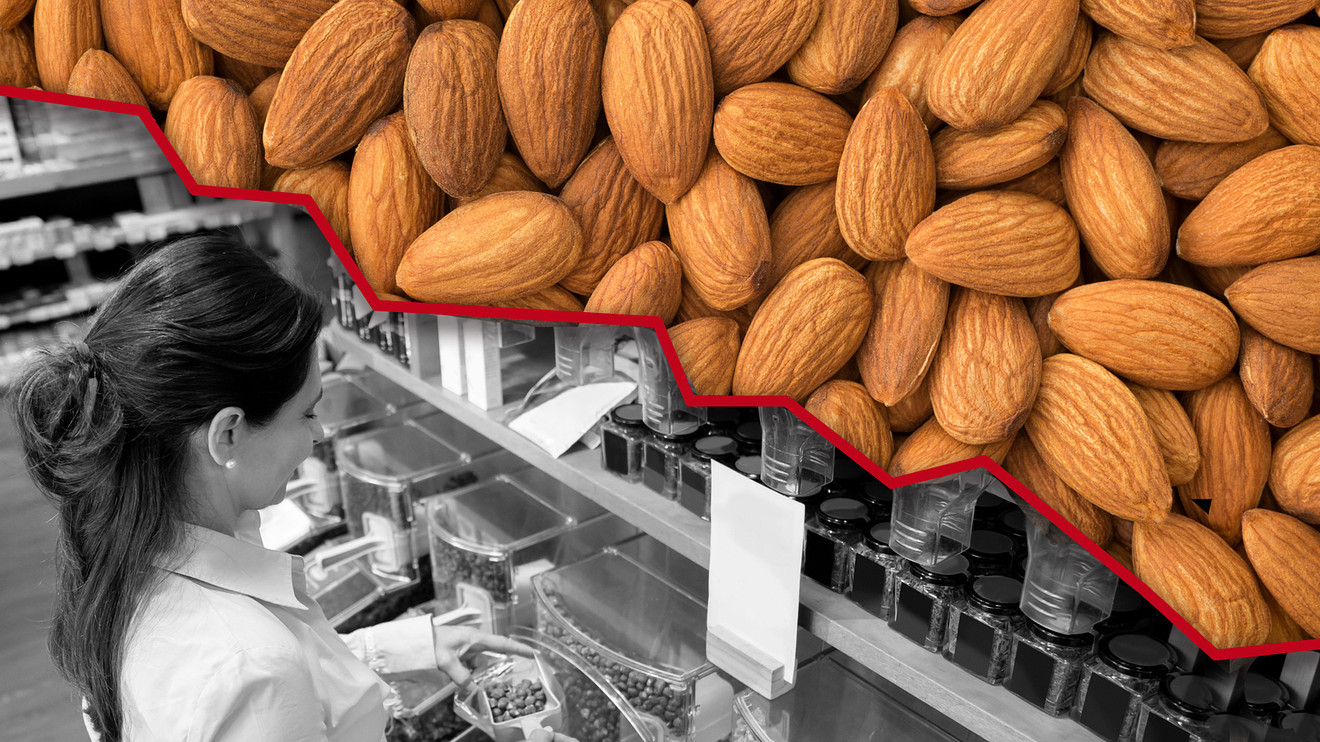 The spread of the novel coronavirus across China has slowed shipments into Chinese ports — and that could soon make products like almond milk cheaper for U.S. consumers, experts told MarketWatch.

As the second-biggest buyer of California almonds, China purchased more than 100 million pounds last year. With fewer workers in China available to retrieve shipments from the select number of ports that are still open, almond growers in the U.S. may soon have an almond surplus on their hands, which could lead to lower retail prices for U.S. shoppers, two experts told MarketWatch.

Some 80% of the almonds consumed around the world are produced in California. Last May, the U.S. Department of Agriculture predicted that the U.S. would grow 2.5 billion pounds of almonds this year — the biggest-ever harvest for a single year, up nearly 9% from last year. Producers appear to be on track to meet the USDA’s forecast, according to the Almond Board of California.

That record-setting harvest, coupled with China’s difficulties purchasing the crop, could result in unusually high inventory for U.S. growers, said Tom O’Brien, the president and co-founder of Global Resources Direct, a Chicago-based food commodity exporter, importer, supplier and trading company. To get rid of the excess supply, they will need to offer lower prices, O’Brien said.

“You could buy almond butter cheaper but you wouldn’t see it for three to four weeks,” O’Brien said. Any price drops wouldn’t appear immediately on store shelves because export contracts are often made a month in advance, he added.

Since Feb. 7 the wholesale price for certain varieties of whole natural California almonds has fallen from $2.87 per pound to $2.52, said O’Brien, who has access to advance wholesale prices of almonds that are not available to the general public. That decline is one of the fastest drops he has seen since 2015-2016, he said. At that time, the wholesale price of almonds fell from a record high of $4.70 a pound in August 2015 to $2.60 by January 2016. That was primarily due to a larger than expected harvest.

Retail prices for almonds and almond-related products can be relatively pricey for consumers compared with other nut products. Justin’s, one of the most popular brands of almond butter, sells a 16 oz. jar for $11.99. (That compares to a 16 oz. jar of Jif SJM, -4.04%   peanut butter for $2.29 at Target TGT, -3.85%. ) Justin’s did not respond to request for comment on whether it would lower the prices of its almond products.

‘The coronavirus impact on almond prices will mean lower prices here at home.’

Amazon AMZN, -2.07%   also sells almonds under its own brand, Happy Belly. A 48 oz. bag sells for $15.99. After the 2017 drought in California, the price for the same bag of almonds on Amazon rose to $22.09 in May 2018, according to camelcamelcamel.com, a site that tracks prices of products sold on Amazon. Amazon did not respond to a request for comment on whether it would lower the price of its almonds or other almond goods sold on the site.

Consumers are very sensitive to price changes in almond products and tend to purchase a lot more if the price drops by even a couple of cents, said Gökçe Soydemir, a Foster Farms-endowed professor of economics at California State University Stanislaus.

“The coronavirus impact on almond prices will mean lower prices here at home,” Soydemir said. “Producers will try to entice consumers to switch to consuming almond milk by lowering the price.”

Like consumers in the U.S., many Chinese shoppers have shifted to purchasing almond milk as an alternative to traditional dairy. In China, almonds are also used to make bread, candies and traditional desserts. The nut in its raw form also appeals to health conscious middle-class households, the number of which have doubled since 2006, according to Marketing to China, a site that tracks Chinese consumption trends.

Last month, China purchased 2.9 million pounds of almonds from the U.S. When China placed price tariffs of 60% on U.S. almonds imported into China last year, demand from China held up, even though the per pound price of almonds was 15% higher compared to 2018.

But now that several Chinese ports have shut down entirely, the volume of traded goods from major Chinese ports is down more than 20% since Jan. 20, according to figures from maritime data provider Alphaliner provided to The Wall Street Journal. This has affected nearly all companies that do business in China and has hindered their ability to meet revenue expectations.

Meanwhile, demand for almond milk, one of the most popular dairy alternatives, has climbed in recent years. The most popular brand in the U.S., according to Statista, is Blue Diamond’s Almond Breeze. Walmart WMT, -3.89%  charges $1.99 for a 32 fl. oz. carton of unsweetened Almond Breeze, compared to $2.11 for 64 fl. oz. carton of regular cow milk.

Green-minded Generation Z and millennial consumers who “care more about the environment and sustainability are willing to pay more,” are driving demand for almond milk, said Phil Lempert, a retail and grocery analyst. Although a sizable amount of water is used to grow almonds, it is viewed as a more sustainable alternative to milk because even more water is required to raise cows.

Starbucks SBUX, -1.56%  has marketed the plant-based milk to its customer base, which is willing to pay more for environmentally-friendly products, said Lempert, who runs the Supermarket Guru column and website, which documents food store trends. Starbucks charges an additional 80 cents for beverages that use almond milk in place of traditional milk.

Others were skeptical that coronavirus would result in almond inventory pile-ups.

“We are not very wary about how coronavirus will affect almond growers in the U.S.,” said Michael Kelley, president and CEO of Central California Almond Growers Association, a nonprofit, grower-owned cooperative that hauls and shells members’ almonds.

“We don’t see any immediate issues with regard to exports at this time,” largely because growers are still able to export almonds to their No. 1 customer, India, Kelley said. Last January, the U.S. exported $60 million worth of almonds to India and $13 million to China, according to data from the USDA. Almond export data for January 2020 will be released on March 6.

Kelley did however acknowledge that ports being closed in China could become a problem for growers in the U.S. who export there. “It’s just how long the boats will wait to get off-loaded and whether there will be contractual issues that arise,” Kelley said.

Separately, the Almond Board of California confirmed there has been a recent drop in almond prices, but blamed the decline on this year’s record crop, a result of “perfect 2020 bloom weather,” it said in a statement.

“The recent events in China involving the coronavirus are disconcerting on many levels, and no doubt, have altered consumption patterns in certain Chinese metropolitan areas,” it said. “As the virus continues to spread internationally, we will be monitoring the economic repercussions until the disease is under control.”

Warren Cohen, Blue Diamond’s vice president of international sales, also pointed to the same reason for lower almond prices. He declined to comment on whether the novel coronavirus or the record crop could result in lower prices for U.S. consumers at this time.

Another brand, Wild Soil Almonds, did not comment on any potential future price changes for its products. Its three-pound bag of raw almonds, which costs $25.99, is the 12th most popular item in the almond category on Amazon.

However, the company said it “would love to see some press about the benefits of almonds in an emergency. They can be stored for years in cool conditions and provide tremendous nutrition. Everyone should have them as part of their emergency kits.”