Home
Market
Options markets point to a potential bounce for U.S. stocks
Prev Article Next Article
This post was originally published on this sitehttps://i-invdn-com.akamaized.net/trkd-images/LYNXMPEG1S02D_L.jpg 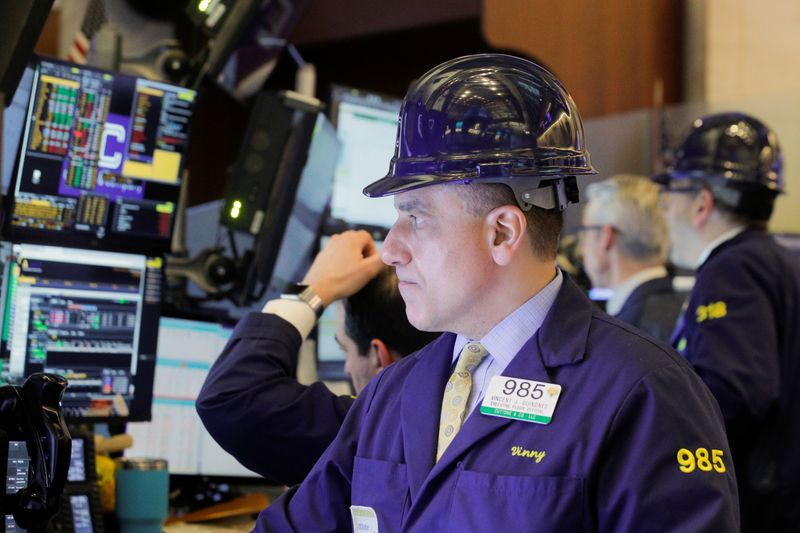 NEW YORK (Reuters) – Activity in stock options points to a possible rebound for battered U.S. equities, after markets notched their steepest weekly drop since the financial crisis as the coronavirus outbreak accelerated beyond China’s borders.

The rapid rise in market volatility has lifted the price of short term futures on the Cboe Volatility Index () above longer term ones – an event that has historically been followed by a 7% median gain for the benchmark S&P 500 () within 30 days, according to research from market analytics firm Arbor Data Science.

The term structure inversion, as the pattern is known, has “been a historically reliable indicator, but we’ve never had coronavirus before,” said Christopher Murphy, co-head of derivatives at Susquehanna Financial Group.

Uncertainty over the trajectory of the virus and its economic fallout will likely complicate the picture for investors looking to determine an entry point into stocks by trying to discern potential peaks in volatility, some strategists said.

Even so, some investment managers have begun to suggest that selling may be nearing a crescendo.

“We’re moving into the zone where the S&P has earned its keep,” he said.

The S&P 500 has notched a weekly drop of 10% or more only 14 times in its history, and those declines have been followed by an average gain of 3.5%, data from Bespoke Investment showed. Gains over the next three months have averaged 5.6%, although the index has fallen more than it has risen in that time period, suggesting that the period after such big drops is usually volatile for markets.

Other corners of the options market demonstrated investor caution but not excessive fear, said RBC Capital Markets equity derivatives strategist Amy Wu Silverman. Trading, in her view, reflected investors moving to realize gains on their downside protection but often not replacing those hedges with positions guarding against a further fall.

Aside from a spike on Thursday, skew, which measures demand for puts versus calls, has remained near its average levels over the past six months for the SPDR S&P 500 ETF Trust (P:), according to data from options analytics firm Trade Alert.

That may be because investors saw more declines in stocks coming as the epidemic first unfolded in China before spreading outside the country, said Stacey Gilbert, portfolio manager for derivatives at Glenmede Investment Management.

While there is evidence some investors may not have hit the panic button, they don’t appear to have let down their guard, either. Expectations for further gyrations in U.S. equities remain elevated in relation to actual stock moves, Holzer at EAB Investment Advisors said.

The 30-day implied volatility for SPY was at 44% on Friday, whereas its realized volatility was at 25.3%, according to Trade Alert. That gap suggests investors have lingering concerns about further selling.

Even though equities have sold off significantly, there still remains potential for moves in other asset classes, such as credit, to cause ripples across markets, Holzer said.