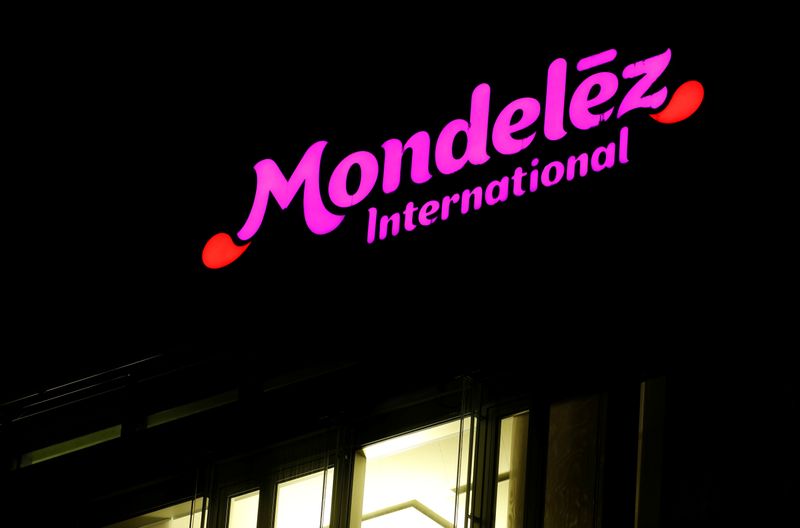 © Reuters. Logo of Mondelez International is seen in Opfikon

(Reuters) – Mondelez International Inc (O:), the maker of Oreos and Chips Ahoy cookies, on Wednesday said it expects first-quarter revenue will be impacted by the coronavirus spreading across China, and it has temporarily closed two factories.

The company reported quarterly revenue that beat estimates, helped by higher demand for its snacks in developing markets. Shares in Mondelez were up 2.6% after the bell.

Mondezlez’s chief executive, Dirk Van de Put, said the coronavirus is expected to have only a short-term impact. China accounts for nearly 4.5% of the company’s sales.

“It’s really too early to quantify for us at this point,” Van de Put said of the expected impact. “We are monitoring the situation closely.” Mondelez will update the market as needed, he added.

“We now have to see in the coming weeks what has happened with the sell-out during Chinese New Year,” Van de Put said. The Chinese government has asked Mondelez to keep two factories closed for 10 days to minimize the risk of infection, he said. Wuhan, China, is the epicenter of the virus, which has killed more than 160 people.

Van de Put also said Brexit is a risk to the company, but he does not expect to see an impact this year. “If there is no deal near the end of the year, that would possibly be a disruptor,” he said.

Emerging markets like China – where incomes and demand for e-commerce are rising – have become increasingly important to Mondelez as the consumer goods industry grapples with slowing demand in developed countries.

Mondelez has been pushing hard on investments and can still be in more stores, Van de Put said. He singled out growth in the company’s biscuit businesses in India and China, as well as strong chocolate and gum sales in each country, respectively.

The Illinois-based company has invested heavily in both countries in recent years, spending more on marketing and creating products. In China, for instance, Mondelez has been working for years with Alibaba’s (N:) online marketplace Tmall to expand its reach, creating novelties like wasabi- or hot chicken-flavored Oreos.

The company reported fourth-quarter revenue on Wednesday that beat estimates, helped by a 4.5% rise in sales from the Asia, Middle East and Africa business.

Net earnings attributable to the company fell to $726 million, or 50 cents per share, in the quarter ended Dec. 31. Excluding items, Mondelez earned 61 cents per share, a cent above analysts’ estimates, according to IBES data from Refinitiv.