Home
Stocks
Outside the Box: Bernie Sanders isn’t a radical — he’s a pragmatist who fights to un-rig the system
Prev Article Next Article
This post was originally published on this site 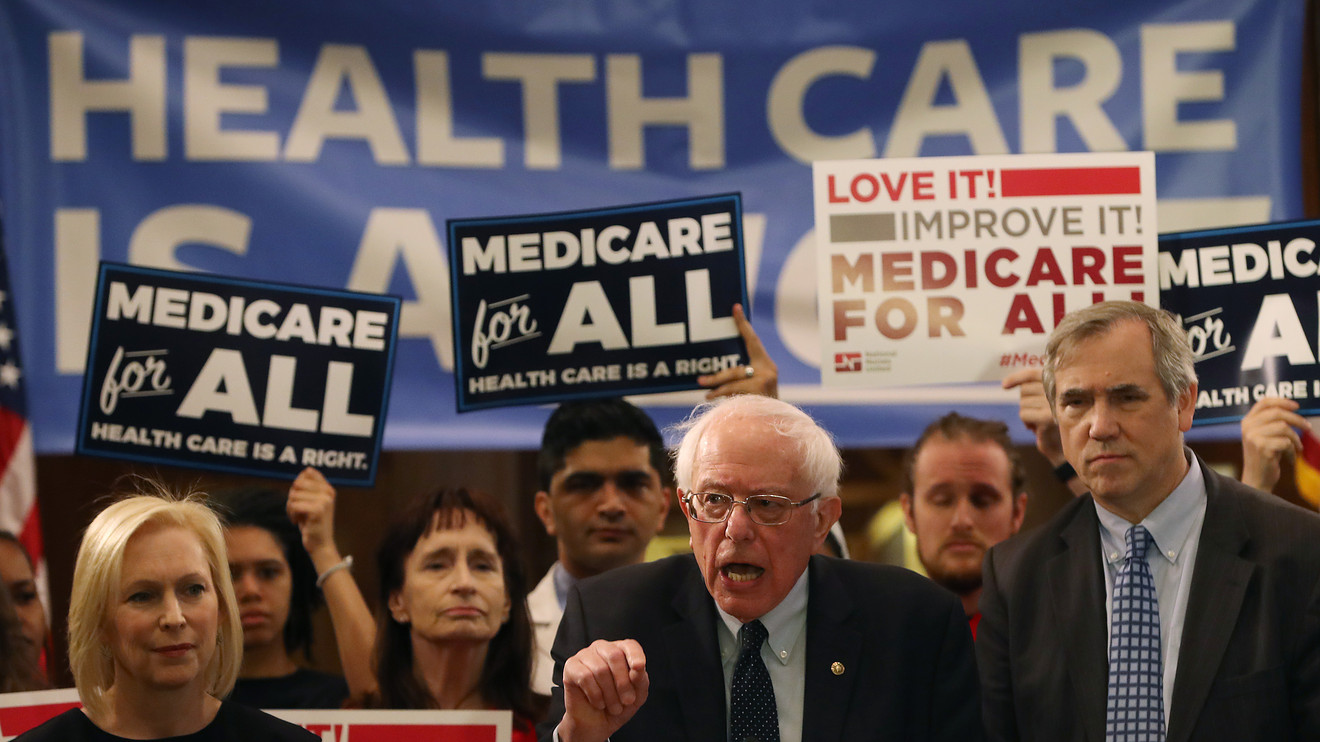 As Bernie Sanders continues to increase his standing in the Democratic primary, and his opponents in both parties feel the pain, there is an effort to paint him as an extremist of some sort. Someone who might even lose to Trump because of this alleged “radicalism.” But it’s not that easy to make the case on the basis of facts.

He has a 40-year track record as a politician. The things he is saying now are mostly what he has shouted from the mountain tops for pretty much the whole time. The main difference is that now, other Democratic politicians have joined him: on a $15 minimum wage, student-debt relief, free tuition at public universities, expanding Social Security, reducing income inequality, and some even on Medicare for All.

Read the latest news and commentary on Election 2020.

His actions speak even more consistently than his words: he understands that politics is about compromise. He fights hard for what he has promised to voters, but then takes the best deal he can win if it will advance the ball down the field, and prepares to fight again the next day.

That’s why he supported Obamacare when it was the best deal on the table — expanding insurance coverage to 20 million Americans, without the life-threatening exclusions for “pre-existing conditions.” This despite the fact that Obamacare was still quite a distance from Medicare for All — “health care as a human right” — that had been his passion and signature issue for decades.

But he is a “socialist,” his opponents cry, leaving out the first part of the term “democratic socialist” that Sanders always uses when this issue is discussed. There is much room to induce confusion here because the term “socialist,” in English, has a number of different definitions that have all become common usage over the years.

It can be used to mean anything from “communist,” as in the former Soviet Union, to the European social democratic or socialist parties that have governed for much of the past 70 years in countries such as France, Germany, Spain, and the U.K., not to mention the Scandinavian countries.

It should be clear to anyone who is not trying to frighten voters that Sanders is a social democrat of the latter, European variety. There will be no U.S. government takeover of the means of production under a Sanders administration.

The biggest expansion in government will be in public funding of health insurance. Like traditional Medicare, where less than 2% of expenses are administrative costs, public health insurance will be much more efficient than the current six times as much spent by the private insurance industry. And we won’t have 8 million people falling into poverty every year due to medical expenses, or worse, tens of thousands actually dying because of lack of access to affordable health care.

Sanders’ program is targeted at correcting a very harmful transformation of the U.S. economy that has taken place over the past 40 years.

Unlike the first three decades after World War II, when income gains were broadly shared as the economy grew, most of the increase in income has gone to those who already had much more than their share. Since 1993, for example, the top 1% of families captured an astounding 48% of the growth in this country’s income.

No wonder so many Americans feel like the system is rigged against them.

That right-wing transformation was mostly launched by the Reagan team, but it came to be accepted, and even deepened by some liberal political leaders as well. Perhaps this normalization of the radical changes of the past few decades is why some commentators perceive Bernie’s program — designed to reverse this damage — as “radical.”

Here it is important to note that the fight over this right-wing transformation has never been so much about “the market” versus “the state.” Almost every economy in the world is a mixture of both.

But the Reagan “revolution” and the counter-reforms that followed (e.g., the WTO, NAFTA, financial deregulation, permanent normal trade relations with China, anti-labor legislation and practices) were not so much about changing the relative weight of market and government.

Rather what changed most is that both markets and government were harnessed vastly more to redistribute income and wealth upward. The result is an America that is unique among high-income countries in the percentage of people who are employed full-time and yet struggling to get by, not to mention the more than 10 million children in poverty and more than half a million homeless people.

Sanders, in his reform program, seeks to use both markets and government to reverse this massive upward redistribution of income and wealth.

Of course, government has to take the lead with public investment where private investment would not be forthcoming — as in the transformation of some energy infrastructure to reduce carbon emissions.

But other important parts of Sanders’ program move the economy away from government toward more market-based solutions: for example, reducing the role of government-granted-and-regulated patent monopolies in driving up the price of pharmaceuticals, medical supplies, and health-care costs. Or breaking up other monopolies in favor of more market competition, in the technology and financial sectors.

Sanders also favors a less interventionist role for the Federal Reserve in the labor market, as the Fed has triggered almost all U.S. recessions since the end of World War II (except for the last two) by raising interest rates when this was unnecessary.

And he has led the way to reduce one of the most powerful and destructive abuses that our government has unleashed upon Americans and the world: the terrible, unnecessary, “forever wars” that most Americans now reject. Some of his best allies in this fight have been conservative Republicans who are skeptical of this aspect of “big government” — as has been true in the historic fight to stop U.S. military participation in Saudi Arabia’s genocidal war in Yemen.

In short, Sanders is much more pragmatic and less ideological than his opponents would like to admit. But we can expect to hear more — from various quarters — of this labeling him as a “radical,” if he continues to gain on his competitors in the Democratic primary.

Mark Weisbrot is co-director of the Center for Economic and Policy Research in Washington. He is the author of “Failed: What the ‘Experts’ Got Wrong About the Global Economy” (2015, Oxford University Press).