Home
Stocks
Outside the Box: One thing Trump won’t brag about in his State of the Union: his plans to cut Social Security, Medicare and Medicaid
Prev Article Next Article
This post was originally published on this site 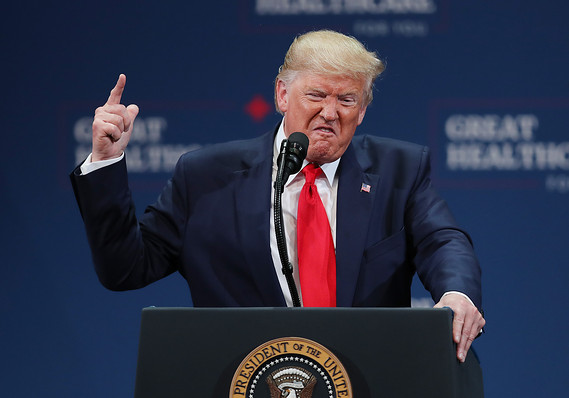 President Donald Trump tells supporters in The Villages, Fla., in October 2019 that he’ll always defend Medicare, just days after signing an executive order that opens the door to further privatization.

Later this evening, Donald Trump delivers his third State of the Union address. If past speeches are any indicator, we know tonight’s speech will be filled with a number of exaggerations and outright falsehoods — especially when it comes to the economy.

Since he signed the bill two years ago, Trump has heralded the 2017 Tax Cuts and Jobs Act as this administration’s greatest accomplishment, declaring that it is “helping everybody so much.”

But this couldn’t be further from the truth. While the law gave giant tax breaks to the wealthy and big corporations, the rest of us were left with crumbs — at best. The wage growth that Trump promised hasn’t materialized, and 100 million Americans are going to be left paying higher taxes.

(As MarketWatch began reporting the same month that the Republican tax overhaul was signed into law, corporate stock buybacks have been a major beneficiary.)

Another opinion: Trump should offer a new deal for the middle class in his State of the Union speech

Now, Trump is using his tax cuts, which he promised would be a boon to the economy, as an excuse to threaten cuts to Social Security, Medicare and Medicaid — programs Americans have been paying into with every paycheck, and programs the federal government is required, by law, to offer to every single eligible person.

After the law passed, Democrats warned that Trump and his cronies would point to the explosion of the federal deficit as a reason to cut Medicare, Medicaid and Social Security. Republicans, they cautioned, would alter the structure of the programs, or shift the understanding of who was eligible for this program, or limit the program in other ways.

Republicans did not disagree. Paul Ryan, who was the speaker of the House, announced as the tax bill was being considered that his next policy priority was reforming the Medicare, Medicaid and Social Security programs. He claimed they were too expensive, that they “are the big drivers of debt” and that reining in their spending would help grow the economy.

Turns out everyone’s predictions were right: Republicans are targeting Medicare, Medicaid and Social Security. No surprise there.

In 2016, then-presidential candidate Trump promised he would be unlike any other Republican and never cut these programs.

See: This word describes Social Security — but not everyone wants to hear it

In a lazy nod to his campaign promise, he said these changes would come from finding savings in the programs, not reducing benefits, but reality does not bear that out. He also proposed new work requirements for Medicaid and supported every bill Republicans put forward to repeal the Affordable Care Act — every one of which would have shrunk Medicaid.

And last week, his administration put forward a new rule to cap Medicaid spending by letting states accept block grants that would only cover some of the program’s costs.

Last month, Trump gave up the pretense of upholding his campaign promise. In an interview he gave in Davos, Switzerland, on the sidelines of the World Economic Forum, he said that cuts to these vital programs were most definitely on the table.

Trump, as he often does, said the quiet part out loud: He doesn’t care about hard-working Americans — only the wealthy and privileged. He signed a disastrous tax law, and now he’s signaling to the American people that he needs to cut Medicare, Medicaid and Social Security to pay for it.

In the days following his comments, he tried to retract his incredibly unpopular proposal. He even tweeted that he would “save” Social Security. And some Republicans went as far as to argue that the comments were part of the president’s genius: that he is able to say one thing and people can read many things into it.

But the damage is done. Tonight, Trump is undoubtedly going to praise the 2017 tax law, and maybe even propose another round of tax cuts. (Economic adviser Larry Kudlow suggested as much in a Tuesday interview.) Trump won’t mention the fact that he and his party are hell-bent on cutting Medicare, Medicaid and Social Security, but make no mistake: That’s their main goal.

This mess will come back to haunt Trump and should be a warning to any Republican who supports cuts to these programs. Americans do not support anything that will put these programs at risk. That is why the 2017 tax scam is as unpopular as it is.

It’s why Americans want to tax the rich — so we can protect Medicare, Medicaid and Social Security. Donald Trump is in for a rude awakening if he thinks people are not paying attention. We are.

Dana Bye is the campaign director of Tax March, a grassroots advocacy organization focused on tax transparency and tax fairness.