Home
Stocks
Outside the Box: The Fed has one more surprising way to jolt the economy
Prev Article Next Article
This post was originally published on this site

Following the Federal Reserve’s 50-basis-point rate cut on Tuesday, the fed funds target range stood at 1.0%−1.25%. The financial markets continued to be volatile, and U.S. stock markets declined on concern that the rate cut may not be enough to offset the economic impact of COVID-19.

But with the policy rate so low, an important question now is, what more can the Fed do?

We have seen an incredible disruption to both financial markets and lives as people look to protect themselves from the physical spread and the potential economic impact of the coronavirus. Amid dramatic market volatility, U.S. Treasurys TMUBMUSD10Y, -0.34% have rallied and equities SPX, -2.81% DJIA, -2.94% have plunged. Over the past week, a chorus of participants called on the Fed to act immediately, and it responded by cutting the policy rate.

Clearly, leadership at the Fed is concerned about the ramifications of the coronavirus. After equities plummeted for a week, Fed Chair Jerome Powell on Feb. 28 let investors know in a statement of just one paragraph that the Fed will “use our tools and act as appropriate to support the economy.”

Indeed, since 2019 the Fed has been easing through a combination of rate cuts and balance-sheet expansion via purchases of short-maturity Treasurys. Offsetting some of this easing, the Fed has been simultaneously tightening by selling (running off) $20 billion of mortgages per month. We believe this monetary policy “tool” of directing the size of the Fed’s balance sheet is potentially more powerful than cutting the policy rate, and with a far lower likelihood of unintended consequences.

The Fed can end the runoff of mortgage paydowns from its balance sheet, reducing an unnecessary headwind to mortgage rates and allowing homeowners to benefit from the all-time lows in rates being realized in the Treasury market. While it is true that Treasury yields have reached all-time lows, the mortgage rate to homeowners remains well above the lows of 2016. Mortgage rates are not falling as quickly, likely in part because the Federal Reserve is selling. 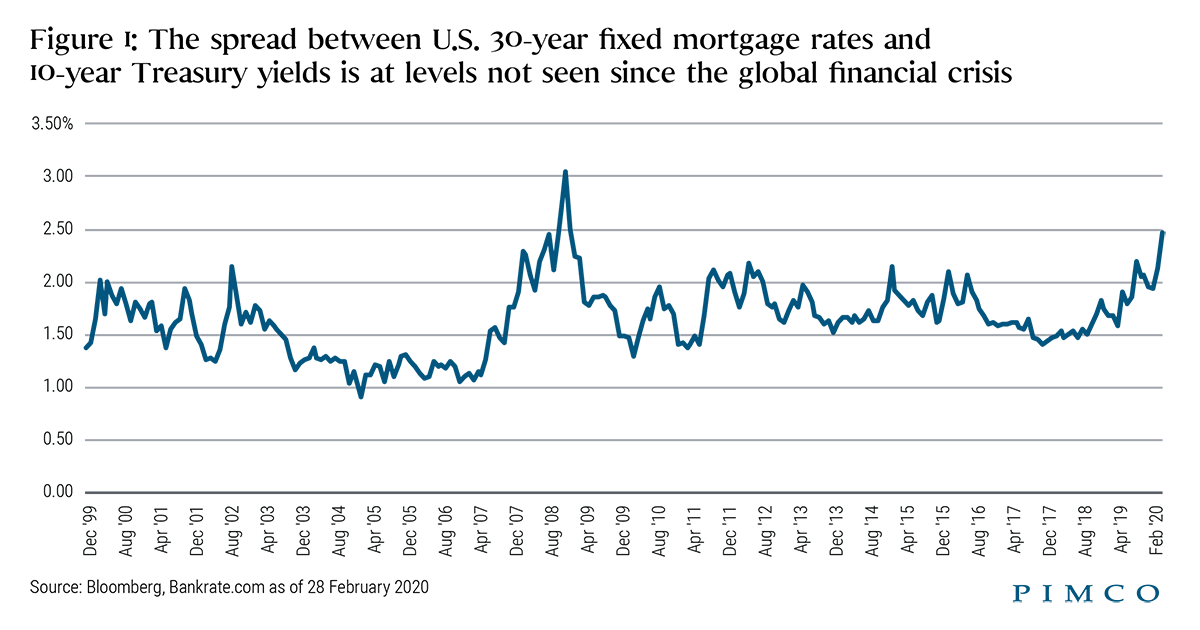 Additionally, when we compare 30-year mortgage rates to 10-year Treasury yields, it is notable that the difference is now at the highest level we’ve seen since the financial crisis (see chart). By simply stopping the runoff/selling, we believe the Fed would be able to reduce mortgage rates by at least 35 basis points. This in turn would allow many homeowners to refinance at lower rates, thereby giving them more disposable income or increasing its savings rates — either would help them withstand an economic shock. The lower the interest rate on a home mortgage, the faster a home loan amortizes.

Ending the balance sheet unwind in mortgages would likely provide an economic jolt to the U.S. consumer while simultaneously increasing savings rates. Quite a powerful tool the Fed has at their disposal.

Mike Cudzil and Daniel Hyman are portfolio managers at Pimco, a unit of Allianz SE. This was first published on Pimco’s blog as “The Fed Has Another Lever to Pull” and is republished with permission.

More on the Fed rate cut