Home
Stocks
Outside the Box: Which Judy Shelton will the Fed get? Gold standard advocate or Trump defender?
Prev Article Next Article
This post was originally published on this site 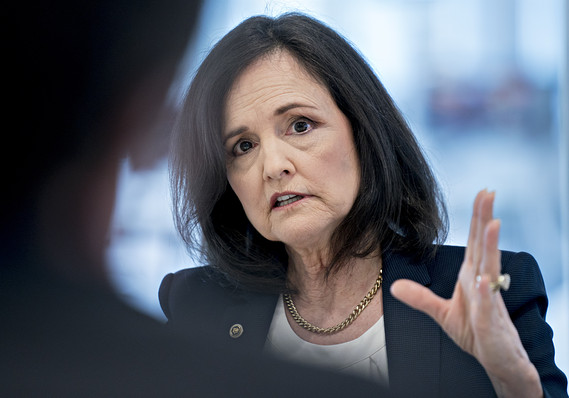 President Donald Trump officially nominated Judy Shelton on Tuesday to join the Federal Reserve’s Board of Governors to help shape monetary policy. But which Judy Shelton will the Fed get?

After describing low interest rates as an assault on democratic capitalism during the Obama years, Shelton now embraces lower rates and suggests that the next Bretton Woods conference to reshape international monetary arrangements should be held at Mar-a-Lago.

Many have already written about her flip-flops, including the Wall Street Journal’s Greg Ip and Bloomberg’s Ramesh Ponnuru. As Ip writes, “Having accused the Fed, under Mr. Obama, ‘of catering to the political class,’ she now says it should support Mr. Trump’s agenda by cutting interest rates to ‘ensure maximum access to capital.’”

If the Senate is uncomfortable confirming someone willing to jettison her longstanding positions to win a position of power, they should not confirm Shelton. But let’s assume they do confirm her, and that she flips back once she is on the Fed. What was her pre-Trump vision for monetary policy?

In 2012 she wrote that the end point for her desired reforms could be a “Universal Gold Reserve Bank.” This institution “would have the potential to become a sort of global monetary authority.”

This is consistent with her long written record.

She is not just a long-time supporter of the gold standard (for example, she began a February 2009 Wall Street Journal op-ed, “Let’s go back to the gold standard.”), Shelton’s vision is global.

The implication is that we don’t need the Federal Reserve, the institution she is seeking to join.

She told the Wall Street Journal in 2008: “At this point, dickering over whether Alan Greenspan should have formulated monetary policy in strict accordance with an econometrically determined ‘rule,’ or whether the Fed even has the power to influence long-term rates, raises a more fundamental question: Why do we need a central bank?”

Is this all pie-in-the-sky? Maybe.

The Wall Street Journal editorial board has encouraged Trump to think of Shelton as a chair-in-waiting.

But Bloomberg News reports that Shelton “would, if confirmed [as a governor], represent a potential chair-in-waiting. One administration official familiar with the matter told Bloomberg in July that’s an option once Powell’s term expires, or even before.”

And Fed chairs have vast powers to change the institutional arrangements, as Marriner Eccles, Paul Volcker and Ben Bernanke all did in various ways.

Shelton’s mentor, Bob Mundell, is the intellectual godfather of the euro EURUSD, +0.0091%  . Twenty years ago the Bundesbank made monetary policy for Germany; today the European Central Bank does.

Judging by her record, a Shelton Federal Reserve would like nothing better than to end the Fed and hand the powers to a new global monetary authority, the Universal Gold Reserve Bank.

Maybe the reformed Judy Shelton of the Trump years will stop short of such radical reform, especially while Trump is still in office. But there is little doubt that she would seek to advance the crusade of her career in more modest ways.

She believes that setting monetary policy to address domestic conditions is “selfish.” In the absence of a proper gold standard, she says she favors fixing the dollar BUXX, +0.01%   to rival currencies or gold. (Never mind that this would put American monetary policy at the whim of gold speculators and European central bankers.)

For Shelton, limiting the Fed’s power is the point.

Of course, this all assumes she would show up for the job. The last time the Senate confirmed her for a position — U.S. envoy to the European Bank for Reconstruction and Development — she missed about half the meetings, as the Wall Street Journal reported in August.

If the lousy attendance record, the ceding of monetary sovereignty and the flip-flopping for Trump don’t disturb the Senate, perhaps Milton Friedman’s assessment of Shelton will. In 1994, he wrote of then-colleague Judy Shelton’s op-ed, “It would be hard to pack more error into so few words.”

A few years ago Shelton supported a Virginia effort to study an alternative Virginia currency should the dollar collapse. Since then that effort has faltered.

Perhaps America would be better served if she focused on helping her home state of Virginia prepare for a catastrophe rather than causing one as a Federal Reserve official.