Home
Market
Passengers on coronavirus-struck ship near San Francisco stuck in queasy limbo
Prev Article Next Article
This post was originally published on this sitehttps://i-invdn-com.akamaized.net/trkd-images/LYNXMPEG260P3_L.jpg 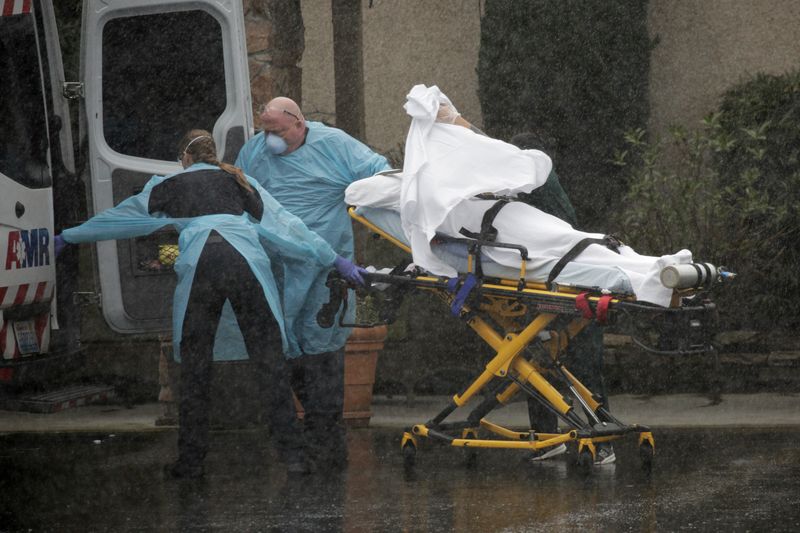 © Reuters. Medics transport a patient through heavy rain into an ambulance at Life Care Center of Kirkland

By Kevin Donnellan and Jonathan Allen

(Reuters) – Passengers on a cruise ship that was barred from docking in San Francisco after some aboard tested positive for the novel coronavirus did not know on Saturday when they might be able to step ashore.

As the outbreak takes root in the United States, President Donald Trump said on Friday he would prefer the Grand Princess’s 2,400 passengers and 1,100 crew remain out at sea, but that he would let others decide where she should dock.

More than half of all U.S. states have reported cases of the coronavirus, which originated in China last year and causes a sometimes deadly respiratory illness dubbed COVID-19.

After 19 crew and two passengers out of 46 tested on the Grand Princess were found to have the virus, Vice President Mike Pence said the ocean liner will be taken to an unspecified non-commercial port where everyone on board will be tested again, and that those “who need to be quarantined will be quarantined” and those who need medical care will receive it.

One passenger described a dull and sometimes queasy wait aboard the ship for news of when their limbo would end.

“It bugs me that my relatives in the Bay Area know what’s going to happen with us before I do,” Elizabeth Aleteanu of Colorado Springs said in an interview conducted via Facebook (NASDAQ:).

She turned 35 on Wednesday in a small, windowless cabin shared with her husband and two young children, where the rocking of the vessel sometimes left her nauseated.

“The cruise director and staff called my phone and sang happy birthday,” she wrote. “They delivered a princess notebook, birthday card, set of dominoes and a flower arrangement to my cabin. I’m not sure that we’re getting off today. It’s a big flower arrangement … makes me think we’ll be on board for a hot minute.”

The ship’s captain had addressed passengers earlier to say he did not know when they could dock, and that one guest who was critically ill on Friday was taken off the ship, Aleteanu said. The ship has increased its offering of television programs to help passengers pass the time, she said.

Pence, recently appointed by Trump to run the White House’s response to the coronavirus outbreak, told reporters in a briefing on Friday that all crew would likely remain quarantined aboard the vessel, whether or not they test positive.

It was unclear what was in store for passengers who showed no signs or symptoms of illness.

The predicament of the Grand Princess was reminiscent of the Diamond Princess cruise liner, also owned by Carnival (NYSE:) Corp, the world’s leading cruise operator. It was quarantined off Japan in February and was for a time the largest concentration of coronavirus cases outside China.

The respiratory illness has spread to more than 90 countries, killing more than 3,400 people and infecting more than 100,000 worldwide.

Washington’s King County has been the hardest hit area in the United States with at least a dozen of the nation’s 17 coronavirus deaths, several of whom were people living at a nursing facility in the Seattle suburb of Kirkland. Thirty health workers from the U.S. Public Health Service were due to arrive at the beleaguered LifeCare nursing home on Saturday. The first deaths on the East Coast were announced on Friday, with two people succumbing in Florida.

In New York, the number of confirmed cases jumped by 21 overnight to a statewide total of 76 people, 10 of whom have been hospitalized, Governor Andrew Cuomo said on Saturday. He issued a declaration of emergency.

“It allows expedited purchasing and expedited hiring, which is what we need right now,” Cuomo told a news conference.

The outbreak has begun to have substantial impacts on public life, with festivals and gatherings being canceled across the country.

The economic damage has also intensified and stock markets have continued to tumble. To mitigate against the virus spreading, some banks in New York are dividing their teams of traders between central locations and secondary sites in New Jersey and Connecticut, according to sources familiar with the matter.

Goldman Sachs Group Inc (NYSE:) had a scare this past week when an employee at its Lower Manhattan offices told the bank he had been at a temple service in a city suburb with a lawyer who later tested positive for the coronavirus. The bank said the employee was sent home and has been under self-quarantine since then “out of an abundance of caution.”

The employee, however, did not have contact with the lawyer at the service and has not shown any signs of illness, the bank said. He is expected to return to work next week when it would have been two weeks since he attended the service.

Goldman also cleaned the floor on which he worked at its headquarters. All floors remained operational, though Goldman let employees who felt uncomfortable work remotely, it said.

“We have no confirmed cases of employees who have contracted COVID-19 and all our buildings are fully operational,” the bank said.