Home
Stocks
Paul Brandus: Trump is scrambling to make sure the coronavirus isn’t his Katrina
Prev Article Next Article
This post was originally published on this site 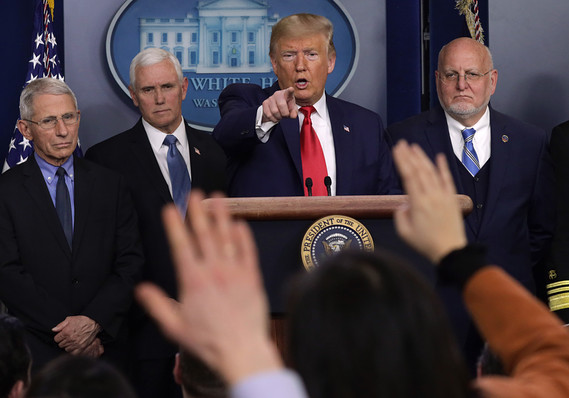 President Donald Trump hopes to convey his competence while flanked by the team in charge of the federal government’s response to the coronavirus outbreak.

George W. Bush was lucky that he was re-elected a year before Hurricane Katrina slammed into the Gulf Coast in 2005. The response — or at least the public perception of it — was bungled and reeked of bureaucratic incompetence.

Whether that’s fair to Bush or not—Katrina was a massive Category Five storm, after all—isn’t really the point. In politics, it’s all about how things are viewed by voters. He got hammered in the same way that many a mayor has been hammered, albeit on a lesser scale, for not clearing snow or fixing pot holes.

Politicians have to demonstrate that they’re on top of crises.

Read the latest news on the coronavirus.

That’s why Barack Obama traveled to the headquarters of the Federal Emergency Management Agency each spring for a briefing on the upcoming hurricane season, and it’s why he quickly appointed an Ebola czar to deal with that in 2014.

And it’s why Donald Trump has been all over the coronavirus like white on rice, coming into the White House briefing room twice since Friday to give briefings surrounded by health advisors and his own czar of sorts (he does like Russia, you know), Vice President Mike Pence.

Or at least that’s the perception he’s trying to convey.

Whether he will be ultimately successful at minimizing damage—in terms of lives lost and economic damage—remains to be seen. It isn’t helpful, for example, that Trump, in 2018, dismantled the government’s “entire pandemic response chain of command, including the White House management infrastructure,” notes Pulitzer Prize-winning science writer Laurie Garrett in Foreign Policy.

Tens of millions of Americans dislike President Trump, and I’m one of them. But we’re all in this together. I wish our president all the best in dealing with this crisis.

He is now under enormous pressure to prove that even after getting rid of the fire department, he can still put out the fire—and I hope he can. Country over politics—particularly during a dangerous crisis—is how it should always be.

What happens in April matters in November

Since I mentioned the importance of how things are perceived by voters, here’s what I find particularly interesting. In a presidential year, the second quarter—the April to June period — has historically been rather predictive in terms of who wins in November.

If Trump is perceived as being in command of the situation, that will seep into the minds of voters and will be hard to dislodge. The opposite is true if people perceive that he screwed up, if the coronavirus somehow became—fairly or not—“Trump’s Katrina.”

What could drive perceptions? A sharp rise in deaths, God forbid, and we must hope that this doesn’t happen. But the economic damage seems to be piling up fast, and is already taking a toll. Goldman Sachs strategist David Kostin, for example, says S&P 500 SPX, +1.07%  companies could see no profit growth this year if the coronavirus continues to spread.

This will further pressure the stock market, which Trump has closely tied his fortunes to.

We plunged into a correction last week (more than a 10% drop from market highs); if prices keep heading south and extend into bear market territory—a 20% drop—it’ll reflect negatively on the president.

Trump bragged and took credit when stocks were rising, so he’ll get the blame when they fall. Own it on the way up, you own it on the way down. Again, is this fair? It doesn’t matter. That’s how it’ll be perceived.

It could also pressure other key data points Trump has been quick to take credit for: the low unemployment rate and economic growth. The jobless rate — 3.6% in January — is spectacular, but if businesses start shutting down, who knows how many people will be thrown out of work and for how long?

This, like a like of dominoes, could cause additional troubles. Millions of Americans live paycheck to paycheck. The Federal Reserve estimates that nearly two-in-five Americans would struggle to come up with just $400 to cover an emergency expense. What happens if they’re thrown out of work and the rent’s due? Or they need baby formula?

There is also this: Americans are also being advised to just stay home if they feel ill. That’s fine if you have paid sick leave, but tens of millions of Americans don’t.

Since the president, to his credit, said over the weekend that worst-case scenarios should be considered, this is one of them: Millions of Americans tossed out of work with no savings to fall back on—or forced to work while sick (millions do this now of course, whenever they catch the common cold)

These are underlying issues that obviously predate our president and aren’t his fault. Even so, when people’s lives are disrupted for whatever the reason, presidents often get the blame. Again, is it fair? It doesn’t matter.

More on the coronavirus