Home
Stocks
Paul Brandus: We shouldn’t be surprised by black rage over injustice
Prev Article Next Article
This post was originally published on this site

If you think liberals and conservatives live in different worlds (they do), or the rich and poor do (of course they do), consider how different the universe is for blacks and whites.

Take the following story, which, if you’re white, I’ll bet is new to you: Ninety-nine years ago—May 31 and June 1. 1921 — white mobs in Tulsa, Okla., rampaged through the Greenwood section of their city. It was a prosperous neighborhood, so prosperous it was known as the “Black Wall Street.” Over a 24-hour period of vicious, racial hatred, some 35 city blocks were destroyed, including homes, churches, schools, businesses, even a hospital and library.

An estimated 300 people were killed in what remains perhaps the single-worst episode of racial violence in American history. “Not one of these criminal acts was then or ever has been prosecuted or punished by government at any level: municipal, county, state, or federal,” notes the Tulsa Historical Society.

The Tulsa Massacre is an event that even today is seared into the minds of most African-Americans.

Also read:Here’s why black families have struggled for decades to gain wealth

Our orientation is, and always has been, vastly different, as are the worlds we live in. Black Americans get the shaft from the very beginning: Neonatal care is worse. Schools are worse. Contaminated water—with all the health problems this conveys—is more likely to be found in “small, low-income and minority communities,” said a 2017 study by the Center for Public Integrity.

Health care itself is worse: “On average, says a study by the Commonwealth Fund, blacks “experience worse access to care, lower quality of care, and poorer health outcomes than the nation as a whole.”

White Americans, in their very different world, should not be surprised that blacks feel neglected, feel like second-class citizens, feel like they don’t have access to the same opportunities as whites.

I’d be resentful too, if I were born in a country that called itself “exceptional,” yet is unable to build decent hospitals and schools for my family. Wouldn’t you?

I’d be resentful, too, if I saw millionaires and billionaires always getting big tax cuts — while averting their gaze as my children drank tainted water. Wouldn’t you?

This is what George W. Bush meant, as a presidential candidate two decades ago, when he said in a speech to the NAACP that “discrimination is still a reality, even when it takes different forms. Instead of Jim Crow, there’s racial red-lining and profiling. Instead of separate but equal, there is separate and forgotten.” It was time, he said, to confront “the soft bigotry of low expectations.”

Here’s soft bigotry in action: Studies show that companies are less likely to invite candidates for a job interview if they have black-sounding names on their résumé.

Even if a black man or woman can find a job, they tend to suffer from what some economists call a “first fired, last hired” phenomenon. Little wonder then, that blacks are less likely to build wealth, accumulate new skills, and move up the ladder over the years. They’re also less likely to make it to the corporate boardroom. 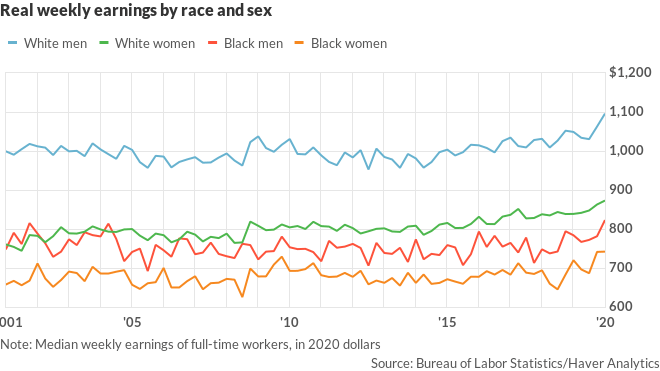 The pay gap between black and white workers is as wide as ever.

In 2017, three researchers at the San Francisco Fed wrote that the pay gap between black and white workers is increasingly the result of biases like these — factors that are hard to capture in data.

“Factors that are harder to measure — such as discrimination, differences in school quality or differences in career opportunities — are likely to be playing a role,” the study said.

Of course, not all bigotry is “soft,” as the death of George Floyd — suffocated by a cop’s knee to the neck — shows. But it’s symbolic in all its televised and pitiless gruesomeness of the lifelong repression, mistreatment and negligence that black Americans too often experience.

The turmoil we’re seeing in cities from coast-to-coast has left millions of Americans shocked. Perhaps more shocking however, is that we continue to permit the underlying circumstances that fuel such rage to fester—year after year, decade after decade.

Until we find a way to do better, I don’t think we have any business labeling America an “exceptional nation.”