Home
Stocks
Peter Morici: Trump’s campaign may be banking too much on a strong economy
Prev Article Next Article
This post was originally published on this site 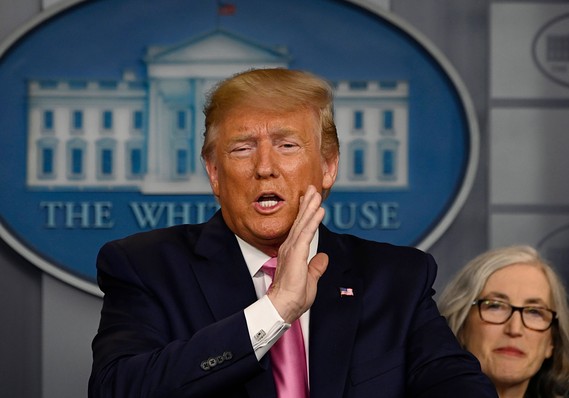 President Donald Trump says the coronavirus in under control and the economy will be fine.

The Trump administration entered 2020 confident a strong economy could carry the president to re-election.

Government officials, business leaders and academics participating in Davos and the Fed’s annual conclave at Jackson Hole appeared convinced that President Donald Trump’s trade wars and Britain’s indecision regarding Brexit were the principal threats to sustaining the economic expansion.

However, the phase one trade deal with China and Boris Johnson’s masterful ascent, along with corporate tax cuts and deregulation, had the administration and the IMF expecting good times to continue.

All this optimism ignored increasingly tough structural challenges and creeping decadence in the thinking of policy makers and the economics profession.

Even before the coronavirus, China’s growth was slowing under the weight of too much debt from wasteful state-directed investment and real estate development. Now the epidemic has made plain the economic costs of diverting government funds to the military and efforts to pirate Western technology from badly needed public investments like hospitals.

Now, the contagion will likely cut China’s first-half growth in half. And take Europe closer to a zero-growth situation.

The EU’s largest economies are in a permanent funk. Manufacturing is one quarter of Germany’s prosperity and terribly dependent on gas-powered automobiles, Italy is in perpetual political dysfunction and both have chronically troubled banks. No one can govern France.

Boeing’s BA, -4.40%  737 Max production shutdown will knock a combined half a point off U.S. growth spread across the first and second quarters. Experience with SARS and China’s enlarged role in global supply chains indicates a 3 percentage point reduction in Chinese growth from the coronavirus could reduce U.S. growth by 0.5 percentage points spread across two quarters.

The U.S. economy could expand as little as 1.3% in the first quarter and 1.7% in the second quarter instead of 2% percent or so previously expected. Given that some sectors like health care grow no matter what, that implies others could dip into recession — read autos and restaurants.

An aging global population is saving a larger share of income, and money looking for yield is moving into real estate in global cities like New York, London and Vancouver —creating the danger for another bubble then bust. Those additional savings are a significant drag on demand for goods and services in all the major economies, and that requires much bigger government deficits to make up the difference than are in the cards.

The bottom line is we are one more big shock away from a global recession.

Phase-two discussions on China’s predatory industrial policies won’t yield much and that will confront Trump with a choice between re-election popularity and new tough measures. After the election, all bets on restraint go off.

Until December, trade across the English Channel continues as before Brexit but the European Union is demanding that the U.K. follow Brussels’s standards on environmental and social regulations, subsidies and taxes for a permanent free-trade deal. That defeats London’s purposes in leaving and prospects for a hard break will increasingly come into focus as the year progresses.

Beijing could decide protecting its population from diseases is more important than a bigger navy and industrial espionage. And spend a lot more on hospitals, schools and other urgently needed social investments but don’t bet on it.

The Fed is searching for new tools—perhaps.

One debate is about whether to set ceilings for longer-term Treasury rates instead of a target for how many bonds it purchases. As the Fed must buy bonds to hit its target, that is operationally the same.

As the impeachment process demonstrated, lawyers are good at circular reasoning—and these days a lawyer also runs the Fed.

Ben Bernanke and economists who advise Chairman Jerome Powell believe a publicly stated commitment to keep interest rates below a ceiling until the economy hits specific goals could deliver the equivalent of a 3 percentage point interest rate cut. In a recession, the Fed must find a stimulus tool that powerful, because it does not want to cut the federal funds rate—now about 1.6% —below zero.

Folly heaped on folly—does anyone really believe the Fed would raise rates in a crisis?

Either major governments—including the stubborn Germans—spend a lot more, or the Western economies are stuck between lethargic growth and recession for the indefinite future.