Home
Stocks
Peter Morici: Watch out: inflation could be lurking on the other side of the pandemic
Prev Article Next Article
This post was originally published on this site 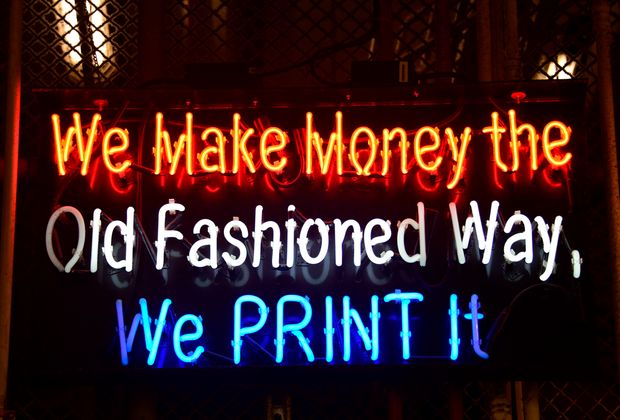 A sign at the U..S Bureau of Engraving and Printing in Washington.

Congress has authorized $3.3 trillion in new spending since March and with the COVID-19 crisis lasting much longer than initially anticipated, another package in the $2 trillion range could emerge.

Conservatives fret that skyrocketing interest payments on the national debt will cripple the nation’s finances and federal borrowing will crowd out funds for private investment, but inflation may prove the bigger problem.

When the Treasury sells bonds, it may drive up interest rates but how much depends on foreign and domestic investor appetite for U.S. securities and Federal Reserve policy.

These days private demand should be large and elastic. An aging population is driving up global savings and prospects for developing country debt defaults are rising—both should drive foreign investors into Treasuries and other American securities.

To cope with COVID-19 uncertainties, corporations are bulking up on liquidity and private investors have added about $1 trillion to their cash hoards in very low-interest-bearing money-market accounts.

Also, the net impact of emergency spending on debt actually held by the public will be less than $3.3 trillion, because some of the stimulus is loans that will be repaid and more spending will boost GDP and tax revenues.

The Federal Reserve has increased its holdings of Treasuries and other assets by about $2.7 trillion by printing money. Nearly all the interest the Fed earns on those assets will be remitted to the Treasury, so the net effect on interest paid by Uncle Sam to private investors is manageable.

Altogether, the private and Fed appetites for Treasuries are keeping interest rates low, which nullifies any concerns about crowding out private investment.

Financial talking heads like to repeat Milton Freidman’s admonition that inflation is always a monetary phenomenon but that is not quite the same thing as saying more money always causes higher inflation.

Increasing the money supply must result in either more goods produced or higher prices. If unemployment and underused capital are low, inflation will result but underused capacity appears generally abundant.

In June, consumer prices were up only 0.6% from a year ago. Even subtracting energy, which has been pulled down by the price war in oil and slack demand, prices were up 1.7%.

General excess capacity at a time of severe adjustments in how consumers spend their money doesn’t necessarily preclude inflation owing to the new costs imposed by social distancing and pockets of surging demand.

After the crisis, Americans still will be eating at home more, and prices at limited service restaurants are rising. Sit-down restaurants operating even at Phase 3 levels will have to bear more overhead and charge more to keep staff and diners safe while serving fewer customers.

Theaters and sporting events, where they are open, and domestic cleaning services are already charging more.

Grocery prices have jumped—supermarkets and restaurants have different suppliers and requirements for items like meat, milk, eggs and vegetables. The shift to more meals at home has stressed supply chains.

Folks will be flying less but Zooming more. Planes at two-thirds capacity will require higher fares or airlines will take another trip through bankruptcy.

According to the New York Federal Reserve Bank survey, consumers expect inflation to rise to 2.7% over the next year, and investors are demanding higher premiums on ordinary Treasuries over inflation-protected bonds.

Another round of stimulus may be coming—for example, focused on extending supplemental federal unemployment benefits, assistance to the states and aid to industries particularly impacted by COVID-19. United Airlines UAL, -1.05% is planning substantial layoffs when its federal assistance to airlines run out at the end of September.

The Federal Reserve does not have to accommodate another few trillion in spending by buying so many bonds and printing money. It could keep its target overnight bank borrowing rate near zero but permit the yields on 10-year Treasuries TMUBMUSD10Y, 0.571% to rise to about 1% without doing much harm to lending for new homes sales and business investment.

Without more discipline at the Fed, inflation could easily get out of control.

Peter Morici is an economist and business professor at the University of Maryland.