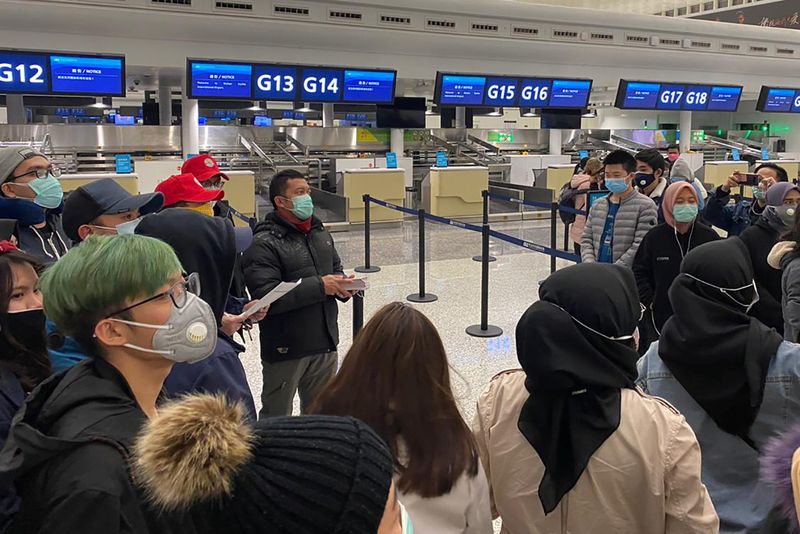 BEIJING/MANILA (Reuters) – The Philippines on Sunday reported the growing epidemic of a coronavirus has claimed its first fatality outside of China, where new confirmed infections jumped by a daily record to top 14,000 cases.

The Philippines Department of Health said a 44-year-old man from Wuhan city in central Hubei province, the epicentre of the outbreak, had died in a Manila hospital after developing severe pneumonia.

It was the first death out of more than 130 cases reported in around two dozen countries and regions outside of mainland China.

The man who died was a companion of a 38-year-old Chinese woman, also from Wuhan, who was the first and only other person to test positive for the virus in the Philippines. Both patients arrived in the Philippines via Hong Kong on Jan. 21.

China’s death toll from the outbreak reached 304 as of the end of Saturday, state broadcaster CCTV said on Sunday, citing the country’s National Health Commission.

China’s central bank has promised to provide monetary and credit support to companies struggling due to the virus. It said it will inject a hefty 1.2 trillion yuan ($173.8 billion) worth of liquidity into the markets via reverse repo operations on Monday as the country prepares to reopen its stock markets after an extended Lunar New Year holiday.

China Evergrande Group, the nation’s third-largest property developer, said in an internal note on Sunday it would extend its Lunar New Year holiday to Feb. 16, and suspend construction work at all of its 1,246 sites until Feb. 20.

Also on Sunday, state media reported that construction of one of two hospitals in Wuhan dedicated to treating coronavirus patients has been completed. Huoshenshan, a hospital with 1,000 beds, was built in eight days and can receive patients from Monday, state media said.

The World Health Organization on Thursday declared the outbreak a public health emergency of international concern, but said global trade and travel restrictions are not needed.

However, some countries are responding to fears of the virus spreading by ramping up border controls. Singapore and the United States announced measures on Friday to ban foreign nationals who have recently been to China from entering their territories, and Australia followed suit on Saturday.

The Philippines expanded its travel ban to include all foreigners coming from China, widening an earlier restriction that covered only those from Hubei province.

New Zealand and Vietnam also barred foreigners who have been in China, with Vietnam saying it would halt all flights to and from China.

Taiwan has asked its diplomats to talk to governments where Taiwanese airlines fly to ensure flights are not cut off due the island’s inclusion by the WHO as part of China.

More than 100 Germans and family members landed in Frankfurt on Saturday after being evacuated from Wuhan. Around 250 Indonesians were also evacuated from Hubei.

China will start making arrangements to fly back to Taiwan the first 200 Taiwanese who have been stranded in Hubei, Chinese state media reported on Sunday. China said about 500 Taiwanese are in the province.

Japan plans to send another chartered plane mid-week or later to bring back Japanese nationals who are still in Hubei, its foreign ministry said on Sunday.

Japan also confirmed an additional three cases of the new coronavirus among an earlier batch of evacuees, including one who initially tested negative, the health ministry said, bringing the country’s total to 20 cases.

Japan has barred foreigners who have been in Hubei from entering the country, a move followed on Sunday by South Korea where the entry ban will go into effect on Tuesday, South Korean Prime Minister Chung Sye-kyun said.

Hubei has been under virtual quarantine for the last week, with roads sealed off and public transport shut down. The province extended its Lunar New Year holiday break to Feb. 13 in a bid to contain the outbreak.

The number of deaths in Hubei from the outbreak had risen to 294 as of the end of Feb. 1, with a total of 9,074 cases, the majority in the capital city Wuhan, where the virus is thought to have emerged late last year in a market illegally trading wildlife.

New confirmed cases also surged by 276 in nearby Huanggang. One death was reported in the city, about 60 km (37 miles) east of Wuhan.