Home
Stocks
Project Syndicate: Biden should make Trump’s demagoguery the campaign issue of Election 2020
Prev Article Next Article
This post was originally published on this site 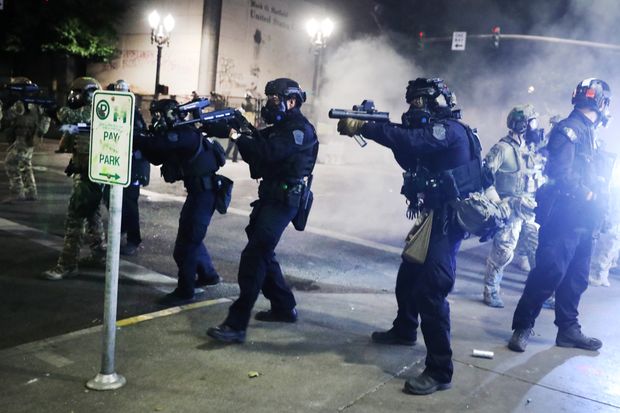 CHICAGO (Project Syndicate) — With Joe Biden’s lead in the polls, many Democrats and Republican Never-Trumpers are increasingly optimistic that President Donald Trump will lose in November.

“ Trump clearly expects to benefit from the chaotic confrontations between police and protesters in America’s big cities. ”

For liberals, a dominant view is that, thanks to Trump’s mishandling of the COVID-19 pandemic and the economic crisis it unleashed, Republican and Trump-leaning independent voters are coming to their senses.

But this is a sunny reading of events. Trump won the election in 2016 by converting his professional and temperamental unfitness for the presidency into a political virtue. Defiance of the establishment gave Trump credibility among Republican voters, who believed that mainstream politicians ignored their interests.

Trump solidified his support by stoking fears that immigrants were overrunning the country and threatening the dominance of white Americans. He offered himself as a savior. That was enough.

As illegal immigration has receded from the public imagination, Trump has sought new ways to capitalize on voters’ fears. He believes he has found it in the specter of urban criminality.

Trump clearly expects to benefit from the chaotic confrontations between police and protesters in America’s big cities. No matter that most Americans sympathize with Black Lives Matter: if voters believe that crime and disorder will rise (as it has in places like Chicago) and that riots will erupt, their fears will take precedence over ideals of social justice.

Fearful people seek protection from powerful authority figures. No authority figure is more powerful than the sitting president of the United States, who oversees massive security resources. This is why so many observers worry that Trump’s motive in sending federal paramilitary forces into U.S. cities was not to deter violence, but to provoke it.

As with illegal immigration, Trump has tried to tie peoples’ fear for their safety with broader anxiety about cultural change. Just as Trump depicted illegal immigrants as criminals and threats to traditional American values, he portrays protesters as rioters and threats to American culture and history. They are not just lobbing Molotov cocktails; they are tearing down America’s heroes.

The liberal media believes or hopes that Americans see through Trump’s strategy, and blame the violence on him, not on the protesters. Maybe. But Trump is following in the footsteps of Richard Nixon, Ronald Reagan, and George H.W. Bush, all of whom provoked or exploited fears of urban crime and social decay on their way to the presidency.

Imagine it is October. Americans have forgotten about Trump’s mishandling of the COVID-19 pandemic, which is subsiding as vaccines come to market or mask wearing and social distancing take hold and finally work. They are not terribly interested in Biden’s promises to improve health care, address racial injustices, build infrastructure, or repair America’s relationships with allies. They are worried about soaring crime rates, never-ending protests, and what they see as attacks from the left on traditional values and institutions. They trust Trump to tackle crime, and believe his warning that “Sleepy Joe” will disregard their fears.

In this scenario, Biden can choose among three responses. He could take the high road and point out that crime remains low by historical standards and is a local, not a federal, matter. He could argue that it is caused by childhood adversity that only well-designed federal social programs and police reforms can address. And he might also note that far more people in the U.S. have died as a result of Trump’s bungled COVID-19 response than die from homicide in a typical year.

But, against a demagogue like Trump, the high road is a certain path to defeat. Fearful voters will not be satisfied by better statistical analysis or policy reforms that address the threat only indirectly.

The low road would involve a left or center-left style of demagoguery. Here, the goal is not to counter people’s fear of crime but to redirect their fear to something else. Biden could try to stir up fear of the police, or of a police state helmed by Trump and manned by thuggish federal paramilitaries. Or he could follow the lead of classic populists from Huey Long to Hugo Chávez, and attack the rich and the corporate boogeyman as the source of all problems.

Biden can do neither. His decency works against him: an appeal to voters’ primal fears will lack credibility. Nor would these tactics work. Few Americans want to defund the police—as Biden has already recognized. And Biden is too much a creature of the establishment to plausibly attack the rich.

Fortunately, Biden has a better strategy: to make Trump’s demagoguery a theme of his campaign.

The lesson of Joe McCarthy

The last major American demagogue was Sen. Joseph McCarthy, who held sway over U.S. politics from 1950 to 1954. McCarthy gained power by harping on the political establishment’s alleged failure to oppose the Soviet threat and Communist influence.

McCarthy, like Trump, built on a real if thin empirical record. Communist efforts to subvert the U.S. government had been stopped by World War II’s end. Drawing on public anxiety about Soviet expansionism, McCarthy inflated the threat with false accusations and manipulation of the press.

Yet McCarthy fell as quickly as he rose (he was censured by the Senate in 1954 and died in drunken obscurity in 1957). Perhaps Americans tired of his antics: none of his accusations led to a criminal conviction for espionage, undermining his credibility. Or perhaps he overreached by attacking the U.S. Army, which enjoyed more trust among Americans than did his earlier targets, which included the State Department and Hollywood.

The end came when McCarthy was called to account by Army lawyer Joseph Welch, who attacked the senator during a televised hearing for engaging in character assassination against one of Welch’s colleagues. “Have you no sense of decency, sir? At long last, have you left no sense of decency?” he famously demanded of McCarthy, to the applause of spectators.

McCarthy’s fate offers a glimmer of hope for Biden. Perhaps the American public can tolerate no more than four years of demagoguery. Many Trump voters do seem to have gotten the message that he has little to offer them except entertainment, and even that has been diminished by familiarity with Trump’s shtick.

And Trump, like McCarthy, may have overreached when he challenged the army: by threatening to deploy military personnel to American cities, Trump breached a norm that separates the military from politics. If Trump again tries to embroil the army in domestic politics—he’s backed off for now—Biden should call him to account for corrupting a respected institution.

But Biden’s best strategy would be to draw voters’ attention to the ways Trump has manipulated them.

Trump, like McCarthy, has exploited divisions between Americans, corrupted public debate with his lies and insults, and attacked valuable institutions, including the FBI and the Centers for Disease Control and Prevention, which Americans depend on. “Have you no sense of decency, Mr. Trump?” Biden should ask. The question answers itself.

Eric Posner, professor at the University of Chicago Law School, is the author, most recently, of “The Demagogue’s Playbook: The Battle for American Democracy from the Founders to Trump. “

This article was published with permission of Project Syndicate — Avoiding the Trump Trap.

With Biden’s VP choice expected this week, here’s whom he could pick