Home
Stocks
Project Syndicate: China bullies the world to look the other way on human-rights abuses
Prev Article Next Article
This post was originally published on this site 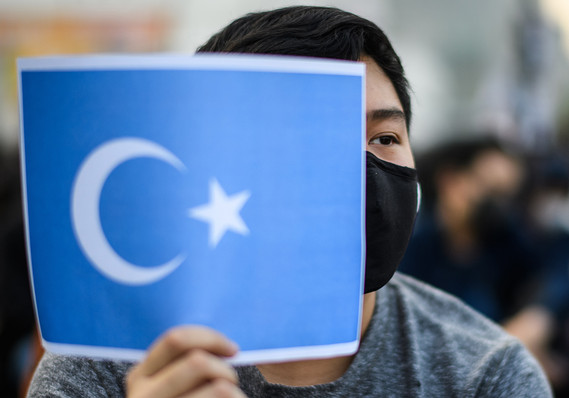 A man holds the East Turkestan flag during a rally in Hong Kong on Dec. 22, 2019, to show support for the Uighur minority

NEW YORK (Project Syndicate) —To those who follow international affairs, it is clear that China has become increasingly repressive under President Xi Jinping. Over the past eight years, electronic surveillance in China has become more pervasive, intolerance for freedom of expression has grown, and many lawyers have been disbarred or imprisoned simply for defending their clients’ rights.

Moreover, Xi has eliminated the two-term limit on the presidency, withdrawn protections for civil liberties in Hong Kong, and overseen the detention and forcible re-education of hundreds of thousands of Uighurs and other Muslims in Xinjiang province.

Much of this has been reported in the world’s press. What is less well known is that China is using its immense economic power and international clout to undermine human-rights protections at the global level, too.

To be sure, China has long relied on its economic strength to head off international condemnation of its human-rights record. Because so many countries fear antagonizing China, they have refused to sign on to resolutions criticizing it at the United Nations Human Rights Council.

Likewise, after sentencing the dissident writer Liu Xiaobo to 11 years in prison in 2009 (for the offense of collecting signatures on a petition for rights), the Chinese government grew worried that Liu would be awarded the Nobel Peace Prize. So, it threatened Norway, the home of the prize, with economic reprisals.

In this case, however, China’s efforts failed: Liu received the prize in 2010. Having carefully managed its income from the sale of North Sea oil, Norway has the world’s largest sovereign wealth fund and is not particularly susceptible to economic strong-arming. But, more important, Norway does not do much business with China, leaving it well positioned to withstand the pressure campaign (which largely involved purchases of Norwegian salmon).

Nonetheless, according to Human Rights Watch’s newly released World Report 2020, China has since stepped up its efforts, and is no longer content merely to avert criticism of its own human-rights record. “At the U.N. Human Rights Council,” notes HRW Executive Director Kenneth Roth, “China routinely opposes virtually every human rights initiative that criticizes a particular country unless it is watered down enough to secure that government’s consent.”

Over to its side

In this way, China has managed to bring many other governments over to its side. “In recent years,” Roth explains, “China has opposed resolutions condemning human rights violations in Myanmar, Syria, Iran, the Philippines, Burundi, Venezuela, Nicaragua, Yemen, Eritrea, and Belarus.”

In the case of Myanmar, for example, “Beijing has been clear that it will not tolerate pressure on Myanmar, despite a U.N. fact-finding mission’s conclusion that Myanmar’s top military leaders should be investigated and prosecuted for genocide” against the country’s Rohingya minority. Perversely, although Islamophobia has been a key factor in the persecution of the Rohingya, China’s broader stand on human rights has also helped many predominantly Muslim countries avoid censure for their own abuses.

Making matters worse, Roth shows that China’s ability to silence other governments extends even to those that have positioned themselves as champions of human rights.

“French President Emmanuel Macron visited China in November 2019 but made no public mention of human rights,” Roth writes. “Visiting leaders have typically excused such public silence by insisting that they raise human rights with Chinese officials in private discussions. But little if any evidence exists that this behind-the-scenes approach does any good.”

The case of the United States is somewhat more complicated. In October 2019, President Donald Trump’s administration, to its credit, imposed sanctions on the Xinjiang Public Security Bureau for its abuses against the Uighurs, and on several Chinese technology companies for their involvement in human-rights violations. And some administration officials have openly denounced Chinese human-rights practices.

The problem is that the administration’s own dismal human-rights record — from the travel ban targeting Muslims to the separation and caging of migrant families at the border — has significantly undermined its credibility.

Trump can scarcely condemn China for its human-rights record when he publicly praises strongmen and dictators, from North Korea’s Kim Jong-un to Russian President Vladimir Putin and Xi himself.

Meanwhile, China has extended its assault beyond governments to target private institutions, too. Last year, for example, it suspended a lucrative broadcast agreement with the U.S. National Basketball Association in retaliation for one team manager’s tweets in support of the protesters in Hong Kong.

Given that Xi has made it even more dangerous for Chinese citizens to express concerns about human rights, it is all the more important that external voices not be silenced. All those who care about human rights must stand up to China’s expanding pressure campaign.

To that end, the HRW report offers a set of recommendations for confronting China’s challenge to the international human-rights system; most involve greater forthrightness and outspokenness.

Public exposure, after all, is almost always the best way to counter gross rights violations. The worst abuses of the 20th century — including the Armenian genocide, Stalin’s gulag, the Nazi death camps, Mao’s “great leap forward,” and the Cambodian killing fields — were largely hidden from the world until after the fact.

Exposing and denouncing them while they were underway would have been the best means of mitigating the horrors. The same is true of China’s abuses today.

Aryeh Neier, president emeritus of the Open Society Foundations and a founder of Human Rights Watch, is author of “The International Human Rights Movement: A History.”

This article was published with permission of Project Syndicate — China’s Global Human-Rights Whitewash.