BEIJING — It’s not the most attractive time to think about taking up permanent residence in China. The country is the cradle of our emerging pandemic, its cities remain choked in smog, and its public sphere faces its tightest restrictions on expression in years.

Not to mention the stagnating economy, which even before the coronavirus was growing at its slowest rate in decades.

But that may be just why Beijing has chosen now to propose loosening requirements for foreigners to put down roots in the country.

In fact, the new legislation — unfurled in draft form last week and available for public input for the rest of the month — specifically aims to attract a certain type of foreign resident: one with money or expertise or both.

The rollout is notable for a few reasons. For one, China has been infamously stingy in granting the equivalent of an American “green card” to foreigners. Many who have lived here for years, even with a Chinese spouse and children, have applied and reapplied with no luck. In 2018, China’s State Administration of Foreign Experts Affairs said nabbing one was “considered one of the most difficult tasks in the world.”

The data back that up. The country gave out a mere 1,576 such permits in 2016, the last year for which numbers are public. By contrast, the United States grants over 1 million “green cards” each year.

And while the proposed changes largely represent adjustments that have been ongoing for years, Beijing’s broadcasting of the revisions last week, and its request for public comment, were seen as a sign that it was finally going to open the spigot. That was, until the issue blew up online. 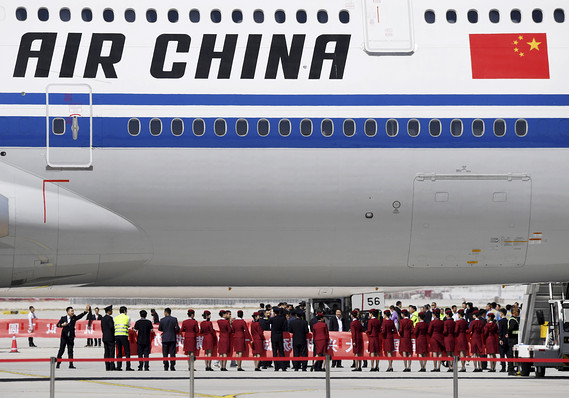 Crew members gather near an Air China jet during an event at the Beijing Daxing International Airport last year.

“Our family just got permanent residence in China,” wrote Jana Rodriguez Hertz, a professor of mathematics at the Southern University of Science and Technology, in Shenzhen, China. “I was pretty happy about this, since I love China and I have very good friends here. However, some recent news showed me that perhaps we are not so welcome here.”

That “recent news” was a flood of racist and xenophobic comments on Chinese social-media sites since the proposal was announced.

As occurs in comments sections around the world, Chinese online forums can become a cesspool of insults and hate, and a perusal of some of the 3 million comments on the Twitter-like Weibo was no exception.

Common refrains: that foreigners were treated too generously in China, that Chinese women would be taken by foreign men, and that the country would become like a “second Europe” in which immigrants rush in and consume resources.

Though the hashtag for the topic is still running online, the Ministry of Justice shuttered the comments section on its original post.

“You asked for our opinion, then you closed down the comments,” wrote the popular Chinese blog account History Can Be Seen, which has nearly 1 million followers.

As China has become more and more prosperous, however, a newer complaint has emerged in its immigration debate. Many users said the move would allow wealthy Chinese to change citizenship and then move back to the country and enjoy the “superprivileges” that some feel foreigners are afforded.

“A ‘foreigner’ isn’t just foreigner,” said Weibo user Mizang Susu. “It includes Chinese who’ve renounced their citizenship. If this bill goes through, rich people will move their property from China then come back, live in China as a foreigner, and on top of that receive ‘overtreatment.’ ”

Sun Peng, a teacher in Beijing, said she supports allowing in more foreigners, even if she finds it “annoying” that rich Chinese might game the system.

“I’ll take that trade-off,” Sun said. “It’ll bring us more engagement with the rest of the world.”