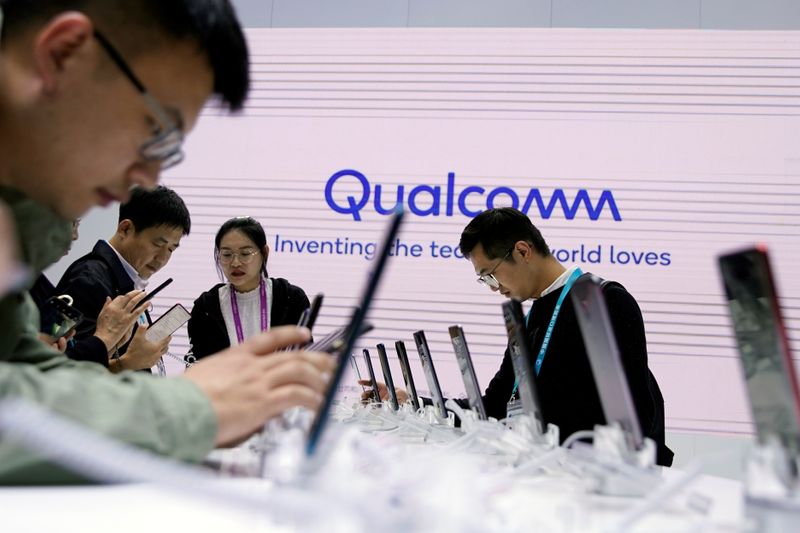 © Reuters. A Qualcomm sign is seen at the second China International Import Expo (CIIE) in Shanghai

By Stephen Nellis and Munsif Vengattil

(Reuters) – Chip maker Qualcomm Inc (O:) said on Wednesday that the coronavirus outbreak in China poses a potential threat to the mobile phone industry, with a possible impact on manufacturing and sales.

The comments by Qualcomm, the world’s biggest supplier of “modem” chips that connect mobile phones and other devices to wireless data networks, dragged down chip stock shares despite signs that an industry downturn was ending.

Qualcomm’s chief financial officer, Akash Palkhiwala, on a conference call with investors following the release of quarterly results, said the company expects “significant uncertainty around the impact from the coronavirus on handset demand and supply chain.”

Qualcomm shares fell as much as 3.75% in after-hours trade.

The San Diego-based chip supplier forecast revenue for its fiscal second quarter largely above Wall Street estimates, in the latest sign that the protracted slowdown in the global chip industry is easing.

The forecast was wider than usual because of the outbreak in China, which has killed hundreds and sparked fears around the world. The company lowered the bottom end of its earnings-per-share guidance by 5 cents to account for possible disruptions, Palkhiwala said.

On the conference call, Qualcomm officials tried to calm analyst concerns over the virus, saying that the biggest 5G markets this year are expected to be in the United States, Korea and Japan, and that the company could weather disruptions.

“If we have an issue, a supply chain issue or demand issue in China, we tend to have the ability to have other regions to back it up,” Chief Executive Steve Mollenkopf said. “So we tend to look at the business in terms of our planning. We want to make sure that we maintain that strength across different markets.”

While it is dominant in mobile modems and processors, Qualcomm has been pushing to win over customers with the kind of chip called a radio-frequency front end that is more complex in phones that use 5G. Even though it forecast fewer modem sales than Wall Street expected, it generated more revenue per modem shipped than in the past.

In an interview, Mollenkopf said the company’s forecast reflected strong demand for radiofrequency chips from phone makers, especially in China, where brands are putting 5G capabilities into cheaper devices that will sell in greater quantities sooner than Qualcomm had originally anticipated.

“It’s really the first time that you’re seeing that significantly in our numbers,” Mollenkopf said.

Qualcomm left its estimate of the number of 5G mobile handsets that will be sold in 2020 unchanged at between 175 million and 225 million.

Qualcomm forecast total revenue in the range of between $4.9 billion and $5.7 billion for its second quarter, the mid-point of which is largely above analysts’ average estimate of $5.08 billion, according to IBES data from Refinitiv.

It forecast revenue for its chip segment of $3.9 billion to $4.5 billion, versus estimates of $3.8 billion, according to Refinitiv data.

Qualcomm, which generates most of its profits by licensing its technology to mobile phone makers and others, said the segment reported revenue of $1.4 billion in the fiscal first quarter ended Dec. 29, in line with estimates of $1.41 billion, according to FactSet. On the conference call, Qualcomm said it has signed 85 license agreements for 5G technology, up from 75 in November.