Home
Stocks
Rex Nutting: Who knows more about economics: Steven Mnuchin or Greta Thunberg?
Prev Article Next Article
This post was originally published on this site 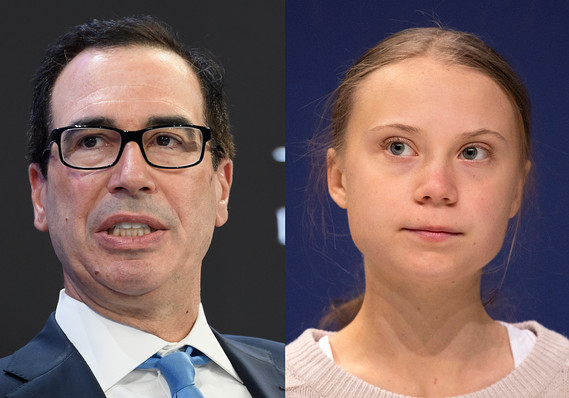 Treasury Secretary Steven Mnuchin got the economics all wrong in his public put-down of climate activist Greta Thunberg.

A guy who still insists that the 2017 tax cut “will pay for itself” should not be lecturing anyone about economics, but there’s something about being in Davos that brings out the arrogance in people who think money and power confer wisdom.

Just a couple of days after he doubled down on his claim — without evidence or reason — that the Republican tax overhaul would start working any day now to boost the economy’s growth potential and flood the Treasury with tax revenue, Treasury Secretary Steven Mnuchin had the gall to patronize teen-age climate activist Greta Thunberg over the demand she and others made that the world immediately stop using, subsidizing and investing in the fossil fuels that are endangering humanity with catastrophic climate change.

“The facts are clear, but they’re still too uncomfortable for you to address,” Thunberg told world leaders at Davos. “You just leave it because you think it’s too depressing and people will give up. But people will not give up. You are the ones who are giving up.”

Ideally you’d like to be more than 95% certain that our civilization can survive what we’re spewing into the atmosphere.

“After she goes and studies economics in college, she can come back and explain that to us,” Mnuchin sneered to reporters covering the annual World Economic Forum in the Swiss resort.

I suppose that if Mnuchin were answering the 911 phones, he’d demand an advanced degree in chemistry from anyone reporting a fire before he would dispatch the first responders.

Mnuchin’s dismissive comments about climate change came less than a week after the Ninth Circuit Court of Appeals ruled that the federal government’s role in actively promoting fossil fuels could hasten “an environmental apocalypse.” The court said the federal government had not disputed the facts.

Accordingly, the court agreed with the 21 young plaintiffs in Juliana v. United States that the climate crisis is “approaching a point of no return,” but ruled that the courts had no authority to force the Congress or the executive branch to act to save the nation or the planet.

‘The government bluntly insists that it has the absolute and unreviewable power to destroy the Nation.’

Unlike the 17-year-old Thunberg, Mnuchin does have a degree in economics, a Yale bachelor of arts, but he doesn’t appear to have learned much. If the study of economics teaches us anything, it’s that we should be humble about what we can know for sure, especially about the future. Too few have let that lesson soak in.

Remember, most of the people who hold economics degrees told us that nothing bad could possibly occur if we let tens of millions of people use their homes as ATMs during the first decade of the millennium. How many trillions of dollars did that miscalculation cost the global economy?

Like weather forecasting, economics deals in probabilities rather than certainties. Most predictions come with a high level of uncertainty, perhaps a 5% or 10% chance of being wrong. That’s good enough for some purposes, but ideally you’d like to be more than 95% certain that our civilization can survive what we’re spewing into the atmosphere.

When it comes to his rejection of the predictions of the Congressional Budget Office and those of most other economists that the tax cut will probably not pay for itself, Mnuchin clings to the small probability that they are wrong. When it comes to the economic and budgetary impact of cutting taxes, Mnuchin is betting on the occurrence of a black-swan event in the form of a productivity miracle.

Likewise, Mnuchin and other climate deniers in the Trump administration are clinging to the possibility that the climate-change models constructed by scientists are too pessimistic, and that the temperature of the Earth will not climb as much as projected. Once again, Mnuchin hopes for a black swan — a benign physical response to the addition of more greenhouse gases into the atmosphere.

But when it comes to predictions about the economic cost of climate change, Mnuchin takes the other side of the bet. He goes all in on the gamble that the social and economic costs will be manageable, that the smart thing for humanity is to keep burning fossil fuels like crazy for a few more decades because the cost of acting now to curb CO2 emissions would probably be higher than the benefits to future generations of a cooler planet.

But what if those models are wrong? What if they are too optimistic? What if there is a 5% or 1% or 0.1% or 0.001% chance that the higher temperatures we are baking into the cake will be much more costly to future generations than we suppose?

Do you feel lucky?

What if there’s a tipping point beyond which our economy and our civilization cannot function? How certain are you that some future humans will act in time to avert a calamity? Do you feel lucky, punk?

My gap year ends in August, but it doesn’t take a college degree in economics to realise that our remaining 1,5° carbon budget and ongoing fossil fuel subsidies and investments don’t add up. 1/3 pic.twitter.com/1virpuOyYG

A society can adjust — with a cost — to an increase in the average daily high temperature from 90 degrees to 105 degrees, but could anyone live or work in a climate where the temperatures regularly hit 130 degrees?

Climate-change deniers often evoke the uncertainty of these scientific models as if it’s reason to do nothing. In fact, the uncertainty is a reason to do more, to buy a little insurance to guarantee that our children, grandchildren and generations yet unborn will live in a peaceable, prosperous world instead of a living hell.

I agree with Greta Thunberg: We should act as if we love our children. I don’t pretend to know how hot it will get, or what the cost of adjusting to it will be. But I do know that we don’t have the right to gamble with their lives, not when the probable cost of moving completely away from fossil fuels is manageable.

It’s time for Steve Mnuchin and the rest of the climate deniers to learn some basic economics that fully accounts for all the costs — private and social — of burning carbon without limit. BlackRock knows.

Inaction shouldn’t be an option. As federal appeals court Judge Josephine L. Staton wrote in her powerful dissent in the Juliana case: “It is as if an asteroid were barreling toward Earth and the government decided to shut down our only defenses. The government bluntly insists that it has the absolute and unreviewable power to destroy the Nation. My colleagues throw up their hands.”

Greta Thunberg may not have a Ph.D., or a job on Wall Street waiting for her, but she does have common sense: “I’m here to tell you that, unlike you, my generation will not give up without a fight.”