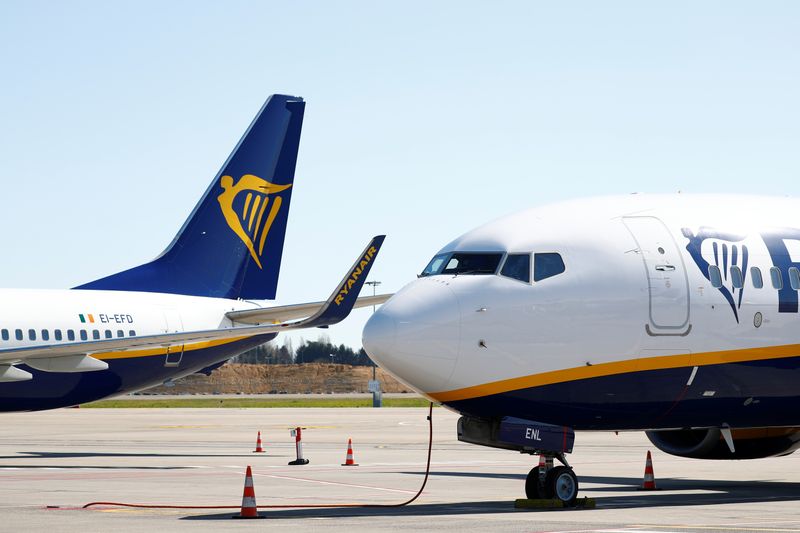 Europe’s largest budget airline said the impact of the coronavirus meant it was not able to provide guidance for 2021.

It reported 2020 traffic up 4% to 149 million passengers, but that was short of the 151 million it had expected as of March 10 and lower than its earlier target of 154 million.

Ryanair has been forced to park much of its fleet. It is currently operating fewer than 20 daily flights, or less than 1% of its normal schedule of more than 2,500 flights.

For 2020 it expects to report a pre-exceptional profit after tax at the lower end of 950 million ($1.03 billion) to 1 billion euros, it said on Friday.

That is a slightly narrower range than the 950 million to 1.05 billion euro it gave in February.

The 300 million euro exceptional charge it will take for 2020 relates to the ineffectiveness on its 2021 fuel hedges.

Ryanair said it has one of the strongest balance sheets in the industry, with year-end cash equivalents of 3.8 billion euros and 327 aircraft, 77% of the group’s owned fleet, debt free.

That compared to 4 billion euros in Ryanair’s last update on March 16, which Goodbody analyst Mark Simpson said suggested it was burning through 100 million euros a week in its initial handling of the crisis as it grounds planes.

The cash-burn could be cut to around 135 million euros a month if the lockdown continues into the next quarter due to cost-cutting measures, Simpson said.

He also expects Ryanair to book further exceptional charges stemming from fuel hedging in the first quarter of the financial year which has just started.

Ryanair said it was grateful to many EU governments for their “foresight and speed of response in recognising that airlines are one of the most exposed industries” but emphasised that any such support must comply with EU state aid rules.

Ryanair is scheduled to release its 2020 results on May 18.

It said it will continue to will to focus on delivering cost savings in the meantime.

Last month it deferred all capital expenditure and share buybacks, froze recruitment and cut pay by 50%.