Home
Market
Scared of Sanders presidency, Wall Street Dems double down on moderates
Prev Article Next Article
This post was originally published on this sitehttps://i-invdn-com.akamaized.net/trkd-images/LYNXMPEG221YC_L.jpg 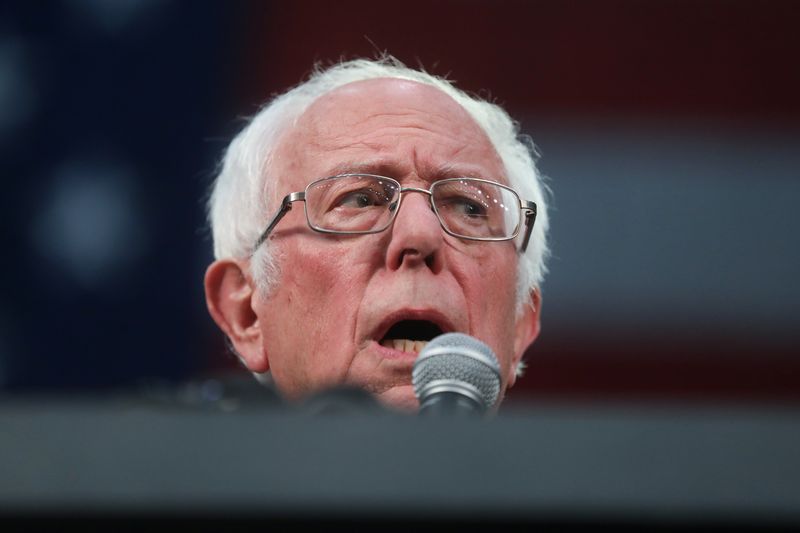 NEW YORK (Reuters) – Prominent Wall Street Democrats have been hatching strategies to ensure their presidential nominee will be a moderate, while also turning their attention to down-ticket candidates in congressional races as a “hedge” against that possibility, people involved with the efforts told Reuters.

At the center of discussions among those bankers, hedge-fund managers, private-equity bigwigs and prominent investors is this: making sure Vermont Senator Bernie Sanders does not get the nomination. Instead, they are primarily supporting former Vice President Joe Biden.

“He is the new hope of the moderates,” said Mike Novogratz, a cryptocurrency investor and former Goldman Sachs Group Inc (NYSE:) partner and hedge fund manager. Novogratz said he’s an “anybody but Trump guy” but would be pained to vote for Sanders.

Few of the 14 people Reuters spoke to wanted to be on the record for this story, but many said they are also happy to vote for former New York City Mayor Michael Bloomberg, a billionaire with ties to Wall Street. Since he came into the race late, it is unclear how he will perform in “Super Tuesday” elections, where he will be a candidate for the first time across 14 U.S. states.

Some Wall Streeters are also putting money and energy behind Democrats who are challenging Republican incumbents in key congressional races. The candidates include Theresa Greenfield and Mark Kelly, who are attempting to flip GOP-held Senate seats in Iowa and Arizona, respectively.

A fundraising group called 2020 Senate Impact has attracted some of their support.

It is funneling money to races in Iowa, North Carolina, Texas and Arizona, among other states, according to the Center for Responsive Politics. Major financial supporters include Political Action Committees (PACs) related to investment banks, private-equity and other investment firms.

The central watercooler debate among the Wall Street moneyed set has mostly been about whether they will have a presidential candidate they can stomach voting for.

Sanders has described himself as a socialist in the past, which rubs capitalists the wrong way. He supports progressive policies, like health insurance for all Americans, that would result in higher taxes for the rich and for corporations.

However, incumbent Republican President Donald Trump has rankled some of the establishment with conservative policies on immigration, trade and the environment, as well as his sometimes-uncouth demeanor.

On Sunday, Trump shrunk down behind a podium during a campaign event to make fun of Bloomberg’s height. He has made offensive comments about women, Muslims and disabled people in the past.

While one major Democratic investor predicted his peers would “sit out” if it came to a Sanders-Trump contest, others said former Goldman Sachs Group Inc CEO Lloyd Blankfein has represented the general Wall Street view in his public statements.

“I might find it harder to vote for Bernie than for Trump,” Blankfein said in a recent Financial Times interview.

Democrats in finance are not alone in their feelings.

Americans across the board have struggled with which candidate to support, based on who represents their own interests as well as who is viewed as the most “electable.”

It is also hard to tell how things will go ahead of Tuesday’s primaries. Sanders has more delegates than any other candidate — six more than Biden — and polls have waffled, sometimes inaccurately, on which candidate is on top throughout the race.

The elimination of several other middle-of-the-road candidates in the presidential race — especially Pete Buttigieg, who dropped his bid on Sunday — has helped solidify Wall Street support behind Biden and Bloomberg, sources said.

Massachusetts Senator Elizabeth Warren is another consideration. Although she has lost steam from the start of the primary contest, she has been able to raise substantial funds while also being a thorn in Bloomberg’s side about his prior statements about women and sexual-harassment allegations at his company.

Florida-based hedge fund manager Michael Lewitt may have summed up the industry’s view in his newsletter this week, asserting that Biden is the “best candidate” who could win battleground states, and that Bloomberg could also do a good job, but that Sanders would turn the country into mayhem with his policies on taxes, healthcare, banking and the like.

“I am proudly and publicly supporting Biden,” Lewitt told Reuters. “I am supporting Joe in every way possible.”