Home
Market
Selling abates after virus causes worst day since October
Prev Article Next Article
This post was originally published on this sitehttps://i-invdn-com.akamaized.net/trkd-images/LYNXMPEG0R0OX_L.jpg 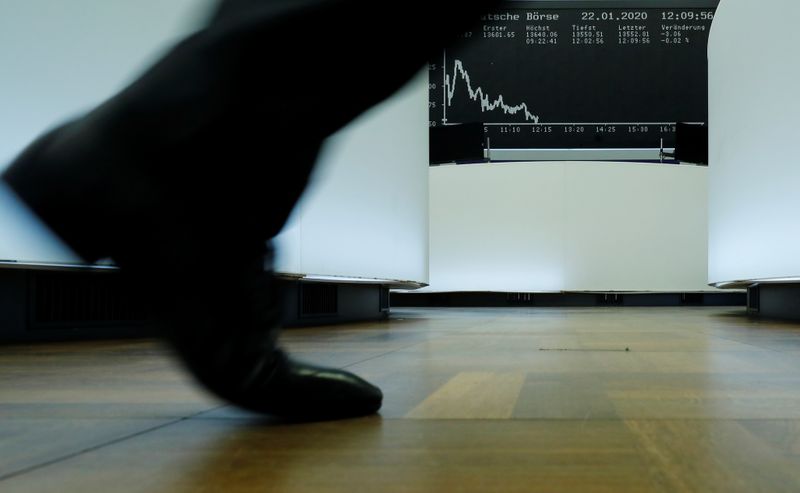 LONDON (Reuters) – European markets rebounded early on Tuesday after the previous day’s thumping, which saw investors worried about the economic fallout from the coronavirus outbreak in China huddle in safe-haven assets.

There was relief as Europe’s and Wall Street futures bounced as much as 0.5% from their closing levels on Monday, which was the worst day for world stocks since October.

Chinese markets remain closed all week, but the 0.5% overnight drop in Tokyo’s was more modest than Monday’s and many of Asia’s other bourses that were open rallied from the day’s lows too.

“We saw a bit of a bounce back overnight in the most high volume liquid assets like the , but its hard to find anything to hang your hat on because we still need to assess the risks,” said Saxo Bank’s head of FX strategy John Hardy.

As the death toll from the flu-like virus reached 106 in China, the country extended the Lunar New Year holiday to Feb. 2 nationally, and to Feb. 9 for Shanghai.

China’s largest steelmaking city Tangshan, in northern Hebei province, suspended all public transit in an effort to prevent the spread of the virus.

MSCI’s broadest index of Asia-Pacific shares outside Japan had ended down 0.8%. Japan’s Nikkei, which was down nearly 1% at one point, closed 0.6% lower. Australian shares ended 1.3% down and South Korea’s Kospi index skidded 3%.

In an indication of the size of losses for Chinese stock markets when they re-open, iShares China Large-Cap ETF sank 4% on Monday. It is down about 10% since Jan. 17, when worries began to intensify about the virus which emerged in the central Chinese city of Wuhan.

“The wild card is not the fatality rate, but how infectious the Wuhan virus is,” Citi economists wrote in a note. “The economic impact will depend on how successfully this outbreak is contained.”

Moreover, as major companies report potential business disruptions and governments advise against unnecessary travel to and within China, analysts are trying to compute how much the disruption could damage growth.

Tech titan Apple (NASDAQ:) is due to report results later, and its plan to ramp up iPhone production by 10% in the first half of this year will be the top question as the coronavirus outbreak spreads across major markets like China.

“The market will continue to watch the number of how many people become infected,” said Christian Lenk, an interest rates strategist at DZ Bank.

“But the interesting part will be how much the virus and the contamination efforts of the Chinese government will hamper supply chains and growth and that is really hard to grasp in the short term.”

Some investors have dipped their toes in guessing that inflation will be weaker, with market gauges of long-term expectations falling to their lowest in 1-1/2-months in the euro zone at 1.2640%.

The yield on the benchmark German Bund was flat at -0.385% DE10YT=RR, though not far from the three-month low -0.391% it fell to on Monday. Yields across other European markets, including Italy and Spain, were also stable.

In the United States, a two-day Federal Reserve meeting starts later. The market consensus is that the central bank will keep interest rates unchanged at between 1.5% and 1.75% but all attention will be on whether it thinks about the virus woes.

Chinese authorities may also have more limited room to stimulate the economy than it had during the 2002-03 outbreak of the Severe Acute Respiratory Syndrome (SARS) virus, another reason investors were jittery.

Treasury 10-year note yields were off lows after diving as deep as 1.598%, the lowest since Oct. 10, while Fed fund futures <0#FF:> have rallied in recent days as investors priced in more risk of a rate cut later this year.

Futures now imply around 35 basis points of easing by year-end.

JPMorgan (NYSE:) said it has not yet altered its developed or emerging markets forex forecasts though it was taking profits on “bullish” positions and remains “considerably long” on Swiss francs, which benefit from safe-haven demand.

Short build-up in the was another risk hedge. The currency was last flat at $0.6760 after two straight days of losses. The euro was a shade firmer at $1.1022 while the yen’s dip looked set to end five straight sessions of gains.

“(Gold) could reach $1,600, but would be more around the $1,570-$1,590 levels as we need to get more information, there are a lot of unknown variables around the virus,” said John Sharma, an economist at National Australia Bank (NAB).