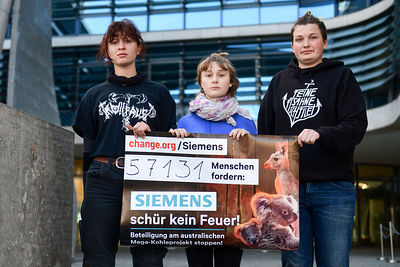 Climate activists hold a poster reading “57,131 people ask: Siemens, don’t poke the fire! Stop your investment in the giant coal project in Australia” as they demonstrate in front of the headquarters of German industrial behemoth Siemens on January 10, 2020 in Munich, southern Germany.

Speaking at the World Economic Forum in Davos, where sustainability is a main theme, Kaeser told MarketWatch: “The theme this year is about green. I don’t hear much about innovation, technology, growth and opportunities. So it’s interesting how things develop.”

Activists from Extinction Rebellion have been protesting in Munich at Siemens’s main office after climate activist Greta Thunberg asked Siemens SIEMENS, +0.32% to reconsider participating in the coal mining project.

The firm will provide signaling for a railway that is transporting fossil fuel across Queensland in Australia. Siemens said last week it would still push ahead with the project, after having taken some time to reconsider its position.

Kaeser told MarketWatch: “We don’t even supply the locomotives and the train to transport the coal. They are running already without us. The only one thing we do…[is] put a signaling system on the locomotive to make the ride safe for people and goods.

“There’s zero impact on whether coal goes on that line or not. Environmentalists say, oh we’ve got a multinational big brand, those guys are at the forefront of environmental care…we are the role model. Now we’ve got to go after them.”

The boss of what is one of Germany’s biggest firms dismissed the efforts by protesters to force Siemens to change its mind: “The impact is zero, there has not been any movement on the share price. Reputational impact is there, and we need to educate and inform the general public about what the facts are and how we deal with them.”

On Tuesday U.S. President Donald Trump also criticized the green lobby in a keynote speech at Davos, where he referred to climate activists as “prophets of doom.”

He said: “These alarmists always demand the same thing—absolute power to dominate, transform and control every aspect of our lives.”

This article is part of Barron’s Group’s ongoing coverage of the World Economic Forum in Davos, Switzerland.