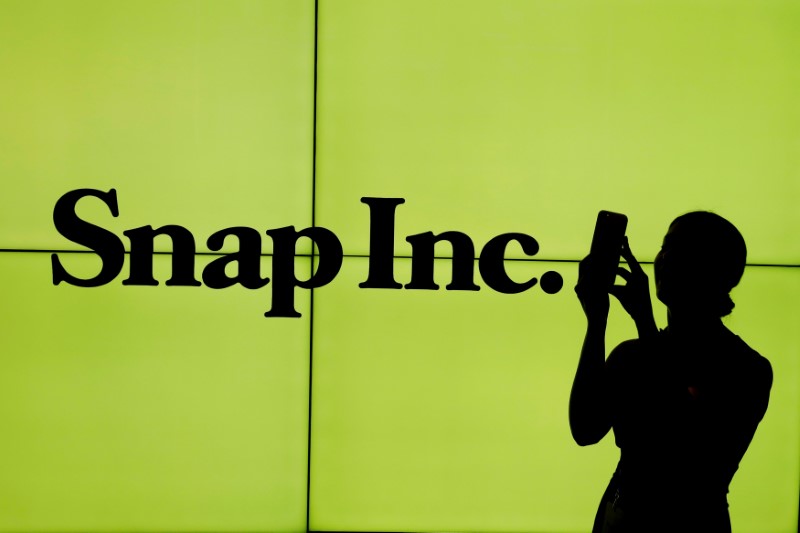 © Reuters. FILE PHOTO: A woman stands in front of the logo of Snap Inc. on the floor of the New York Stock Exchange in New York City

Snap, which owns the popular photo messaging app Snapchat, had earlier warned its peak advertising demand period, which runs between the Black Friday and December holidays, had one fewer week.

Revenue, which the company generates from selling advertising on Snapchat, rose 44% to $560.88 million, but missed the average analyst estimate of $563.03 million.

While Snap has invested in a self-serve platform to make it easier for advertisers to buy ad space, it is still a long way from stealing ad dollars from Alphabet Inc’s (O:) Google and Facebook (O:), which command a huge portion of the digital advertising market.

Snapchat has only 0.5% of worldwide digital ad revenue, while Facebook accounts for 21.1%, according to a report by market researcher eMarketer.

Snap said daily active users (DAU) on Snapchat rose 4% to 218 million in the three months ended Dec. 31, from the prior quarter.

The user metric stood at 186 million a year earlier.

Snapchat rose to fame with its photo lens filters that can overlay things like dog ears on a user’s face, and has added mobile games and original shows to keep its audience on the app.

Snapchat’s DAU, representing the number of people using the app on a daily basis and a widely watched metric by investors and advertisers, was above analysts’ average estimate of 215.04 million, according to IBES data from Refinitiv.

Average revenue per user jumped 23% to $2.58 during the quarter from a year earlier.

“Given the substantial long-term opportunities ahead, we are working hard to scale our revenue so that we are able to self-fund our investments in the future,” Chief Executive Officer Evan Spiegel said in prepared remarks.

The company expects first-quarter revenue in the range of $450 million to $470 million. Analysts on average were expecting $461.6 million.