Home
Market
Southwest extends 737 MAX cancellations through June 6
Prev Article Next Article
This post was originally published on this sitehttps://i-invdn-com.akamaized.net/trkd-images/LYNXMPEG0F1BA_L.jpg 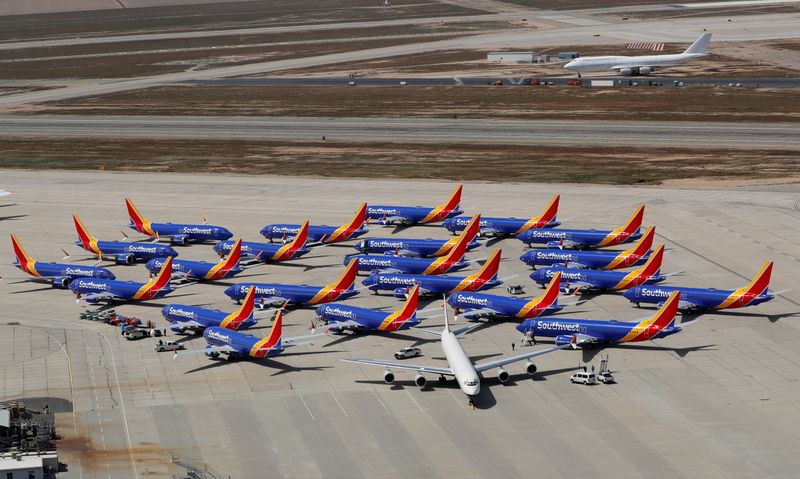 WASHINGTON (Reuters) – Southwest Airlines Co (N:) said on Thursday it is extending cancellations of Boeing Co (N:) 737 MAX flights until June 6, citing the planemaker’s decision to recommend pilot simulator training before resuming flights and uncertainty about when regulators will approve their return to service.

The decision follows a similar announcement by American Airlines Co (O:) earlier this week to extend cancellations until June 3.

The grounding of Boeing’s best-selling plane, which came in March after a second deadly crash, now threatens a second summer travel season. The death toll for the two crashes, the first in Indonesia and the second in Ethiopia, was 346 people.

Once the Federal Aviation Administration (FAA) gives 737 MAX approval to return to service, airlines will need at least 30 days to prepare the jets and its pilots for commercial flights, airline and union officials have said.

It is still unclear how much time the FAA may require pilots to spend in simulators before they can resume flights.

Reuters has reported the FAA will not approve the return of the MAX until February and it could slip until March or later. Last week, Boeing said it would recommend requiring all pilots to undergo simulator training before resuming flights, which may also push back the resumption of commercial flights.

Southwest said last month it reached a confidential compensation agreement with Boeing for a portion of a projected $830 million hit to 2019 operating income arising from the grounding of its 737 MAX aircraft and said it would share with its employees proceeds of about $125 million from Boeing.

The U.S. planemaker is revising the 737 MAX software to require a key safety system tied to both crashes to receive input from two sensors and has added significant additional safeguards.

Boeing and the FAA are still separately reviewing a wiring issue that could potentially cause a short circuit on the MAX.

The grounding is already having significant economic impacts. Boeing is halting production of the MAX this month and its biggest supplier, Spirit AeroSystems Holdings Inc (N:), said last week it plans to lay off more than 20% of its workforce in Wichita, Kansas.