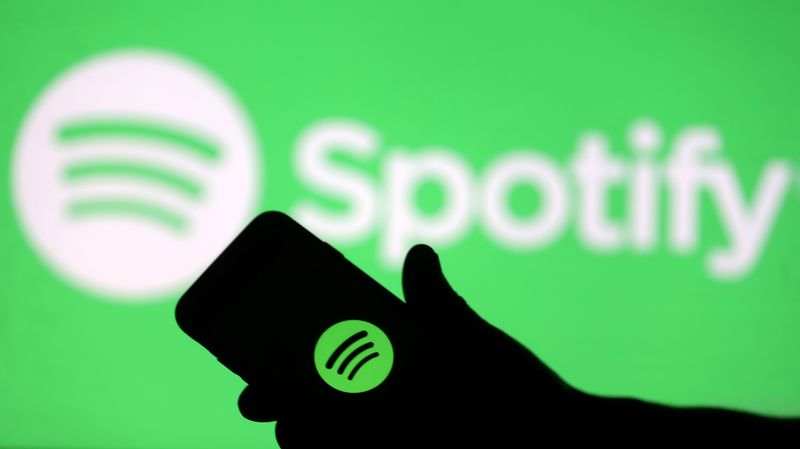 © Reuters. FILE PHOTO: A smartphone is seen in front of a screen projection of Spotify logo, in this picture illustration

By Supantha Mukherjee and Kenneth Li

The company ran several campaigns in the quarter, including a “3 months on us” intro offer for new users, and a win-back offer for returning customers.

Paid subscribers, which make up nearly 90% of its revenue, tallied 124 million for the three months ended Dec. 31. Analysts on average expected 122 million, according to FactSet.

The company also forecast first-quarter premium subscriber numbers largely in line with estimates. It expects total premium subscribers in the range of 126 million to 131 million for the first quarter compared with the estimate of 128 million, according to FactSet Estimates.

But Spotify reported a decline in average revenue per user (ARPU) for the fourth quarter.

“Our ARPU was down 5% in Q4 and we expect similar declines for 2020,” Chief Financial Officer Paul Vogel told Reuters.

Spotify also said it bought Ringer, the sports and entertainment podcast network founded by Bill Simmons, for an undisclosed price.

The company, which launched its music service over a decade ago, has invested over $500 million to build its podcast business and currently has over 700,000 podcast titles.

It has seen its podcasts such as “The Joe Budden Podcast” and “My Favorite Murder” gain a loyal following, and bring in more ad dollars.

It also forecast first-quarter revenue below estimates. Spotify expects total revenue in the range of 1.71 billion euros to 1.91 billion euros for the first quarter. Analysts were expecting revenue of 1.90 billion euros.

The company reported a loss attributable to shareholders of 209 million euros or 1.14 euros per share, hurt mainly by social costs in Sweden.